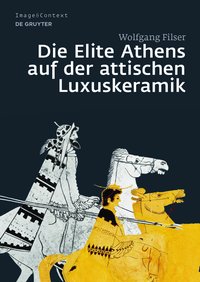 The contention of this book is that the history of the Athenian élite in the sixth and fifth centuries is best traced not through texts but through images. It is representations of members of the élite on Athenian painted pottery that give us the richest information on the changing behaviour and position of the élite at Athens. Three initial chapters discuss how the rich got rich, Veblen's Theory of the Leisure Class from 1899 and its applicability to classical Athens, and the changing position of the elite from Solon to the end of the Peloponnesian war, but the core of the book is provided by three long case studies of the changing representation of elite behaviour on Athenian pottery - concerned in turn with the symposium, athletics, and handling horses.

Filser reads out of the changing iconography of Athenian pottery, changing relations of the Athenian élite to the activities depicted. Drawing attention to the differences in what the Athenians represented at different periods is important, there are some wonderful and unusual collections of images here (e.g. of scenes of athletes from the second half of the fifth century), and there is much compelling description of individual scenes, but can we use this evidence to tell the story of the changing position and priorities of the elite?

The idea that Athenian painted pottery might be studied for its subject-matter, not just its painters' hands, was decisively put on the agenda by the publication of La cité des images: religion et société en Grèce antique (Paris, 1984). That book looked at how a series of aspects of Greek life (war, sacrifice, hunting, the life of women, religious festivals, drinking and revelling) were represented on Athenian black- and red-figure pottery. Its authors were, however, cagey about how the representations might relate to life - as Vernant noted in his Preface "La palette de formes figurées que chaque civilisation élabore ... apparait toujours come le produit d'un filtrage, d'un découpage, d'un codage du réel suivant les modalités qui lui sont propres" (5).

Filser is both conscious of the complexity of the mechanisms selecting what gets depicted, and cavalier about it. He insists that the lifestyle of the Athenian elite was certainly the inspiration for these images, and he takes this to justify ignoring the fact that most surviving Athenian pottery was consumed by non-Athenians: it is "methodisch zulässig die Fundkontexte der Vasen ... zu vernachlässigen" (3) (later, however, he invokes what happens to the Etuscan market to explain the decline of athletic scenes [374, 572]).

Important for Filser's argument is the short chapter which prefaces his discussion of the imagery. Here he collects non-élite imagery - of rustic labourers, traders, and craftsmen - and argues that the dearth of such imagery reinforces the sense that normally pottery offered scenes of élite life for emulation. Leaving aside the (important) issue that to depict scenes of 'consumption and time wasting' is not necessarily to depict the élite (the gymnasium and palaistra were not purely élite institutions, if we believe [Xenophon] Constitution of the Athenians 1.13, 2.10), the very large numbers of scenes showing hoplites and light-armed troops, who were neither part of a narrow elite nor wasting time or resources, undermine the claim that "normalweise sieht man ... der Güter und Zeit verschwundenden Teil, die leisure class Athens" (126).

The reader has to wait for the conclusion for a clear exposition of Filser's interpretation of the changing choices of scenes of the symposium, athletics and handling horses. That interpretation depends both quantitative and qualitative arguments.

Quantitatively, Filser invokes the distribution of the numbers of each of these classes of scene painted in each decade (scenes in which figures are identified or identifiable as heroes, or as satyrs, are included in these numbers alongside scenes where the figures are anonymous, and black- and red-figure are counted together). These numbers are presented in three graphs (Tafel IX): representations of the symposion and of athletes peak around 500, those of horses around 520. The numbers variously link to historical events - as in the claim that "Der extreme Popularitätsgewinn des Bildes vom Symposion koinzidierte mit der Rückkehr der Elite aus dem Exil" (569) - or are explicitly disassociated from them - as in "das kaum von den sozialen und politischen Veränderungen der nachkleisthenischen Zeit betroffen war" (572), to explain why athletic scenes continue in large numbers and do not fall off after 470 as images of the symposium and horses do, (despite insisting that athletics "war auch stets eine unangefochtene Domäne der leisure class" [572-573]).

Filser casts his net wide, but arguably he does not cast it widely enough. To understand what is changing in particular areas of imagery, we need to see what is happening in the whole range of imagery. The absence of scenes of soldiers is particularly telling here, since the changes that happen to those scenes both offer a better chance of comparison with historical events than any other sort of scene and in fact turn out to parallel changes in the images of athletes in ways that suggest a common explanation is required. Might changes in imagery not be influenced by changes in aesthetics? The 'Greek revolution', which falls centrally in the period under discussion, goes completely without mention.

Filser's grounding assumption, that these images not only show elite behaviour but are in some sense about elite behaviour, seems itself too narrow. Might scenes of drinking not be about drinking? The presence of signs of luxury do not necessarily make the scene a commentary on luxury. Future work will certainly need to take account of Filser's many valuable and original observations of iconographic changes, but his explanations of those changes seem less likely to stand the test of time.