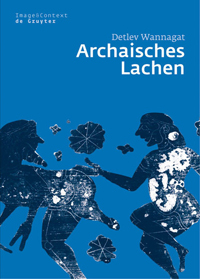 Anyone who turns to this wonderful book for insights about laughter, or more particularly what might be different about archaic laughter, will be disappointed. Wannagat is not really interested in laughter: his bibliography does not even include Stephen Halliwell's monumental Greek Laughter: a Study of Cultural Psychology from Homer to Early Christianity (Cambridge, 2008). What he is interested in is what is going on in scenes on Corinthian pottery of the seventh and early sixth centuries (he is not much interested in date, either) which include the figures that have become known as 'padded dancers' (and figures that can be closely related to them). And what this book shows is just how much is going on, and how valuable really close observation is to the art historian. By painstaking comparisons Wannagat is able to shed light on even the most obscure and puzzling scenes, and to show that there is as much of a discourse going on between images on Corinthian pottery in the archaic period as there is between images on classical Athenian pottery.

Padded dancers have attracted quite a lot of previous scholarly attention, but earlier publications have either buried their observations through not providing adequate illustration (so A. Seeberg's Corinthian Komos Vases (London, 1971)) or have not looked closely at individual scenes (so T. J. Smith's Komast Dancers in Archaic Greek Art (Oxford, 2010)). Wannagat's book is wonderfully illustrated, with drawings to clarify where photography is inadequate, but its primary virtue is the author's power of observation. The drawing on these pots often seems crude and it is easy to overlook or dismiss peculiarities. Wannagat takes every peculiarity seriously, and through extensive comparison, not only with other Corinthian pots but with Boeotian, Athenian, and other Greek regional traditions, is able to elucidate what is happening.

What is happening turns out to be the exploration of incongruously bad behaviour involving sex, excrement, piss, deformity, violence and cowardice. Wannagat organises his treatment through chapters on 'Bodies' (which examines the exhibition of deformity and of sexual activity), 'Battles', and 'Heroes'. After each major section he helpfully offers a summary of his argument, bringing out the overall shape of his findings (astonishingly and most regrettably, however, the book has no index beyond an index of the museums from which the pots illustrated come). In the case of 'heroes', the summary does little more than point out how the particular scene that Wannagat has unpacked at length and with great care works. But in the case of deformity, sex, and violence his findings are striking.

What is striking about deformity is the frequency with which figures with deformed limbs are found. Wannagat is able to show not simply that, despite the close allusion to particular types of limb deformity that occur in human populations, the levels of deformity exceed those which we would expect in a historical society, but that Corinthian artists are distinctly more interested in deformity than painters of pots elsewhere, with a particularly strong contrast to Laconia and to Athens (where Hephaistos is very much singled out by his deformed legs), and a lesser contrast to Boeotia, where in the sixth century motifs common in earlier Corinthian pottery become prominent.

A similar pattern is found also in scenes of violence, where neither Athenian nor Laconian artists interest themselves in such scenes, but parallels are found in Boeotia. In both cases, of scenes of violence and scenes with figures with deformed limbs, artists exploit the incongruous and worrying in a way that tells us more about what was excluded from than what was routine in everyday experience.

Wannagat is inclined to subsume this sexual activity under the sign of phallic business at festivals and to invoke Bakhtin. But waving around an outsized phallos is rather different from being buggered. Wannagat, who cites Davidson on the kinaidos as a figure of insatiable sexual desire, is right to see buggery here as a sign of sexual excess, but by treating the padded dancers alongside Tyrrhenian amphoras and other Attic material he ends up underplaying the historical significance of the prominence of sexual excess within the visual discourse that he so clearly illustrates.

What are we to make of the Corinthian development of the padded dancer to explore what was censored out of daily life? As Wannagat sees, padded dancers do for Corinthian painted pottery what satyrs do for Attic: they offer a costume that distinguishes its wearer from observed life and frees him up to behave in ways that would be unacceptable in life. But whereas satyrs are primarily invoked at the symposium, padded dancers are invoked also on alabastra, that is in contexts likely to be gymnasial rather than sympotic. As the pederastic acclamations found inscribed on rocks in Thera or Thasos suggest, dancing and fooling around were not limited to the symposium or the celebration of religious festivals in sanctuaries.

Showing censored behaviour acquires a particular frisson when it happens in a context where license is allowed. Wannagat himself seems to wants to insist on the laughter involved in viewing these images as part of a strategy to distance what is shown: for him the scenes "leave the observer uninvolved" (291, 296). But the differential take-up of different aspects of this imagery by other regional pot-painting traditions points to significant sensitivities, such as are unlikely to be felt unless viewers considered themselves very much involved.

Wannagat's work can only make us look more closely at what is happening in archaic figured representations of all sorts. The challenge that it lays down is to situate these particular Corinthian iconographic choices into a wider story of the conduct of life in the archaic Greek world.