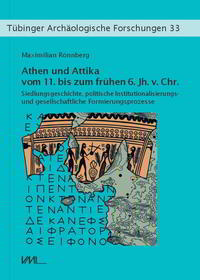 Back in 2016 I agreed to write on Archaic Athens for the Oxford History of the Archaic Greek World edited by Paul Cartledge and Paul Christesen (the volume should appear in 2023). At that point there were no comprehensive discussions of Early Iron Age Attica, and the fullest collections of archaeology evidence dated from the 1980s and early 1990s. Since 2016 the study of Early Iron Age Athens has been transformed by the appearance of three great volumes: John Papadopoulos and Evelyn Smithson's long awaited The Early Iron Age, Part I: The Cemeteries (Princeton, 2017), volume 36 in The Athenian Agora series; Annarita Doronzio's Athen im 7. Jahrhundert v. Chr. Räume und Funde der frühen Polis (Berlin, 2018); and Eirini Dimitriadou's Early Athens: Settlements and Cemeteries in the Submycenaean, Geometric and Archaic Periods (Los Angeles, 2019). Now, with this volume, the study of Early Iron Age Attica is similarly transformed.

The scale of Rönnberg's study is prodigious - as the 127 (two-column) sides of bibliography alone indicate. In successive sections, he covers politics, settlement, burial, and religion. These discussions are supported by a complete list of sites from which archaeological material from the eleventh to the sixth centuries has been found, an index of burial sites by period, a list of every Athenian pot found in Athens/Attica with figural decoration (1006 of them), and a list of "Orientalia" found in Attic contexts (178 items). There are 24 diagrams, 54 maps, and 22 other plates. There is also a short (4-side) synthesis, in each of German, English, and Greek.

Rönnberg's approach is to tell a clear story in his text, and to put the supporting detail into footnotes. Many pages have more footnote than text, with the footnotes often then sending the reader to the site catalogue. This has the admirable consequence that the reader is never in doubt about how Rönnberg makes sense of the copious evidence, which he keeps under miraculous control. The only drawback of this approach is that readers have to make considerable investment in order to decode the reference system for the site catalogue if they are to make the most of the data given. Rönnberg has chosen to arrange his catalogue by region, listing separately, and in this order, South Attica (AS), East Attica (AO), Northeast Attica (ANO), West Attica (AW), Northwest Attica (ANW), North Attica (AN), Salamis (SA), Around Athens (P - itself subdivided into South, East, Northeast, etc.), and Athens (AT). Each catalogue entry begins with one of these acronyms, then has an acronym for the place (e.g. TH for Thorikos), another for the type of site (N for cemetery, H for sanctuary, OF for other finds, EF for a single find, S for settlement). Unhelpfully these acronyms do not appear in the list of abbreviations, and the catalogue is in the order given above, not in the alphabetical order of the acronyms by which catalogue entries are headed.

With regard to settlement, Rönnberg rejects the notion that Attica was "recolonised" from Athens at the end of the Dark Ages, suggesting that a model of "local, decentralised fissioning events" (159-65, summary 263) is preferable. With regard to burial, Rönnberg points out that the recent Phaleron excavations have produced so many seventh-century burials that there is now no decline in burials per generation at the end of late geometric. Rönnberg regards numbers of archaeologically known burials as less significant than whether large communal cemeteries prevail and whether graves are marked. He sees the return of large communal cemeteries, and the rise of grave markers, in the eighth century as drawing marked graves to the notice of a larger community, and so as part of the consolidation of an elite after an earlier period of social fragmentation. Rönnberg stresses that the increase in sanctuary activity in the late eighth and seventh century is an increase in activity at places which were prominent only locally, indicating the emergence of and competition within and between local elites.

Rönnberg acknowledges that his own view is "gradualistic" and argues that it is the seventh century, even more than the eighth, that is "enscheidende Formierungsphase" ("decisive formation phase", 261, 265). This is in part a product of Rönnberg's view that the "first conspicuous increase in state-ness in Athens" ("der erstmaligen deutlichen Zunahme von Staatlichkeit", 262, 265) occurred between the later seventh and mid-sixth century. Rönnberg achieves this view by taking a sceptical attitude not simply to the traditional date for the earliest Athenian archons but to the historicity of Solon's laws. He has convinced himself that Attica was not a political unity until the sixth century, that only then did Athens itself function as a religious centre, and that there was no cultural unity to Attica.

I remain unconvinced on all these fronts. These conclusions depend both on setting aside evidence and on assuming that absence of evidence is evidence of absence. We need good grounds for disregarding ancient textual evidence: if we deny that what is handed down is historical, we need to explain why that story was invented. In the case of Solon's laws, for all that there are certainly later laws ascribe to Solon, "archaic" features of those laws, their coherence as a set, and the traditions about the structure of the code of which they are part, need to be explained. In the case of Athenian religious unity, we need to explain why from the late eighth century dedications appear on the Athenian Acropolis that are unparalleled at other Attic sanctuaries. And in the case of Athenian cultural unity, we need to beware of mistaking the trees for the wood: cross the border into Boiotia or Corinth and the burial practices and assemblages reveal what true cultural difference is. The very Phaleron excavations which so usefully allow Rönnberg to complicate Morris's story about the social background to changing burial numbers also, by revealing 79 young men executed at a single moment and buried in a single grave, have shown the considerable extent of seventh-century state power.

The value of this book does not depend, however, on whether or not Rönnberg is correct in his conclusions. Its value lies in the way in which it makes the evidence available and points up the questions that must be asked. Together with the works of Papadopoulos, Dimitriadou, and Doronzio (to which should now be added also Nathan Arrington's Athens at the Margins: Pottery and People in the Early Mediterranean World (Princeton, 2021)), Rönnberg's book will surely start a new era of discussion of early Athens and Attica.