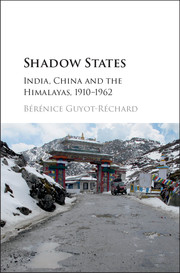 Prehistory and history of the war between China and India in late 1962 provide an overall not too-well investigated field of research. In China, it is a "forgotten war" [1], whereas for India the humiliating defeat remains the very trauma of post-independence historiography. Accordingly, the Indian debate until today is mostly attempting to find the culprits - Prime Minister Jawaharlal Nehru, Defence Minister V.K. Krishna Menon, the military leadership or the administration of the border areas. Due to the until recently difficult access to sources, the focus of researchers has mostly been on the legitimacy of the territorial claims. Before Indian documents became accessible in parts, the by far best study of the conflict was provided by Steven A. Hoffmann [2].

The 50-years anniversary of the military conflict has taken care for renewed academic interest: Whereas a volume co-edited by the reviewer focuses on bilateral relations, third-power involvement and consequences for Indian domestic affairs [3], Bérénice Guyot-Réchard, currently lecturer in twentieth century international history at King's College London, in the monograph based on her PhD-thesis has chosen an innovative and useful approach. Her analysis of the competition between China and India around the Eastern Himalayas is mostly a bottom-up history, focusing on the little-known actors, peoples and local events in what nowadays forms the Indian state of Arunachal Pradesh. Major decisions as taken in Beijing and Delhi are taken into account only to the minimum necessary extent.

The first of three main chapters covers the years between 1910 and 1950 when both countries started competing around the Eastern Himalayas without resorting to force against each other. As Guyot-Réchard points out, British and Chinese interest in the area was of a temporary nature, limited to a few years before the outbreak of the Great War and during the Second World War. Even then, there was but a fair-weather state, its representatives not sure to return the following year. In between, what was classified as largely unexplored tribal area beyond British India proper or under loose control of de facto independent Tibet, was mostly left to itself. The pattern of (British) India and China as shadow states, however, surfaced in those early years already: Whatever one side did to establish control over the people of the Eastern Himalayas had an impact on the other rivalling side.

The picture changed with Indian independence and the establishment of the People's Republic of China, soon followed by the incorporation of Tibet, covered in the second main chapter (1950-1959). What began was a battle for the hearts and minds of the locals in terms of developmental policies. The subchapter "The Art of Persuasion" is a particular remarkable one in an extraordinary book, first, for clarifying that against the dominating perception of Chinese rule over Tibet the emphasis initially was on peaceful means and mutual understanding. Due to lack of Chinese documentary, Guyot-Réchard, however, second, focuses on the Indian attempts, her analysis based on high-quality documentary she has unearthed mostly in Arunachal Pradesh. Investigating the interaction of individual officers with various ethnic groups, highlighting the role of interpreters and small welfare schemes as dispensaries, hospitals and schools allows drawing a picture of realities and difficulties on the ground as to large parts missed by the higher echelons in Delhi. The author emphasises the contradiction in the "philosophy" behind Indian politics in the Northeast, namely between genuine attempts to allow "tribals" to preserve their traditional way of life and the need to form a nation. Efforts to separate the peoples of the hills from the influence of the plains created an artificial image of "primitives" but did not work out in practice.

The last main chapter of the book covers the rather well-researched immediate prehistory of the 1962 war, characterised by mutual rapid militarisation after the outbreak of the rebellion in Tibet and border clashes between Chinese and Indian forces. In the Indian case, this meant turning away from the hitherto prevalent Indian "philosophy" as military needs from now on overruled carefully balanced development policy. As Guyot-Réchard points out, the focus shifted from winning people to protecting a boundary. The "tribals" became victims of this shift: Crossing over the border for trade and pilgrimage had been part of their lives for centuries. Sealing the boundary meant cutting them off from their living and their spiritual roots in Tibetan monasteries on the Chinese side.

When exploring the war from late 1962, Guyot-Réchard, again, provides new insights: The People's Liberation Army both overwhelmed Indian military forces and tried to win the hearts of the locals which came under their control for a couple of weeks. Unlike Indian forces, their Chinese counterparts did not demand porterage or food but built roads on break-neck speed where the Indians had taken years. The PLA, partly only weeks after the unilaterally declared cease-fire, left the area with the promise that should the "tribals" ask for their help Chinese forces would return. It turned out, however, that Beijing had won the war but lost the parallel propaganda battle: Thanks to Tibetan refugees well informed about Chinese policy towards the north of the boundary, the locals preferred to deal with weak India, granting them more freedom and - willy-nilly - more room to manipulate the state to their own benefit.

In 2014, to no surprise Guyot-Réchard's thesis won the Cambridge University's Prince Consort Prize and Seeley Medal. The monograph is truly outstanding for the unearthing of hitherto unknown archival materials, its innovative approach leading to numerous new insights on seemingly well-researched issues and its balanced judgments on controversial issues. This is equally true for clarity and style of writing, which, hopefully, will take care that this highly relevant book will be acknowledged not only by specialists, but also reach the broader public. One looks forward to Bérénice Guyot-Réchard's next monograph.