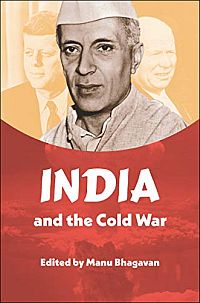 The opening of Indian archives has resulted in a flood of publications on post-independence history. Manu Bhagavan's volume provides a multitude of approaches: next to diplomatic history, interstate conflicts, international bodies and negotiations, it provides chapters on development policy, popular music and film, and an analysis of Indian political thought. Much of the book, however, presents the state of research of (at best) 2015/6, and individual chapters do not refer to each other. Most authors focus on the early Cold War; even the Bangladesh crisis of 1971 is missing. Accordingly, Bhagavan holds that after Nehru, India was unable to set an agenda on the global stage (9).

The introduction reflects Bhagavan's own research on India, the United Nations and diplomat Vijayalakshmi Pandit. However, his expertise thins out in the mid-1950s. It is not correct that India's Ambassador to Moscow, K.P.S. Menon, who exercised a strong influence on Nehru, was not available during the initial stages of the Hungarian uprising in 1956 (7). The confusion in Delhi about what actually happened in Budapest resulted from him and Krishna Menon, Nehru's chief advisor on foreign affairs, discrediting the accurate accounts of the local Chargé d'Affairs M.A. Rahman. The diaries of then Foreign Secretary Subimal Dutt [1] contradict Bhagavan's account.

The three chapters on diplomatic history are somewhat disappointing. Srinath Raghavan's contribution is mostly a summary of his earlier research on the Indian-Chinese boundary conflict, [2] not including the new material and insights to be found in the work of Bérénice Guyot-Réchard [3], Dutt's biography or a volume on the India-China Border War [4]. In her article about the Indo-US-Pakistani triangle from 1949 to the mid-1950s, Pallavi Raghavan miraculously overlooks the First Kashmir War (1947/8) and its lasting effects. Her assessment that Pakistani approaches towards Washington were driven by anti-communism rather than fears of India is untenable; inaccuracies like the demotion of Secretary-General Girja Shankar Bajpai to the rank of Foreign Secretary complete the picture. Swapna Kona Nayudu has drawn a one-sided account of Indo-Soviet rapprochement in the years between Stalin's death and the Hungarian uprising. She ignores staunch resistance in the cabinet and the ministries even before Khrushchev's anti-Western propaganda speeches while in India in 1955. Regarding the Hungarian crisis, it is incomprehensible how the Indian abstention in the UN Security Council from a vote condemning Soviet use of force should be more relevant than the later vote with the USSR that completely isolated India. Drawing parallels between the cult of personality in the USSR and genuine admiration for Nehru (38) is absurd.

In telling the story of Pakistani singer and journalist Faiz Ahmed Faiz, Syed Akbar Hyder provides new approaches and insights. Faiz criticised Pakistan's ally America for its intervention in Iran and found much to be commended in developing communist countries. Considered an opponent of Pakistan's ruling elites, he was even sent to prison. This chapter tells how politics were 'translated' into popular music and how, in spite of the consequences, individuals chose a path beyond government politics and conventions. The case of Faiz demonstrates how much popular cultures and independent leftists shared on both sides of the boundary.

Waheguru Pal Singh Sidhu's chapter focuses on the deep involvement of Nehruvian India in formulating the rules for UN peacekeeping and, thereafter, the important role of its armed forces and diplomats in this framework. India was the one non-aligned country with a battle-hardened, large army. Nehru believed in the establishment of One World, wherefore Indians played important roles from the Korean War to the conflict in the Congo. The combination of peacekeeping, military history, history of an international body and diplomatic history makes for an excellent chapter. Rohan Mukherjee explains India's nuclear ambiguity in the years between the war with China in 1962 and its abstention from the Non-Proliferation Treaty of 1968 with status benefits. However, he merely synthesises previous theories, and this is also true of Priya Chacko's chapter on development policy, which mostly retells an old story [5].

Like Bérénice Guyot-Réchard, Anton Harder shows how the Chinese and Indian development models mirrored and rivalled each other. He demonstrates that the war of 1962 was to no small extent rooted in Chinese, Indian and Soviet assessments of divergent development models. For a short while, Mao counted Nehru among the progressive forces, but this came to an end partly because of the warming of Indo-Soviet relations and the Sino-Soviet ideological conflict. While the Soviets came to appreciate Nehruvian 'mixed economy', the Chinese saw counter-revolutionary forces dictating India's course in economic policy and foreign affairs. Harder's chapter goes beyond an analysis of rivalling development models; it provides a valuable contribution to the history of the Sino-Soviet split and the India-China conflict.

Raminder Kaur's excellent chapter on the film Aman (Peace) of 1967 proves the value of 'soft' topics, throwing light on aspects of political history and public sentiment. The starting point is an analysis of a conversation between Bertrand Russell and a fictive admirer. Russell as the old sage represents the Nehruvian ideals of a peaceful denuclearised world, whereas his disciple, again like Nehru, wants to use scientific progress for the betterment of mankind. From what is an obituary to Nehru, Kaur leads to the hardly researched topic of Indo-Japanese relations, including the Indian idea of Japan as a symbol of a non-Western modernity.

Rahul Sagar's chapter on Hindu nationalists and the Cold War is a thoughtful analysis of the roots and manifestations of Hindu nationalist thinking, tracing it back to the Hindu reformers of the 19th century. Sagar observes two central, contradictory considerations: first, Hindus form a superior civilisation, which on the one hand might contribute to the betterment of mankind, yet on the other hand must be preserved from foreign influences - a view that has much in common with M.K. Gandhi. Second, India should pursue a 'realistic' policy based on military strength and therefore on industrial capacities. The latter, however, can only be achieved by means detrimental to the envisioned traditional Hindu way of life. Hindu Mahasabha, Jan Sangh and the BJP failed to formulate a conclusive concept combining both concerns. Furthermore, they regularly changed key positions depending on developments in foreign affairs or India's economy.

In the end, numerous chapters in the book are worth reading, but the edited volume lacks a concept linking individual contributions to each other, of which a number were not up to date even at the time of publication.