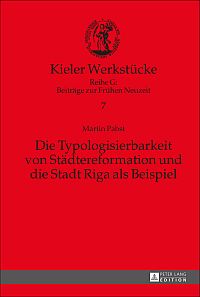 'Typologisierbarkeit'-all the parts of the word in the title exist in English, but I would be hard pressed to put them together in one. 'Typologisieren'-'to typologize'; 'bar'-'able', as in 'manageable'; 'keit'-'the abstract quality of all that', 'ity', as in 'manageability'. So, it means something like-'the quality of being able to place (or to be placed) in a typology'.

In this thought provoking book, Martin Pabst reacts to reigning typologies that have been based on one or a few criteria: North versus South; Upper (German), North, Northwest, or Hanseatic, which, in his opinion, continues the North versus South opposition. Thomas A. Brady, Jr.'s 1993 survey of the then recent literature found a rich variety of Reformations that had replaced geographical criteria with qualifiers of other sorts-'people's', 'princes'', 'urban', 'magisterial', 'radical', and 'communal'. Even this falls far short of what Pabst refers to as his Fragebogen (survey, checklist), which in the proposed variant offers exactly 90 questions of potential usefulness in each individual case study.

The book's structure is transparent. A 'Preface' is followed by an 'Introduction' that addresses methods, offers an overview of the Stand der Forschung and a discussion of fundamental definitions. A second chapter surveys models and types of investigation that have been employed up to this point, followed by a critique of them. Chapter 3, by far the longest in the book (49-174), presents, in considerable detail, the bases for the new approach that Pabst here proposes. It ranges widely across case studies in its examination of six larger topics that provide a basic model for typologizing 'the Reformation in the Cities'. They are: political structures; basic economic and social conditions; basic spiritual conditions; persons and positions, people and opinions; events and requirements; and, finally, the way to a new church life. At the end of many major and minor sections, we find in italics questions that ultimately make their way, in one form or another, into Pabst's proposed check list. Each list is preceded by the formula 'For the development of an empirically [my italics] founded classificatory typology of the Reformation in the cities, the [the above presented discussion] yields the following possible characteristics'. A few examples: 'Was the city to be investigated a member of a league of towns or another regional or supra-regional system of league-formation?'; 'Did the city council and the population of the city to be investigated have, already before the beginning of the process of Reformation, a significant experience of conflict?'; 'Did members of the populace of the city to be investigated appear as authors of theological writings or polemical pamphlets?' And so-on for 87 more.

A short Chapter IV ('The Criteria of a Classificatory Typology of the Reformation in the Cities') brings together, as an articulated list, the questions raised in the course of the previous chapter. The author leaves unexplained why we find here 14 headings (whereas Chapter III had six categories, and 31 subcategories). It has exactly 90 questions (as in Chapter III), but the questions are ordered in such different fashion, and under such different headings, that I am unable to say whether Chapters III and IV contain precisely the same questions. In any case, we may, I think, feel justified in taking the simple list of questions in Chapter IV as Pabst's proposed check list.

In Chapter V we finally come to the long-awaited study of Riga as an example of the proposed 'typologizing'. It is the second-longest chapter in book (181-259); it could be read on its own, and with considerable profit. Chapter VI brings a brief conclusion, followed by a list of abbreviations and an impressive list of primary (manuscript and printed) and secondary sources. The book lacks an index, which would have made this important work so much more useful.

Pabst emphasizes that his typological proposal adds quantity to the qualities that had previously been the benchmarks. And he implies that his approach adds an empiricalness that had been lacking. I was unable to locate the author's definition of what he means by quantity. I finally came to the conclusion that quantification results from many, many case studies that have been subjected to exactly this Fragebogen; then a computer would reveal the rates of coincidence between individual cities, and thus would arise an 'empirical' and quantifiable typology of the Reformation in the cities. I applaud the effort to add more and more detailed questions about the ways in which the Reformation came into being in a city and gave new shape to urban life. I can't imagine, however, that, were one to go in this direction, 90 would be the ceiling number of questions. Nor can I imagine a large number of scholars agreeing to use any uniform checklist. Moreover, even if a computer would do the quantifying, the scholar would still need to address the issue of which question, or cluster of questions, should be treated as more or less decisive. And that would be an end to empiricalness.

This all touches on the notion of 'the city of Riga as an example'. I think this chapter will stand on its own and make an important contribution, but there are questions here. How can Riga be an example if we don't already have a considerable body of case studies subjected to this checklist? Or is the purpose to offer a first study to be compared with others in due time? I am also troubled by the lack of sources in Latvian (or other languages of the area). One suspects here the false assumption that, since the primary sources are almost entirely in German or Latin (or, in Lithuania, in Polish and Latin), the vernaculars can be ignored. First, the use of the 'national languages' was an important part of Protestant propaganda. I would suspect there is some body of primary sources in Latvian that have importance for the Reformation in Riga (next to the German and the Latin). Second, perhaps more importantly, the archives are now firmly in the hands of the 'locals', who 'live' in their archives. These scholars are producing ever more and ever better works based on constant direct access to their archives, and outsiders interested in these problems ignore their work at their peril.

If one is to aim high, as Pabst has done, why not expand the pool of case studies to include cities where the Reformation never made an appearance (and ask why), to those where it made an appearance but had an embattled existence (in what ways), cities in which some sort of coexistence of two (or more) confessions was negotiated (and how), the existence of crypto-Arians, et cetera (and what were their conditions of existence). And many, many more.

Even if the area of investigation is limited to Free Imperial Cities, those of the Prussias, and Old Livonia (and only those where the Reformation was triumphant), scholars should avoid the anachronistic terms West and East Prussia, and use those of Royal and Ducal Prussia, which have quite different, specific legal statuses. And here, missing from the secondary literature are two crucial books on Royal Prussia. [1]

In any event, the book is valuable and offers much to think about. Pabst himself imagines three different reactions to his proposed typologizing: 1) that the previous typologies might be confirmed by another method, wherein other cities might be discovered that belong to one of those types; 2) alternately, or additionally, the discovery of new types, whose characteristics have gone unnoticed because of the great geographical dispersal; and 3), that any discovered communalities have no significance, because the profiles of individual cities are so different. Personally, I would be open to whatever is helpful in any of these three possibilities. But I am particularly sympathetic to the third choice (with the correctives of the others), and I will end with the piece of Rhineland carnival philosophy with which Pabst adroitly concludes all this striving for order: all cities may be comparable in some fashion, but 'jeder Jeck is' anders' ['Every jester's different'] (265).