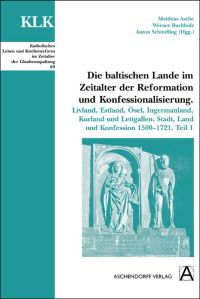 This unusually rich four-volume collection of essays on the subject of the Baltic Lands in the age of the Reformation and confessionalisation appears in the series Katholisches Leben und Kirchenreform im Zeitalter der Glaubensspaltung (Catholic Life and Church Reform in the Age of Schism, KLK) produced by the Freiburg "Gesellschaft zur Herausgabe des Corpus Catholicorum" (Society for the Edition of the Corpus Catholicorum). It stands as a welcome addition to similar collective volumes devoted to the Reformation and confessionalisation in the territories of the Holy Roman Empire (KLK 49-53, 56-57), Hungary (KLK 60), and Denmark, Norway, and Sweden (KLK 62). The authors of the series under discussion here are Estonian, Latvian, Swedish, Danish, and German early modern historians, as well as historians of languages, literatures, art, and architecture. The volumes are in part the result of three conferences held in Greifswald, one in Tallinn, and one in Riga over the years 2004-2008.

The term "Baltic" as it is used here excludes the Grand Duchy of Lithuania and avoids terms such as "Baltische Länder" and "Balticum", as these may be considered anachronistic and as concepts developed in nineteenth- and twentieth-century nationalism and nation-building projects; in the period under consideration, Lithuanian fates were tied up much more with the fate of the Rzeczpospolita utriusque gentis of Poland-Lithuania than they were with that of the largely German-, Latvian-, and Estonian-speaking inhabitants of and successors to the old Confederation of Livonia. The geographical focus here is on the lands from the Gulf of Finland in the north, the Baltic in the west, the northern Lithuanian border in the south, and Lake Peipus and the River Narva in the east - more or less the land of the modern Republics of Latvia and Estonia and, historically speaking, the lands of the Confederation of Livonia, which, upon its demise in 1561 and together with some neighbouring lands, became the object of Danish, Swedish, Polish-Lithuanian, and Russian competition for expansion into and hegemony over the region. The chronological limits are generally from the introduction of Lutheran reform ideas, which came early in the three major cities with their Low German speakers (Riga, 1521; Tallinn, 1523; Dorpat, 1524), to the end of Swedish rule over most of the area under discussion in 1710 (capitulation of Swedish Livonia to Russia in the Great Northern War) and 1721 (Treaty of Nystad). 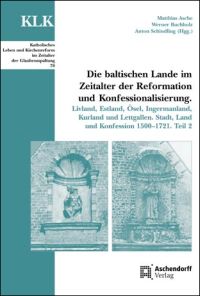 Although the volumes - indeed, even most of the articles - continue to use the terms "Reformation and confessionalisation" in their titles and elsewhere, in the "Prolegomena" to the collection, the editors note that this usage has been retained in part because of its presence in the preceding volumes in the KLK series to which the present volumes make reference. Even though the concept of confessionalisation may indeed be said to have been "fundamentally criticised, relativised, and have grown dull in multiple ways through an inflationary, unspecific use as an incisive scientific category" (Part 1, 29), it is still used here in order to bring out the complexity, ambiguity, and compound nature of the processes taking place in these lands over this period.

Full Lutheran confessionalisation occurred only with the consolidation of Swedish rule in large parts of the region beginning in the 1620s. These articles are particularly good at bringing out the differences of city versus countryside; or Low German speakers versus the Undeutsche (as speakers of Latvian and Estonian were then known); of areas where Russian speakers (and Russian armies) brought Orthodoxy into the picture in the north-east (Ingermanland); of areas in the south and south-west directly or indirectly under the rule of the Polish-Lithuanian Commonwealth (Inflanty or Polish Livland / Lettgallen and the Duchy of Courland and Semigalian, established as a secular state under the direct rule of the last Livonian Master in 1562 on the model of Ducal Prussia), where Catholicism and Catholics coexisted with Lutherans. In fact, we can speak of multiconfessionalism for much of the period before the 1620s (a full century after the Reformation first took hold in the area) as well as the notion of a certain "confessional no-man's land" (Part 1, 188), especially for the Estonian- and Latvian-speakers in the countryside, where nominal Lutheranism or Catholicism coexisted with lingering adherence to elements of a pre-Christian nature religion, above all when it came to rites of passage such as marriage and funerals. 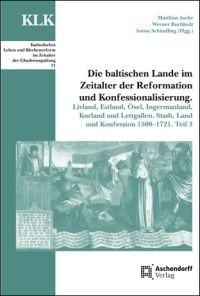 Two longer articles provide the foundation for the many more specialised articles, ranging from a page or two in length to twenty-some. The foundational articles are those of Aleksander Loit on the Reformation and confessionalisation in the countryside (Part 1, 49-215) and Enn Tarvel in the cities, above all Riga, Tallinn, and Dorpat, but also the lesser ones (Part 3, 17-99). In addition to Loit's almost book-length contribution, Part 1 contains articles devoted, among other things, to the role Reformation and Counter-Reformation played in the development of Latvian and Estonian literary languages and literatures (Raimo Raag, Pēteris Vanags). Part 2 is highly interdisciplinary and focuses on histories of art, architecture, language, music, and literature. Part 3 dwells in the cities and adds an article on German and Latin spiritual and humanistic literature in the period (Martin Klöker). Part 4 is largely art-historical, with especially welcome illustrations and analyses of the Livonian "Ruler-Iconography", a genealogical table of the Kettler ducal dynasty in Courland and Semigallia (1561-1737) and short essays on portraits and other physical artifacts pertaining to the dynasty (works above all by Markus Gerstmeier, Ojārs Spārātis, Jens E. Olesen, Wolf von Buchholtz, Julia Trinkert, and others). Julian Kreem and Valda Kļava provide fascinating overviews of how the Livonian Reformation was a problem for, and problematised in, modern Estonian and Latvian historiographical narratives.

Most of the articles are, at least in some part, sophisticated works of synthesis and presentations of the Stand der Forschung, and end with extensive bibliographies of secondary literature and some printed sources. That said, most articles also contain new views on old questions, and the series as a whole will come to be seen as simply revolutionary in the treatment of the topics as a complex. The volumes are richly illustrated with helpful commentary to such things as sculpture, paintings, architecture, old printed books, contemporary city panoramas and maps made for these volumes giving detailed pictures - indeed, the reader would be lost without them - of such things as the ecclesiastical jurisdictions before the Reformation, the lands of the Livonian Confederation in the XV and XVI century, the Baltic Lands after the Peace of Stolbovo (1617), the Baltic Lands from the Peace of Oliva (1660) to the time of the Great Northern War (1700) and the provinces of the Lutheran Church during Swedish rule, all of which introduce Part 1. Part 2 contains many illustrations of art, sculpture, and architecture. Part 3 offers detailed maps of the sixteenth-century cities. Part 4 is rich in illustrative material.

Although the authors have striven to avoid anachronistic nationally and confessionally based historiographic treatments of their topics, the secondary literatures of two of the major interested traditions - the Polish (and Polish and Lithuanian) and the Russian - are almost totally missing in the bibliographies. Most authors - Tarvel is a welcome exception - avoid all identification of sources and secondary literature in their narrations, so the reader is left trying to guess where to go next in his reading for specific issues. But this is merely a quibble. A short review cannot do justice to the richness and sophistication of what will become a required first stop on a tour of the multifaceted story of Reformation and confessionalisation in the Baltic Lands. I can only hope that the KLK will soon add the Grand Duchy of Lithuania to its agenda.