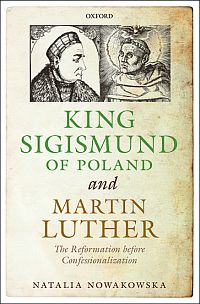 Natalia Nowakowska has written an excellent, ground-breaking book, couched in revisionistic terms. I enjoyed reading it immensely. It has given me much to ponderand, as I am slowly realizing, much of my own work has circled around but never gotten to the core (if there is one) of the peculiarities of Polish tolerance in the age of religious reforms.

The purportedly revisionistic argument is convincing and important: tolerance in the first stages of the Reformation in Poland, i.e., practically from the time of Martin Luther's break with the Roman Church to the death of King Sigismund I (1548) was something quite different from that which followed. It was "pre-confessionalized," which, as we will become convinced, meant quite a lot. That is to say, Sigismund (and others) were still living with late medieval notions of what constituted the catholic (with a small "c," i.e., universal) church. Membership in that church included "schismatics"-and Sigismund was better acquainted with those than most of his contemporaries, given the large numbers of Eastern-rite Christians who had long been living within his inherited realms - but excluded the few real heretics. This church was based on a "specific ecclesiology" (13), and the major part of Nowakowska's revisionism is to focus not only on realpolitik as the explanation for Sigismund's tolerance (as in the reigning Polish model), but also to try to get at "the underlying religious-cosmological assumptions" of Sigismund I and his elites (11). In this ecclesiology, membership in the church was defined by adherence to a unity based on "the historic consensus of the Christian people" (116-117). This consensus came about through councils and heated discussions and offered much room for questioning the boundaries of that consensus-Erasmus being only one of the last and most conspicuous of this sort of catholic. As Sigismund I would put it, "Permit me to be king of the sheep and the goats" (115-117); which was repeated by King Stefan Batory (reigned 1575-1586), who was living in a different, highly confessionalized Europe, including his own Commonwealth of the time. When this view is carried to its extreme (and revisionist works push things to extremes by their very nature), one gets the impression that in this early period only Luther and his immediate circles were "confessionalized," that the rest, for various reasons, were testing Lutheran ideas.

King Sigismund I issued several, seemingly draconian anti-Lutheran decrees (against spreading Lutheran ideas, against owning and reading Lutheran books, against sending sons to Lutheran universities, with Wittenberg at the top of the list), all of which his subjects seem to have consistently ignored or skirted around. Except for the famous case of Katarzyna Melchiorówna, who was burned at the stake in the Cracow Town Square in 1539 (and she had converted to Judaism-"a Christian was not a Jew", 168), Sigismund's only bloody reprisals (practically only punishments) were against the leaders of a famous social revolt from below. "The only Lutherans executed on royal orders, or actively hunted down, were the Danzig rebels after 1526" (131). In other words, ideas could be freely and publicly considered, so long as social peace and order remained intact.

The reader familiar with the situation in other parts of Europe, especially to the west, will constantly be saying to him- or herself: "but, but ... this sounds familiar." Nowakowska is remarkably well versed in the literature on other cultures of the time and does a wonderful job of putting the early Polish Reformation in its wider European context-throughout the book. She has thus set up a bit of a straw man in allowing some readers to think that this book is again about Polish exceptionalism in the model of Janusz Tazbir's now half-century-old, still pioneering, but increasingly problematic, Państwo bez stosów .[1] Thus, the rabbit she pulls out of the hat toward the end will come as no surprise to many experts in the Reformation in the West.

The author is absolutely correct, however, about certain aspects of her revisionism, specifically Polish historiography. This is the first comprehensive treatment of the "Lutheran Moment" (3) of the Polish Reformation since 1911. It was preceded by two "magisterial" (4), though confessionally and nationally biased monographs. [2] Further, for various reasons (including politics), the period has been largely neglected in the otherwise outstanding Polish body of Renaissance and Reformation studies. [3] To put it in stark terms, the early period, the one Nowakowska sees as a pre-confessionalized "Lutheran Moment" (3), has been treated as a sort of false start, with the real age of reforms beginning with the turn to Calvinism and all the flavors of Antitrinitarianism that flourished for a time beginning with the reign of the last Jagiellon, King Sigismund August II (reigned 1529 to 1572). This book fills a huge gap, does it excellently, and sets up the question of the differences in the nature of Polish tolerance in the pre-and post-confessionalization periods. Then, in the latter period, lines were much more strictly drawn, and there really was something to be tolerated (or not).

Now for the usual quibbles. This is precisely the sort of book my colleagues who work in the cultures and societies to the West are desperately awaiting - a more than welcome addition to the thin list of sophisticated studies in a language they can all read. The book might have been structured somewhat differently in a way that would help them without diminishing its important place within the specifically Polish discussion. First, why limit the book to the Polish Crown? This was a phenomenon that, to some extent, took in the entire Polish-Lithuanian Commonwealth, and the exclusion of the Grand Duchy should have been justified, or at least made clear. Second, Western and general Polish readers need to understand that this Poland is not today's Poland. Third, a much clearer discussion of the huge distinctions between the Two Prussias (Royal and Ducal), both with intimate but quite different relationships to the Polish-Lithuanian Commonwealth, and especially to its ruler, as well as the fraught but important relationships between the two, would have helped. This issue is dealt with piecemeal, assuming detailed knowledge on the part of the reader, and is not unproblematic in this treatment. More could have been said about Albrecht and his university and presses as centers for Lutheran learning and propaganda for "Poles," but also for Lithuanians and the Balts in general. My "Western" colleagues will welcome this book eagerly, but they could have benefitted from it more.

These issues aside - and they are important as quibbles go - this remains a truly path-breaking work. It is based on a command of a large primary and secondary printed and manuscript literature. It will be a must read for specialists in the history of the early modern Commonwealth, and, most welcome - I can't stress this enough-for important, serious scholars of the Reformation and the Counter-Reformation who lack the languages and training (how could they get it), but are plagued by a gnawing suspicion that something important was going on "over there," about which they hear only faint echoes (and here I think fondly of many conversations with my dear colleague Thomas A. Brady, Jr.).