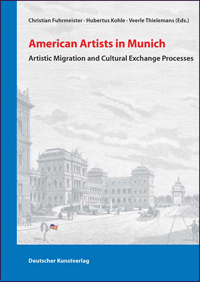 On the occasion of the bicentennial of the Munich Akademie der Bildenden Künste, the Academy joined forces with the Ludwig-Maximilians University, the Terra Foundation for American Art, and the Zentralinstitut für Kunstgeschichte in October 2007 to host an international conference "to examine the attraction that the self-proclaimed Kunststadt or 'City of the Art(s)' held for American artists between 1850 and the First World War." (7) The volume American Artists in Munich: Artistic Migration and Cultural Exchange Processes brings together the papers from that conference in a lively, wide-ranging, and varied collection. The cumulative scholarly ambition of the essays actually exceeds the narrow subject implied by the main title. In addition to treating both canonical and lesser-known American artists who trained, worked, or simply spent time in Munich, the essays also treat Munich-trained German artists and architects working in America. In this regard, the publication ably achieves one of its goals: constructing a "more open vision of American art." (9) At the same time, the book also successfully uses American artists as a lens with which to consider European art in general and the traditions, institutions, and training available in Munich in particular.

The book is composed of seventeen illustrated essays, plus an introduction and an appendix. The essays are thus quite brief, and too numerous to discuss individually here. More to the point, their publication has retained the enticing quality of conference presentations: focused and often dense with ideas that one would like to see developed in longer form. This also preserves the heterogeneity of the authors' methods, which include empirical documentary research, biographical readings, and contextual analysis. The volume reflects "an understanding of artistic cultures as hybrids rather than simply indigenous identities." (8) The balance of American and German scholars working in either Germany or the US also provides a disciplinary echo to the conceptual goal of the book to explore artistic culture as "a series of crossings back and forth rather than export." (9)

The book announces the completion of an important archival project of the academy: the publication online of its matriculation records from 1809 to 1920 (http://matrikel.adbk.de). This material is discussed by Suzanne Böller in her essay on "American Artists at the Academy of Fine Arts in Munich 1850-1920", in which she considers the presence of American artists in the context of the evolving academy and the schools of such professors as Carl von Piloty and the American Carl von Marr, who rose through the academy's hierarchies, and was even appointed director after WWI. Her discussion of the official channels through which American artists worked contrasts interestingly with, for instance, Katherine Manthorne's piece on "The Bavarian Beginnings of Eliza Greatorex". Eliza Greatorex, an Irish artist already established in the New York art scene, spent the period 1870-72 in Munich and Oberammergau. She worked independently, studying landscape and architecture, and produced a series of drawings entitled The Homes of Ober-Ammergau, which were reproduced in heliotype and published in 1872. Her stay, which was essentially extended tourism, had an immediate practical function in providing her material for publication. This contrasts sharply to the long-term institutionalization of a figure such as Carl von Marr. These are but two of the many biographically-oriented essays that demonstrate how ideas of "transfer, migration, and bi-national exchange" are useful concepts for bridging traditional methods of art historical inquiry with newer approaches to visual culture.

In this regard, the essays by Eric Rosenberg and Frank Mehring are exemplary. Eric Rosenberg's discussion of J. Frank Currier's images of the landscape around Schleissheim operates only nominally through the biographical fact of the artist having visited that locale. Instead, the author looks to ways in which Schleissheim was constructed in travel literature, and how the artist's work was received. This permits the essay to explore a compelling proposition about how the transitory landscape views of the immigrant artist "describe an aesthetic that is for all intents and purposes homeless." (106) Frank Mehring's essay on portraits by Winold Reiss likewise offers a reading that uses a nuanced analysis of the visual construction of race to circumvent the traditional narratives of modernism. The author moves beyond the biographical fact that Reiss worked closely with and made portraits of many intellectuals and artists of the "New Negro" movement. He considers Reiss's images in the context of contemporary ideas of cultural hybridity and pluralistic democracy. He connects the artist's visual vocabulary to "a democratic narrative that transcends racial discourses and demarcation lines", (208) which offers a fruitful way to read both the naturalism and the abstraction of Reiss's images.

Aside from the importance of Munich (or Munich-based training) to individual artists, many of the essays also demonstrate that Munich was not just a physical site with traditions and a collection of art institutions. It was a distinct context and an operative cultural concept. Helmut Hess provides a well-documented discussion of the photographic publishing industry in Munich in the late 19th century. He demonstrates that the opportunities in the city for training and exhibitions were significantly bolstered by the presence of photographic firms such as Hanfstaengl, which contracted artists to market photographic reproductions of their work. These firms thus made Munich's art available to a broad, international audience. Another essay that makes a compelling case for the special character of Munich is by Ursula Frohne, "'A kind of Teutonic Florence': Cultural and Professional Aspirations of American Artists in Munich." This essay discusses how a convergence of factors offered to American students "an attractive setting of cultural patronage, aesthetic display, and social decorum." (74) The choice of Munich over other European cities in the late 19th century - particularly Paris - was both artistically strategic and culturally significant. She emphasizes the contrast between "Paris Babylon" and "Munich the upright alternative", (74) and the close fit between high-quality technical instruction, work ethic, and the "bourgeois ideals of the democratic norm" (82) that characterized American notions of the successful artist-entrepreneur in this period.

Ursula Frohne's essay can serve as an emblem of one of the signal achievements of this book. Overall, the reader finds here a fully integrated picture of both the attractions of the city for American artists and the ways in which Munich's artistic culture was actively constructed by Americans and Münchner alike. This collection of essays provides a richly textured, alternative picture of artistic life and production in the late 19th and early 20th centuries, in which Munich appears as an important participant "in the emergence of multiple modernities." (11) Some of these modernities are shared with Paris, but it is refreshing that the French capital is glimpsed from a distance. The other important success of the book is the way in which it blurs the line between American and European art history as disciplinary categories. Through its attention to the space in between, this book demonstrates their interconnectedness, and maps new territory for understanding their interdependence.