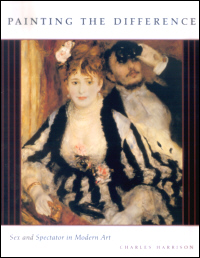 Charles Harrison's Painting the Difference: Sex and Spectator in Modern Art is a complex, idiosyncratic history of modern painting that attempts to reconcile traditional formalism with a quasi-feminist methodology. The author is direct in stating that he is "concerned with questions of relative aesthetic merit and of relative modernism in painting," and more importantly, that he hopes "to contribute something to thought about the grounds on which canonical status may have been, and perhaps ought to be, earned. To the extent that I am successful I would see my project as compatible with the feminist critique of patriarchy, if not always with the readings individual writers have given to specific paintings" (xii). The argument is far too dense to summarize here, but it involves an ambitious analysis of the relationship between the picture plane and the representation of sexual difference.

The narrative of the volume unfolds more or less as a traditional history of modern painting. The first chapter reads like one of the many possible ways for a modernist art historian to explain her or his way in twenty-five pages from the 16 th century to Renoir, with stops at Sophonisba Anguissola and Titian as well as Peter Paul Rubens and Elisabeth Vigée-Lebrun. At the same time, the author introduces the framework of feminist issues with which he concerns himself, principally, Laura Mulvey's "male gaze/female object" paradigm from "Visual Pleasure and Narrative Cinema" (1972), which, he asserts, "instantly became embedded at the heart of feminist studies in art history" (3). He raises the question of "how far and how often the modes of vision put at risk on such occasions might be identified with a specifically male gaze. Or, to put the point another way, how far a self-conscious exploration of sexual difference might be identified as a common feature among paintings whose distinctness is usually noticed on other grounds" (25). Gender is significant, he asserts, in a work as formally and visually complex as Rembrandt's Lucretia; it is not significant in a work as literal as Jan Steen's Life of Man.

The subsequent chapters refine the author's principle thesis that the representation of femininity, like the "self-critical" or "self-conscious" engagement with the picture plane, "played a crucial part in the development of a distinctively modern art" (36). Auguste Renoir, Édouard Manet, and Paul Cézanne are accorded a chapter each, and provide Charles Harrison with the opportunity to refine his notion of the operation of sexual difference by drawing a distinction between the "actual" spectator and the "imaginary" spectator constructed by the painting. Paul Cézanne was the painter who ultimately "understood or stumbled on the contradictory aesthetic obligation that modern art would from now on have to assume" (79). This painter's idiosyncratic navigation of images of femininity, particularly in such paintings as L'éternel féminin and his later female Bathers "do so in a manner pertinent to the experience of self-consciousness as a consciousness of sexual difference" (83).

Edgar Degas, who is accorded two chapters in the book, accomplishes the ultimate "self-othering" (and thus a particularly potent kind of modernism) in a monotype of a nude which the author claims "is a body seen from the virtual position of its own head. And what would it mean for the male spectator to occupy that position?" (125) This forms the basis for his analysis of Berthe Morisot and Mary Cassat in the following chapter, and invites questions about what it might mean for a male spectator "to imagine what it would be like to be a woman looking" at Mary Cassat's paintings, for instance. Though the early twentieth century saw "a break in painting's engagement with sexual difference" (154), Pablo Picasso and Henri Matisse (and less predictably, Pierre Bonnard), are reinscribed as the great heroes of Modernism because their painterly concerns seem to Charles Harrison to be inextricably linked to their reflections on and figurations of sexual difference. Unlike the first generation of abstract artists, "whose concern was to achieve a generalized - and highly theorized - spiritual or aesthetic effect transcending the contingencies of social life and of sexual and emotional relationship" (204), these painters return to the intense psychological space of the single figure and the emphatic painted surface. In doing so, they pave the way for Mark Rothko, whose mature works "seem critically indifferent to the authority of any specific subjective position, including such as might be defined in terms of sex or gender. ... In the surrender of the circumstanced and situational sense of self that Rothko's mature paintings invite, the 'male gaze' is surely an early casualty, if it is in any sense at issue" (230).

The argument broadens considerably in the final chapter, and addresses "a significant group of male homosexual artists," Jasper Johns, Robert Rauschenberg, and Andy Warhol. The author argues that their "shared opposition to ideological norms, ... common interests in the revision of precedents, and the modification of technique" (237) represent a paradoxical conjunction and diversion of modernist painting with the concerns of the readymade and the photograph. This is followed by a cursory discussion of Cindy Sherman and Barbara Kruger, who, though not painters, represent parallel transformations in an authoritative "subjective position." The author closes his survey of later twentieth-century art with a discussion of Index XVII (Now They Are), an opaquely glazed version of Gustave Courbet's L'origine du monde by the duo Art & Language. In the simultaneous provision for and denial of a kind of voyeurism (both literal and art-historical), this work is, for Charles Harrison, emblematic of the persistence of these issues well into what is generally considered the "postmodern" period.

The last section retraces the evolution of the author's argument. Initially, he had hoped to make "a kind of topical argument, one that would equate modernism with patriarchy and feminism with postmodernism, and that would associate both feminism and postmodernism with an end to the centrality of painting." Yet to do so would risk "simply mirroring the kind of reduction that is involved in assumptions about the hegemony of the male viewpoint. ... [and] to make the same kinds of conflation of actual viewers with imagined viewers, and thus to miss whatever element of critical reflection might have been insinuated into the hiatus between the two." This framework is predicated on a debatable distinction between paintings and photographs, which do "not have a picture plane in the manner that paintings may do, and ... neither make nor need to make any practical or conceptual distinction between actual and imagined viewers." In this sense, photography seems a priori disqualified from precisely the kind of critical discrimination of "the meritorious work of art," which was "not simply exceptional in strictly aesthetic terms, whatever they might be; it was exceptional in being modern, or modern in being exceptional" (256). Circularity of phrasing aside, this concern echoes not only the formalist criticism of the 1960s and '70s, but also the arguments made in the 1850s about why photography cannot be "art."

In the final paragraphs, the author makes a trenchant comparison between the "conventional wisdom" and rote litany of formalist concerns of the '70s and those rehearsed by students today about "the need to consider works of art within the wider context of contemporary visual culture ... The problem with the account is not so much that it is strictly untrue as that it has a sadly homogenizing effect on the study of art" (256). Closing with a categorical lament such as this ultimately weakens the complex and subtle arguments made in the volume. It obscures the author's conceptual reinterpretation of Modernist painting by drawing attention to (and in a sense apologizing for) what he has not done. The dichotomy between formalist art history and visual culture (or social art history, broadly understood) is itself a methodological cliché; the most effective way around it is to articulate one's critical goals and to argue them with whatever evidence the writer deems relevant. Arguably, Charles Harrison does this most effectively up through the chapter on Rothko. It would be easy to dispute his notion of sexual difference as essentializing and ahistorical; his visual analyses are nonetheless incisive. Read with the right willing suspension of disbelief, the volume offers a thought-provoking rescripting of an otherwise familiar narrative.