Michael Charlesworth: Landscape and Vision in Nineteenth-Century Britain and France 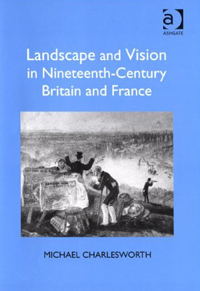 Michael Charlesworth's Landscape and Vision in Nineteenth-Century Britain and France is part social history, part formalist art history, part literary criticism, and part poetic reverie. The book claims to examine "the various visions (interpretations and imaginations) stimulated by" landscape, which can mean anything from actual gardens to Count Dracula's boxes of soil. Real or represented, "landscape" refers to something "more or less objective, based on nature or the physical world." "Vision" is also used in open terms: it is "largely subjective," whether scientific or imaginary (xiii). He claims that the "radical subjectivity" of these themes is "culturally determined" (xiv), but at the same time, "Works of art, literature, or entertainment possess an integrity of their own and an energy by which beholders and readers are shaped" (xv). This encapsulates the conflicted methodology of the book.

With seven chapters but no introduction or conclusion, the volume reads like a loosely strung group of essays. The first, "Panorama," seems to be a cultural history describing the origins of these entertainments in military drawing. He argues that their "optics" produced an effect of "transumption or 'far-fetching'. This is a rhetorical effect in which a remote cause, origin or phenomenon is evoked in the immediate present." (14) He goes on to connect their "effect of wonder" to Opium War-era panoramas of China and the colonialist enterprise. He then discusses "pertinent examples" of "the panoramic visual field" (24) in poems by William Wordsworth and paintings by Joseph Mallord William Turner and Caspar David Friedrich, in whose paintings, for instance, the "panoramic" creates a "sense of exaltation tempered by limitation, thus producing yearning." (26) Though the author emphasizes its sublime aesthetics, he ultimately asserts that the "panoramic," unlike the "panoptical," is about "objective knowledge." (29)

The second chapter, "Ghosts and visions," seeks to "test the question of whether ghosts are truly individualized and subjective or to what extent historico-cultural factors are involved in causing them to exist." (35) He discusses how literary representations of ruined abbeys (by definition landscape features) in Gothic literature, were understood as "spiritually potent" because they had not been deconsecrated following the Protestant Reformation. Similarly, on the basis of examples from Gothic literature and mechanistic scientific writing, we are "forced to consider" apparitions "as neither hallucinations [...] nor illusions [...] but as genuine devils." (43) He continues with a discussion of the Phantasmagoria and the contemporary scientific writing that sought to debunk it. This serves to introduce a discussion of Turner's late works: "forms do start to emerge from them that cannot be hastily perceived or satisfactorily photographed." (51) Borrowing from Brian Lukacher's readings of "shadowy spectral figures" in these paintings, Michael Charlesworth seems to claim that "historico-cultural" factors are conjuring actual apparitions, not just giving form to their literary or painted figuration.

The third chapter begins with a discussion of William Dyce's painting Pegwell Bay in the context of contemporary interest in geology. He uses the fact that the painter represents chalk cliffs to connect the painting to contemporary debates between scientific and Christian truths: "Chalk had been identified by Professor Ehrenberg as formed from the innumerable bodies of microscopic marine animals. Thus, [...] the chalk cliffs, and the fossils they contain, testified to death." (62) He then cites poems by Alfred Lord Tennyson and Matthew Arnold as further demonstration of the ideas he claims to be at work in the painting. Of the two landscape gardens he discusses, only Biddulph Grange, with its biblically-inspired geological museum, continues this theme. The chapter closes with a comparison between Pegwell Bay and Claude Monet's Etretat, Sunset. William Dyce's work is "highly finished and therefore not modernist in its handling (modernism being for our purposes definable in terms of formal experimentation by the artist in search of more appropriate ways of conveying the feeling of being alive - more appropriate than traditional ways, that is)," yet "we can certainly decide that Dyce's painting is a painting of modernity, if that word is defined as denoting the psychic impact of processes of modernization." (79) This convoluted definition of these terms only amplifies the overstated stylistic comparison between the two paintings, as if the historical context of Monet's work was somehow unimportant.

Chapter four treats the garden at Ermenonville, where Jean-Jacques Rousseau spent the last two months of his life. As previously, an overstated comparison functions as a transition - from Jean-Jacques Rousseau's pastoral final days to Charles Baudelaire's dystopic urban nightmare in his poem "Les sept viellards." William Wordsworth's "Resolution and Independence" forms the third main topic of this chapter. The author asserts "considerable continuities of thought and imagination between these three figures," and concludes that "the energies of English Romanticism poured through Charles Baudelaire's imagination" (92). The argument shifts from a consideration of "landscape" and "vision" to a demonstration of "how modernism differs from Romanticism, by comparing Charles Baudelaire's poetry with historical precedents involving cross-Channel exchange of poetic insights." (107) In the next chapter, the author introduces the notion of "the loss of Venus, which does not seem like a theme in landscape at all until we consider, as is necessary and inevitable, the birthplace of Venus" (107). A discussion of representations of the island of Cythera leads to a hackneyed comparison of Édouard Manet with "conservative academic artists" who "were still asserting that Venus was still present." (123) Manet "acknowledged the loss of Venus," (125) and thus begins modern painting. Landscape has disappeared from the argument.

The sixth chapter discusses early written and painted accounts of Tahiti, "the new Cythera," but then glosses over the "depressing reading" that is the history of the island up to 1890 in order to get to Paul Gauguin. Charles Baudelaire appears as the source of Paul Gauguin's awareness "of the possible disappointment of his belief, or his wish to believe." (140) The Tahitian work is marked by "substitution and reversal," which "can help us to clarify certain elements in them and apparent inconsistencies in Gauguin's life and work that scholars have worried over." (142) The author offers interpretations that exceed biography, however: Nevermore, for instance, "surely signifies by its difference from Titian's [Venus of Urbino] [...] that never more can Tahiti be taken as the 'Isle of Venus'." (143) A similar tenuous logic informs the interpretation of Contes Barbares: "Gauguin the activist may suggest that the way ahead for Pacific islands, away from the damage already caused by Euro-Western influence" (149) is Buddhism, because Paul Gauguin seems to have borrowed part of a pose from a Buddhist sculpture.

The book's persistent, intractable problems of methodology and logical argumentation are most pronounced in the last chapter, awkwardly titled "Monet re-states and Mallarmé suggests the subject matter." The chapter opens with an apology for what the book has not addressed: "this book is not about the lines of descent of landscape painting; it is about visual culture, which means that, taking a holistic view, it embraces poetry and prose, landscape gardens, popular entertainments, [...] as well as painting and drawing." (155) "Visual culture" in current scholarship does indeed address multiple practices, but it also seeks to historicize in a uniform way. In this book, things like panoramas or Tahitian exploration require (often painfully detailed) historical contextualization; "high art," such as painting and poetry, does not. The discussion of Claude Monet's Poplars series, for example, niggles over the species of trees, but ultimately only concludes that Monet "re-states the object, over and over again, showing us that it is, in fact, never quite the same object. The re-statements become statements of the appearance of the object as well as the object itself." (168) The author seems to believe that his visual analysis of the paintings prove this point; in the absence of any contextual or historical evidence, this remains only an assertion, not an argument.

The debate the author describes in the third chapter between geological science and Christian religion is an apt metaphor for this book, but in an unexpected way. The author relies heavily on conventional notions of 19th century artistic and literary movements, which he deploys like an early geologist describing rock strata. At the same time, the book operates with a blind faith that minutiae make for historical context, and that, relevant or not, it can transform aesthetic appreciation into plausible visual analysis.