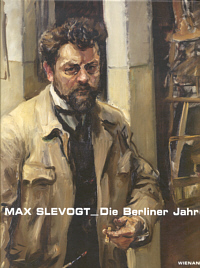 The exhibition and catalog Max Slevogt: Die Berliner Jahre represents the third part of the ambitious program of the Von der Heydt-Museum to showcase masterpieces of their collections through exhibitions on the "Dreigestirns des deutschen Impressionismus," Lovis Corinth (in 1999), Max Liebermann (in 2004), and Max Slevogt. The handsomely designed catalogue is richly illustrated, with large, full-color illustrations of the eighty exhibited works accompanied by descriptive catalog entries. The catalogue is organized more or less by genre: a general survey of Slevogt's Berlin years is followed by a section on self-portraits and family portraits, a section on landscapes, and a section on theater-pieces. Each of these sections is preceded by a substantial essay; the editor also chose to include an essay on Slevogt's graphic work from this period, but evidently none of these works were shown in the exhibition. A concise but complete year-by-year biography closes the text of the catalog.

Slevogt's move from Munich to Berlin in 1899 came at a decisive moment in his career. Trained in Munich, he had been operating as a "freischaffender Künstler" there since 1891. The "wachsendem Unverständnis" he encountered in the conservative art scene there became concrete in 1899 when his Danaë (1895) was withdrawn from the Munich Secession exhibition in June of that year (9). Tellingly, his triptych The Prodigal Son (1898-99, cat. no. 3) was exhibited to great acclaim at the Berlin Secession exhibition that had opened in May. Shortly thereafter, the Berlin dealer Paul Cassirer offered Slevogt a contract guaranteeing him 4000 Mark per year in sales for three or four years (10). After a brief stay in Frankfurt, Slevogt moved to Berlin. His years there were marked by commissions in Hamburg and Munich, and after 1909 were punctuated by summers at a family villa in Godramstein, in the Pfalz. In 1914, he undertook a five-week trip to Egypt, which effectively marked the end of his time in Berlin. At the outbreak of the war, he went to the front as an artist-reporter, but returned dejected after only a few weeks. During the war he divided his time between Berlin and another family villa in Neukastel in the Pfalz. At the end of the war he was isolated in Neukastel.

The lead essay by Nicole Hartje very effectively introduces the central theme of the exhibition and the catalog. With the move to Berlin, Slevogt "trat [...] aus dem Schatten der traditionell geprägten Münchner Malerei [...] heraus" (9) and "ließ die Kunst des 19. Jahrhunderts hinter sich und wurde zu einem Maler am Beginn der Moderne" (27). She places Slevogt in the context of the Berlin Secession, and seeks to show how his work was influenced by the modern painting embraced by this group. Though the list is familiar, the "Auseinandersetzung" with Manet and French Impressionism dominates her discussion, particularly in regard to Slevogt's many portraits of the period. She also discusses Slevogt's many commissions of this period, from a set of decorative panels for Johannes Guthmann to a fascinating set of portraits of Prinzregent Leopold of Bavaria. Impressionism more generally defined is the central theme in the essay by Berthold Roland, which also describes the history and significance of Slevogt's family properties in Godramstein and later Neukastel. The arguments of both authors are made principally through visual analysis, and their discussions of the works in the catalog are very sensitive to the wide range of painterly means Slevogt employed in this dynamic phase of his career.

Like Berthold Roland's essay on the landscapes, the other essays in the volume concentrate on specific genres. Sabine Fehlemann's essay discusses a group of Slevogt's self-portraits, of which he produced more than forty over the course of his career. This essay raises a number of interesting questions about the relationship between Slevogt's appearance (in photographs, of which there are also many reproduced in the catalog), his sense of his own corporeality, his public persona, and his identity as a painter. Her discussion demonstrates vividly that the Berlin years saw the production of many major self-portraits, and her discussion of their psychology might have benefited from more of her insightful stylistic analysis in order to give the reader a more complete sense of how Slevogt's sense of self in this particular period made itself visible.

Sabine Fehlemann's discussion of the self-portraits finds a complement in Carola Schenk's essay on Slevogt and the theater, the subject of her forthcoming dissertation. In addition to connecting Slevogt's activity in Berlin to the worlds of theater, dance, and music, this essay concentrates on the genre of the "Rollenporträt," specifically the two major portraits of the Portuguese tenor Francisco d'Andrade included in the exhibition (cat. nos. 72 and 75). Her discussion of the relationship between the concern with likeness and identity, the preservation of the performative moment, and Slevogt's rapidly evolving style reveals the complexity of this aspect of his work. Carola Schenk's essay also gestures clearly to the fact that, seen in the context of contemporary theater, Slevogt's modernism was indeed more than just stylistic. Similar ideas emerge in Bernhard Geil's essay on Slevogt's graphic work, which surveys the artist's production of both illustrations and editioned original prints. This author emphasizes media and style; his inclusion of information on Bruno Cassirer's publishing ventures offers a tantalizing glimpse of Slevogt's place in modernist Berlin's art institutions.

The volume offers a broad and thorough examination of what was arguably the most complex period of Slevogt's career. As an exhibition catalog, it can only approximate the actual point of the undertaking: the sensory experience of Slevogt's paintings. As reproduced in the catalog, the exhibition was surely both instructive and aesthetically gratifying. From the dark, quasi-realist, quasi-expressionist Prodigal Son to the odd, luscious Paradiesvögel (1900, cat. no. 4), and from the Andrade costume-pieces to the large landscapes, this selection of pictures demonstrates both his range and his achievement of a distinctive painterly idiom. The essays in the catalog bring this visual richness to life intelligently and vividly, and they do so through a variety of approaches. The emphasis on style may occasionally privilege Manet and French Impressionism, but the volume also offers ample opportunity to consider the ways that like them, Slevogt in Berlin was also very much de son temps.