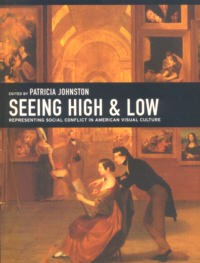 Seeing High and Low: Representing Social Conflict in American Visual Culture is a collection of fifteen essays covering material from the colonial period to the end of the 20th century. Arranged chronologically, the individual essays seek to address "central issues in American history and their expression in a variety of visual practices" (2). As editor Patricia Johnston writes in the introduction, one of the explicit goals of the collection is to bridge current interpretive concerns of the disciplines of art history and American studies via visual culture (or, as she also calls the undertaking, visual cultural studies). The collection stakes out a broad but fairly well-defined methodological zone, bordered by social art history on one side and cultural studies on the other. The framework for this set of case studies consists of two conceptual axes: the notion of "high and low" culture and the representation of "social conflict". The editor promises "not a synthetic history of the high and the low but a thematic and episodic account" (5). This axis is the true backbone of the volume, since all of the essays engage in some form with notions of high and low, be it art or culture more generally understood. The second axis, "social conflict", is less well developed, and refers in some cases to specific historical events (like the Civil War) or in others to generic social issues such as racism.

Many of the essays operate through insightful and careful social contextualization. Patricia Johnston's own contribution on Samuel F. B. Morse's Gallery of the Louvre examines that painter's monumental canvas in the context of popular anti-Catholic sentiment in America in the first half of the 19th century. She suggests that the painting reflects a profound ambivalence on the part of the artist vis-à-vis the religious content of the models of Renaissance and Baroque painting he prized for their artistic value. Melissa Dabakis' essay, in a parallel vein, looks at the work of two female sculptors, Anne Whitney and Edmonia Lewis, in the context of contemporary discourses on race, physiognomy, and abolition. She sets the demand for "realistic African features" against the neoclassical tradition, and argues that these artists (one white, the other African-American) created a new "visual vocabulary that undermined racial hierarchies" (99) for the representation of freed black women. Jeffrey Belknap's analysis of murals by Diego Rivera and Miguel Covarrubias in the context of the rise of "gringo" tourism in Mexico in the early 20th century is a particularly effective example of this kind of contextualization. He argues that this form of cross-border economic activity provided these muralists with the opportunity to re-engage with traditions of caricature as well as to explore new structures for representing the spectacle of spectating.

A handful of the essays in this collection interrogate notions of high and low through methods less familiar than discussion of works in social or historical context. Patricia M. Burnham, for instance, presents a synchronic discussion of an array of representations of the Battle of the Little Bighorn - known to the victorious Plains tribes as the Battle of Greasy Grass. She juxtaposes canonical white interpretations of this historical event with representations by Native American artists. She includes low culture material like a mass-circulation lithograph distributed by the Anheuser-Busch Brewing Company as a promotional image for barrooms and high art like Bentley Spang's War Shirt #1 (1998), and argues that the battle "is still contested ground" (139). Katharine Martinez investigates a peculiar and important zone between high and low art through her insightful analysis of the burgeoning market for photomechanical reproductions between 1880 and 1920. She argues that the commercial picture market created a new "visual landscape" that was ultimately incompatible with traditional notions of good taste and an educated eye. These two essays are particularly adept at navigating the concepts of high and low by attending not only to representations, but to the ways that they were made to function by both producers and consumers.

Other essays explore the axis of high and low through the lens of institutional operations. Regina Lee Blaszczyk offers a fascinating case study of Georgia O'Keeffe's short-lived relationship with the Cheney Brothers Silk Manufacturing Company in 1926. O'Keeffe painted five flower paintings in that season's palette for exhibition and use in the company's advertising campaign. The essay discusses the role of color in fashion merchandising, and explores parallels between the Cheney Brothers' corporate strategies and those employed by Alfred Stieglitz acting as agent for his coterie of modernist artists, including O'Keeffe. Alan Wallach's essay on the Norman Rockwell Museum in Stockbridge, Massachusetts (which opened its new building in 1993) likewise explores how the institutionalization of Rockwell's mass-market work involves a game of ideological hide-and-seek. He considers ways that the museum enshrines both paintings and popular illustrations in a fantasy spectacle of New England Town Hall architecture, and how Rockwell's vision, redolent of the racial and class biases of his historical period, is re-presented as timeless and universal high art. These two essays offer insightful critiques of traditional narratives and institutions, respectively, and demonstrate effectively how the methods of visual culture can help the discipline of art history learn about itself.

As Patricial Johnston states in the introduction, "the essays argue implicitly that all visual production and experiences can be read as social as well as aesthetic documents" (2). Her selection of essays articulates this position well, and this book would make an excellent reader for an undergraduate survey of American art. The editor's careful introduction provides not only clear and helpful definitions, but it also contains a concise, informed, and lucid discussion of the state of the disciplines of art history and American studies. As a collection, it enacts this interdisciplinary ambition effectively, and it contains both comparatively traditional social art history as well as cutting-edge visual culture studies. The chronological reach is broad, and the essays do an admirable job of covering both canonical and non-canonical material. The best of them combine methodological sophistication with interesting original research. It is a good demonstration of how vibrant and fertile the enterprise of visual culture is at this time.