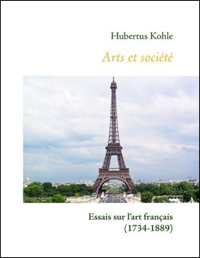 It is always good news to have at your disposal volumes compiling articles otherwise scattered in books or specialized journals, in exhibition catalogues or conference proceedings, which are not always easy to find. Therefore, the publication of the collection of texts by Hubertus Kohle gathered under the title Arts et société. Essais sur l'art français (1734-1889) is definitely welcome. It must be so for the audience to which it is immediately addressed, the French-speaking scholarly community; but this is also the case for the wider readership of international researchers and advanced students investigating French modern art. With this publication, almost all articles by Kohle that deal with French topics will be available either in English or French. By the same token, it will help to counterbalance the hypertrophic presence of Anglo-Saxon scholarship on French art . This alone makes this publication helpful; its inherent interest goes however well beyond the mere criterion of usefulness as the following pages will show.

The nine essays included in the present volume were originally published in German between 1991 and 2004, thirteen years in Kohle's highly productive career. Some first appeared in art-historical publications and some others in the series edited by Kohle himself, together with Gudrun Gersmann, devoted to the "afterlife" of the Grande Révolution and its reverberation in French society all through the long 19th century.

The volume studies several topics of French art production in the hundred and fifty years stretching from the mid-18th century to the late 19th. Following a strict chronological order, the opening article focuses on Hyacinthe Rigaud's portrait of Gaspar de Gueidan thus raising the issue of the appropriation of the codes of aristocratic portraiture under the Ancien Régime and of its social implications, while the last is devoted to the reception of the Tour Eiffel, at the time of the 1889 Universal Exposition, as an emblem of the progressive and equalitarian ideology promoted by the Third Republic.

The articles have a discursive structure of great rationality, written as they are in a style that is both precise and intelligible. And this is one of the strengths of the volume. The essays result from a thorough and (at the time of their publication) updated research of each of the topics. Consequently, the discussion as much as the conclusions reached by Kohle are convincing and insightful. One point could be made at this stage: Penetrating analyses and daring interpretation are not at odds with conceptual clarity. This is particularly evident in the excellent article of 1991 "Spontanéité et reconstruction. Du rôle, de l'organisation et des compétences de la critique d'art par rapport à la théorie de l'art et à l'histoire de l'art", written together with the late Stefan Germer, which is the theoretically most dense of all the texts in the volume.

Also, in all nine articles, the peril of over-interpretation or any sort of methodological partisanship is successfully kept afar. This is not to say that Hubertus Kohle's approach is eclectic in character. Iconology, formal analysis, or sociology, among others, are indeed present in most of his texts. But Kohle proceeds as an art historian, a historian free from positivist penchants towards sheer fact accumulation unaccompanied by interpretation. Kohle does indeed offer his reader interpretations much in tune with cultural history and social art history, though not of Marxist lineage.

As the title itself of the volume states, the interactions between art and society are at the very heart of the essays as much as the new role played by art production in French modern society. Kohle inscribes the artists and their production in a larger historical framework, in an unstable web shaped by changing social and political conditions. Kohle explores the shifting meanings that particular figures or works do have at particular times. For example, such a standpoint becomes obvious in articles such as those devoted to the sentimentalized depictions in the genre historique of episodes from the revolutionary period produced for the Salons of the Second Republic and the Second Empire; and in those focused on the figure of Jacques-Louis David - significantly the most ubiquitous presence in this volume - in the years of his exile in Brussels under the Restoration.

The French art of the late 18th and the 19th centuries has always been one of the most extensively studied fields and the last decades in particular have witnessed a blossoming of new publications and the opening of new approaches. This brings to the fore the question of the opportunity of a volume compiling texts that are, in some cases, almost twenty years old.

In the 1990s, Hubertus Kohle was innovative when exploring certain aspects of French modern art, disregarded by the then current art historical research. Indeed, neither much was produced on David's late work nor much attention was paid to his scarce religious painting. Also the period of the Restoration in general was in need of an analysis that went beyond researching its major figures and events such as the emergence of an école romantique in the early 1820s. The study of art criticism was much of a barren field, when it came to be approached not as a literary genre but as an essential mechanism in the constitution of the public life of works of art and therefore in the fabrication of their meaning. Such neglected topics are central in many of Kohle's essays in this volume: Above all, the conceptual delimitation of art critical writing, and the analysis of the political tensions underlying the reception of art production in post-revolutionary and post-Napoleonic France.

Especially in those instances, the articles by Kohle are still valid. His 1993 essay on Auguste Jal, "La critique d'art comme tribune des idéaux révolutionnaires. L'exemple d'Auguste Jal," deserves to be noted here. If compared to that of other moments in the 19th century, notably its second half, the art criticism of the Restoration begins to be addressed in art historical research in recent years only. To this day, Kohle's article on Jal ranks among the best and the few devoted to this fascinating author, who remains obscure and undervalued. Kohle raises the complex issue of the relationship of art criticism and ideology in the period of the Restoration (also explicitly addressed in the 1991 article on "La mort de Jacques-Louis David") and the contribution of liberal critics such as Jal and Stendhal to the formation of the idea of modernity.

As for any other work, some aspects of this publication could be criticized. First of all, a real introduction to the volume is missing. As already mentioned, much has recently been written on French modern art and art criticism. This very fact makes almost mandatory the discussion by the author of his own work from the detached perspective given by time and experience. That would amount to a sort of analysis of both his previous production and his later parcours, at the light of the methodological and interpretative tools introduced in the writing of art history in the last two decades.

Furthermore, one senses a lack of care in the edition. The translation sounds awkward at certain moments and the resulting text in French suffers from a significant number of grammatical errors. A more in depth proof-reading and editorial work could have avoided such stylistic weaknesses. Finally, there is no bibliography listing the literature cited in the footnotes when this would have been helpful for the readers of the book. All this as well as the uneven quality of the reproductions are but minor criticisms. The inherent quality of the texts, the interest of the issues they address, and the validity today of the discussions they raised justify the necessity of this publication.