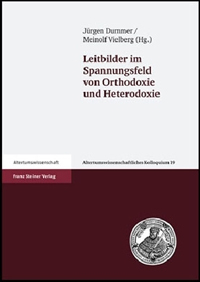 This is a collection of six essays, each investigating the exemplary role of a figure who represents one side of a controversy within the church or between the church and the ambient society. Hans Christof Brennecke's article on Marcion is subtitled "das philosophische Gottesbild in der Spannung zwischen Orthodxie und Heterodoxie". He begins by pointing out that the Greeks who populated the churches outside Palestine could not be expected to cherish the cultic practices of Israel or accept as Father a God whose attributes contradicted the postulates of philosophy. We may demur to this, since it assumes that the majority of converts took their notions of the divine from the philosophers; Brennecke is certainly right, however, when he argues that the rejection of the Old Testament in the early church was prompted not by any particular animus against Jews but by a sense of its obsolescence. Marcion was not prepared to join catholics in applying the balm of allegory; on the other hand, his own thought may have suffered from pedantry in interpretation, since, as Brennecke deftly observes, we cannot be certain whether he meant to divide the world between two gods or to personify different attributes of the same deity (23). Not so shrewd is his credulous attempt to tease social history from ancient reports of Marcion's attempts to bribe the church.

Ernst Dassmann's study, "Ambrosius von Mailand", can be summarised in his own epigram that the bishop extended his tolerance to the erring but denied it to the error (45). As a protagonist of the one faith in a realm of mixed religions, he was forced to accept diversity of practice, though his occupation of a contested church in defiance of the imperial soldiery lends itself to a brisk and arresting narrative. The harshness of his policy towards the Jews and their royal protector cannot be denied, though it is tempered, in Dassmann's view, by a charitable eschatology. For all the ingenuity of his machinations, Ambrose is characterized at last as one who promoted a search for answers that he did not possess (46). It might be wished that Dassmann himself had investigated the theological questions of the day, and the manoeuvres that Ambrose adopted in response to them with the rigour and subtlety of Neil McLynn's recent Ambrose of Milan, which does not figure in the bibliography to this article.

Michael Durst's "Hilarius von Poitiers" considers its subject, not as a theologian, but as an "'orthodoxes Leitbild' der Spätantike". A saint in the eyes of all subsequent ages, Hilary is, by his own profession, a bishop of the catholic faith, a soldier of truth and a prisoner of conscience; not content to praise him, with Rufinus, as a protagonist of orthodoxy, Jerome commends his eloquence, and Paulinus of Périgueux styles him the champion and soul of faith. Cassiodorus (amanuensis to an Arian monarch) prefers to dwell on his sagacity as an exegete, but in other circles he is one of the most authoritative doctors of the Church, receiving from Victor of Lérins the technical appellation magister probabilis. This itinerary of fame reminds us that it is not his own pen that makes a man a Father of the Church; it does nothing to bring out any peculiarity in the career or reputation of Hilary, for nothing is said of him. Neither by himself or by his admirers, which was not said of Augustine, Athanansius and even Origen.

Günther Christian Hansen's essay, "Herakles am Scheideweg: Der Kyniker als Leitbild in der Spätantike" does not in fact confine its reconnaissance to late antiquity. After a brief synopsis of the parable, ascribed by Xenophon to the sophist Prodicus, in which Heracles makes a choice between the blandishments of vice and the solemn overtures of virtue, he traces the metamorphoses of the conceit in German culture. Returning to the fable, he notes that Philo of Alexandria substitutes pleasure for vice in a variant that he seems inclined to derive from a common source in Antisthenes rather than from Xenophon. He alludes briefly to another version in Themistius and to the "monstrous" elaboration of the theme in the Tablet of Cebes (114), which, as he remarks, has blended the choice of Heracles with the image of the two paths, widely attested in antiquity and familiar to every reader of the Gospels. Robert Aldridge's "Peter and the Two Ways" (Vigiliae Christianae 1997) would have been a useful addition to the footnotes, but it is difficult to see how even an amplified version of this learned piece could be reconciled with the title of the volume.

In "Ephräm versus Bardaisan", Thomas Kremer differs from Hans Drijvers, who maintained that the dualistic theology of this Syrian polymath was derived primarily from Greek antecedents. To Kremer, the depiction of God as light, the reification of darkness in the primordial abyss and the delegation of divine providence to celestial luminaries all bespeak an acquaintance with the renascent Zoroastrianism of this epoch. At the same time, he observes that Ephraem Syrus, in his satires on Bardaisan, exaggerates those features of his thought which are least compatible with orthodox Christianity. The question is an intricate one, since Mani's system is also traced to Persian sources in Christian polemic, though it now appears that he took his first lessons in dualism from the Elchasaites. Studies of Mithraism have concluded that the cult would not have spread to the west had it not been fashioned anew by a chain of intermediaries, and we cannot tell what turbid and devious channels might have carried Persian lore to Edessa in the closing years of the second century.

The difficulty if ascertaining what is primitive in any creed is illustrated in the concluding article by Judith Lieu, "Gedächtnis and Identität: die frühchristliche Entdeckung einer Vergangenheit". Noting that the construction of the past in late antiquity has become a fashionable pursuit of scholarship at a time when many nations are writing pedigrees for themselves, she shows that ancient texts on the provenance of Christianity are informed by the same desire for legitimation. Melito undertakes to prove that good emperors have never been persecutors, and that Christ was born at a time uniquely propitious to the diffusion of his Gospel. Against the Jews, who were busy with the refashioning of their own history, Justin Martyr urges that the Christian brotherhood, and not the biological line of Israel is the true brotherhood. Competition for primacy within the church engendered works like the Clementine Recognitions, which traces its curious teachings to an age before Paul disturbed the unanimity of the Church. Not in themselves original, these observations are newly combined to form a compact and learned survey.

This is a collection of erudite pieces, some of which amass information not easily found elsewhere within the covers of one book, let alone within the dimensions of a single article. There appears to be no common programme, no concerted investigation of the "limits of biography" or the methods and purposes of heresiology, no attempt to produce a seamless examination of a particular tendency or epoch, such as might now be demanded from a symposium in the English-speaking world. Perhaps this is not to be regretted: if one employs six hands to make a volume, there is something to be said for allowing each to freely what it does best, without editorial goading or restraint.