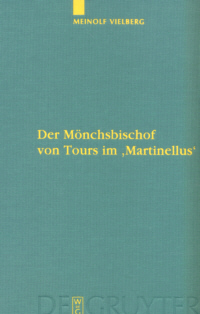 Martin of Tours was a former Roman soldier, an outsider from the Balkans, and a disheveled monk. When he was unexpectedly selected to become bishop of Tours, the other bishops who presided at his consecration were repulsed. In contrast, the subsequent cult of St. Martin was probably the most popular and influential in late Roman and early Merovingian Gaul. For modern medieval historians the cult of St. Martin is equally popular, simply because it is so well documented, in particular during the early centuries. Sulpicius Severus composed a laudatory biography already during Martin's lifetime and later supplemented it with accounts of his funeral and posthumous reputation. During the 460s bishop Perpetuus of Tours compiled a (now lost) collection of stories about the miracles that were happening at St. Martin's shrines. At the same time the poet Paulinus of Périgueux versified Sulpicius' writings and Perpetuus' anthology as a long epic poem. In the later sixth century another bishop of Tours and another poet updated the saint's cult. Gregory of Tours again summarized Perpetuus' catalogue and then added over two hundred more miracle stories. His friend Fortunatus composed another long epic poem by again versifying Sulpicius' writings. In the evaluation of a later medieval author, Sulpicius, Paulinus, Gregory, and Fortunatus had been the "four evangelists" whose writings could be thought of as the gospels that had shaped the early cult of St. Martin.

Meinolf Vielberg's book is an excellent study of what he calls a "Martinellus", a dossier of texts about the early cult of St. Martin. The Martinellus is usually taken to refer to the specific family of medieval manuscripts of Sulpicius' writings that had included as appendixes other texts relevant to the cult of St. Martin, such as passages excerpted from later authors. Vielberg has now extended the meaning of Martinellus to refer to this entire sequence of extensive texts about St. Martin from the fourth, fifth, and sixth centuries. His interest in these texts is primarily literary, and in the introductory chapter he stresses the notions of reception and intertextuality. Sulpicius' writings, in particular his Life of Martin, were the original sources for subsequent authors such as Paulinus and Fortunatus. In Vielberg's characterization, there was one prose "Prätext" but several "Folgetexte" or "Epitexte" in verse (28). His discussions hence highlight the modifications, whether additions or omissions, in the citations and references from one text to the next.

In Chapter 2 Vielberg surveys the four authors and their works. Sulpicius' writings were themselves a mini-Martinellus, since each offered a new modification of the image of Martin. His Life had not included the saint's death; so the letter in which he noted Martin's death was already a second edition of Life. In his Dialogues, yet another collection of anecdotes about his hero, Sulpicius extended even further this "metamorphosis of the image of Martin" (59). In his discussion of Paulinus, Vielberg is most concerned to clarify the poet's relationship with bishop Perpetuus, a patron who might properly be viewed as an "episcopal Maecenas" (74). For Fortunatus' poems Vielberg emphasizes the importance of the motif of journeys. Fortunatus himself had migrated to Gaul from Italy, perhaps as a pilgrim wanting to pay his respects to the shrine of St. Martin. This notion of traveling subsequently became an important theme in Fortunatus' epic of Martin's career, "the unifying principle of Martin's life" (107). Gregory of Tours found in St. Martin a suitable idiom for writing history and for articulating his own identity. Even though the narrative in his Histories focused on royal politics, Gregory nevertheless included many stories about the appearances of St. Martin. In his huge collection of stories about St. Martin's contemporary miracles he likewise included stories about himself. Just as St. Martin framed the political narrative in Histories by appearing in both the introduction and the conclusion, so Gregory's own experiences were the bookends for the miracle stories about St. Martin.

In Chapter 3 Vielberg focuses primarily on the long poems of Paulinus and Fortunatus. One study contrasts Martin as a monk and bishop with the St. Martin who performed miracles. While Martin had been primarily a patron for the weak and powerless, St. Martin eventually became a patron for the powerful and wealthy who came to his shrine as pilgrims (177). A second study examines the language of color in later accounts of St. Martin. A third study investigates the use of personifications, primarily in the verse epic of Paulinus, who liked to stress the nearness and the presence of St. Martin. A final study examines the use of rhetoric in the hagiography about St. Martin, in particular in the poems of Paulinus and Fortunatus but also in the writings of later medieval authors such as Alcuin.

Vielberg's intense focus on literary analyses has its drawbacks, however. One is a reluctance to provide specific historical contexts. As Roman administration receded from northern and central Gaul during the fifth century, Paulinus insisted that St. Martin was more powerful than an emperor and his magistrates. As the descendants of old aristocratic families came to dominate episcopal sees in Gaul during the sixth century, Fortunatus claimed that St. Martin had become a "senator" in heaven. Both Paulinus and Fortunatus used images of the saint as a symbolic language for understanding their own contemporary circumstances. A second weakness is a failure to follow up on hints about literary theory. Vielberg raises the possibility of reading this dossier of successive texts about St. Martin in terms of "Intertextualitatstheorie" (28; cf. 290). Intertextuality is a way for modern scholars to think about ancient texts by stressing how both ancient authors through their writing and ancient readers through their reading (or listening) had interacted with earlier texts. Intertextuality presupposes a highly developed, self-conscious awareness of such allusions among both authors and readers. Every ancient text was an interpretation of earlier texts. In contrast, Vielberg tends simply to catalogue the similarities and the differences among the texts over the centuries. This sort of close reading can be illuminating, but it often says more about Vielberg's own learning and ingenuity than about the ancient authors and readers.

The obvious strength of Vielberg's analysis is his willingness to consider all four important authors together in the context of evaluating the reception of St. Martin. Each author constructed his own version of St. Martin. Sulpicius may have listened and watched Martin himself, and subsequent authors may have claimed to be simply repeating Sulpicius' writings. But in fact the "cultural memory" (30) of Martin included many different representations of the saint. It is even possible to wonder how much Martin himself had self-consciously contributed to the molding of his own image as a saint. Sulpicius once described a dream in which he claimed to have seen Martin holding a copy of his Life. Martin had a reputation for his reticence to speak, but in this case he offered his own literary critique of Sulpicius' Life without uttering a word: he was smiling. Martin would also have enjoyed reading Vielberg's very interesting book.