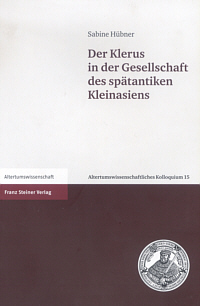 By the end of the fourth century the hierarchy of the Christian church in Asia Minor included, at any particular moment, a few hundred bishops and many lesser clerics, well over 10.000 in total. Modern scholars have often studied the bishops, either individually (for instance, the famous Cappadocian Fathers and John Chrysostom) or collectively as community leaders. Sabine Hübner's excellent book now examines the other clerics, including priests and deacons in particular, but also readers, cantors, doorkeepers, and gravediggers. Her book provides a comprehensive survey not only of these lesser clerics in Asia Minor during the fourth, fifth, and sixth centuries, but also more generally of the clergy as an ecclesiastical institution in the eastern Roman empire during late antiquity.

Hübner's book combines two perspectives. One is a focus on the epigraphical evidence for clerics in Asia Minor. Her meticulous collection of data includes about 500 men (and a few women who served as deaconesses), recorded primarily on tombstones and other dedications dated between the early fourth and the mid-sixth century. This is, admittedly, a tiny sample of clerics, since during these three centuries certainly well over 100.000 men served in the clergy. On the basis of this collection Hübner discusses the social backgrounds and families of these clerics and suggests that the use of a clerical title had become an indication of status, just like the imperial name Flavius or Aurelius (Chapter 1). She then analyzes specific case studies. One includes Corycus, a city in Cilicia, and Korasion, a nearby village in Isauria. Of the almost 100 clerics known from these two towns, many, including some of the priests and deacons, continued to work as tradesmen or manual laborers (Chapter 2): "Nach ihrer Ordination zum Kleriker behielten diese Männer ihre vorherige Lebensweise bei" (111). A second case study is a small collection of epitaphs from the vicinity of Laodicea Catacecaumene in Pisidia that venerated clerics for specific virtues such as piety and abstinence. Hübner associates these unique commemorations with local disputes over orthodoxy and heresy (Chapter 5).

The second perspective of this book is an overall discussion of various aspects of clerics and their service. For these analyses the most important sources are no longer the inscriptions, but rather emperors' edicts from the entire period and the Novels, the new laws, of the emperor Justinian in the mid-sixth century. Because of this reliance on legal texts, in terms of both subject matter and implications these analyses extend beyond the church in Asia Minor. In Chapter 3 Hübner attempts to characterize the motives for becoming clerics. Small landowners might be interested in acquiring an influential patron in their bishop. Manual laborers and tradesmen could enhance their prestige. Local notables received immunity from having to serve on their municipal councils. This emphasis on personal motives raises the question of the importance of spiritual values in clerical service. Even though legal and ecclesiastical texts insisted that clerics were to be models of a respectable lifestyle and proper behavior, Hübner can easily demonstrate that not all lived up to those ideals (Chapter 4). Clerics indulged in nepotism and simony, collected fees for services, neglected their duties, and were accused of sexual improprieties. These questionable activities hence meant that the behavior of clerics was no different from that of their parishioners. "Die meisten Kleriker zeigen in den Inschriften vom 4. bis 6. Jh. keine Anstrengungen, ihre hervorgehobene Stellung durch besondere außeralltägliche Qualitäten zu begründen und zu rechtfertigen" (186).

Hübner then examines ecclesiastical finances (Chapter 6). In the mid-seventh century the official lists of sees recorded 33 metropolitan sees and about 440 suffragan sees in Asia Minor. Their incomes varied enormously. Constantinople and the larger metropolitan sees were wealthy; most of the others were comparatively impoverished. Because the size and prestige of sees determined their capacity for remuneration, the financial support that these smaller churches could offer their clerics was only "ein Zubrot" (228). The most interesting chapter is Hübner's discussion of clerical careers and the possibility of advancement (Chapter 7). Since priests and deacons at large cities sometimes used their own resources to become local benefactors, Hübner suggests that these high-ranking clerics were recruited from the upper social classes. Bishops too were chosen from comparatively wealthy men, such as local notables or former imperial magistrates. The same characteristics that helped men acquire offices in the imperial administration, wealth and education in Greek culture, were also influential in the selection of bishops and the priests and deacons at large sees. In the final chapter Hübner considers some of the implications of this pattern of recruitment (Chapter 8). Humble tradesmen and laborers might become low-ranking clerics, but it was unlikely they would advance much higher. Instead, already prominent notables were recruited as bishops and as priests and deacons at large cities: "war es gerade die Kirche, die bei der Auswahl ihrer Kleriker Standesschranken bewahrte" (265). Rather than producing a new homogenous elite of men from different social classes who had been blended together in spiritual service, the clerical hierarchy both replicated and reinforced the clearly differentiated ranks and statuses of Roman society.

Hübner's general conclusions deserve to be evaluated against the data from other regions throughout the empire. These comparative studies might also add some nuances to the chronological development of the standing of the clergy during late antiquity, because in order to gather enough information for Asia Minor Hübner has been forced to conflate the evidence from three centuries. This conflation has resulted in a rather static picture of the clergy. Another tactic for extending Hübner's analysis would be an examination of some well-documented careers. Asia Minor in fact offers a few excellent examples of priests whose careers deserve further study. Basil of Caesarea and Gregory of Nazianzus, two of the famous Cappadocian Fathers, are typically evaluated as exemplars of the roles of bishops during the fourth century. But before they became bishops, they served as priests for almost a decade; and some of their letters, sermons, and other writings survive from their tenures as priests. Studying their pre-episcopal ecclesiastical careers would offer an excellent means to evaluate and supplement the implications of Hübner's stimulating model of clerical service in Asia Minor.