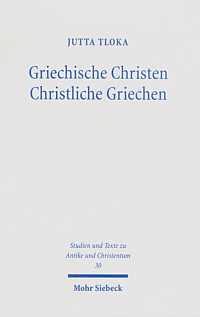 This book examines the efforts of two representative Christians to make the gospel palatable to Greeks who, under Roman rule, had come to see the refined use of their own language as a badge of collective identity. The professional orators of the second sophistic had learned from Isocrates, the first to pronounce that language rather than lineage makes a Greek, that when the city-state has lost its independence the pen is mightier than the tongue. As the shaping of the moral life succeeded the regulation of civic affairs as the principal business of the rhetorician, the quarrel between philosophy and eloquence was appeased. Both, however, were open only to those with the leisure and means to support a protracted education, and the consequence (as Plato had foreseen) was that the pursuit of ultimate truth, like every other profession, was deemed to be a task for private brotherhoods, each devoted to its own master as other guilds were dedicated to patron gods. This sketch, which relies primarily on standard works of twentieth-century scholarship, is no doubt unduly schematic: it ignores the sharp dichotomy between sophists and philosophers which is repeatedly affirmed in the canonical work of Philostratus, it falsely implies that philosophers of this age were always eloquent, it overlooks many frivolous or sycophantic writings by which sophists enlarged their incomes, and it depreciates such figures as Epictetus and Marcus Aurelius who, for different reasons, belonged to no elite. Yet it remains true that in the two centuries before the accession of Constantine, it was a general presumption in the Greek world that to say a thing truly one had to say it well, and that, so long as the Church's literature was as beggarly as the majority of its adherents, learned pagans would examine its tenets only with the aim of showing off their own powers of invective.

Origen, whose acquaintance with the great schools of philosophy is amply documented, is taken here as a representative doctor of the Church in the age before Constantine. The panegyrics of Gregory Thaumaturgus and Eusebius, together with his own letter to Gregory in the Philokalia, testify to his use of Greek philosophy as a training in thought for neophytes and as a means to the resolution of obscurities in ecclesiastical doctrine. Philosophy was for him not merely a tool of apologetics but the cement of understanding: belief was enough for salvation, but no intelligent Christian could sincerely profess what he found self-contradictory or repugnant to common truth. The opponents of philosophy forget that Christ, as logos or reason, is the shepherd of rational thought in every soul, be it pagan or Christian. All souls were formed initially for the contemplation of God, but all are fallen: the philosophers are therefore wrong, to imagine that the vision of God can be restored without divine assistance, and equally wrong to maintain that only a handful of souls in every generation are equipped to receive the discipline of the schools. Only the revelation of Christ, pre-eminently though not only in the scriptures, makes it possible for anyone to attain what is promised to all; the scriptures, however, do not explain themselves, and must be interpreted by a principle analogous to the Alexandrian canon of explaining Homer from Homer. One difference between the Bible and Homer is that there are passages in the former which desiderate an allegorical reading of other passages, and it by this expedient, rather than by the cultivation of superficial graces in style, that Origen sets out to educate his fellow-Christians and to reconcile learned pagans to the arcane vulgarity of the Word of God.

In this discussion Tloka achieves a synthesis of the best scholarship, with illustrative quotations from the whole body of Origen's writing; at her own study gives rise to questions which she ought to have noticed even if she could offer no solution. What is the relation, for example, between the syllabus which Origen himself ascribes to Solomon, in which ethics is followed by physics and theorics marks the climax, and the syllabus which he is said to have enjoined upon his own pupils, where the order of ethics and physics was reversed? Can we discover in either of these a counterpart to the palimpsest of readings according to body, soul and spirit at De Principiis 4.2.4, and does it follow from this conceit that the true equivalent of reading Homer from Homer is not the exposition of one text through another, but the anatomy of the written word in accordance with the threefold character of the word incarnate? Tloka does at least append a fruitful note on Origen's career as a pedagogue, which seems at first to have required neither ordination nor familiarity with pagan thought. Only when his celebrity won him an audience of heretics and pagans was it necessary for Origen to go to school again with a pagan master, and his teaching of a more liberal curriculum in Caeasarea was quickened by the same apostolic zeal that had sustained his Alexandrian ministry.

John Chrysostom, the other specimen preacher in this volume, inhabited a world in which the only martyrdom open to a Christian was the cremation of his own passions under monastic discipline. As the world flowed into the Church, it became the duty of the Churchman to arm the man of the world with reasons for conversion; at the same time, it was not the hatred but the flattery of the ambient culture that threatened to come between the Christian and his God. To be great in the present world was to lose one's franchise in the heavenly realm that Christ prepares for all by his condescension; the believer would be happier in the cloister than in the city, but he cultivates the arts of civic life to make new patriots for the kingdom, decking his speech with rhetorical ornament not to beguile the natural man but to wean him from his follies. If he is called reluctantly to the priesthood, he will regard this as a summons to witness rather than as an avenue to power. Children will be among his special charges, and if zealots accuse him of compromising the purity of the Gospel, he can argue that he is following the example of Paul, whose who camouflages all the shifts of rhetoric under a show of artlessness. His use of rhetorical terms to disguise the peculiar infelicities of Paul's style is scarcely candid, but as this study demonstrates, it is not his aim to turn every believer into a Libanius. Philosophy is deployed against philosophy in Origen, art against art in Chrysostom; each secures his own faith and that of his readers, but with no intention of raising up an élite from the elect.