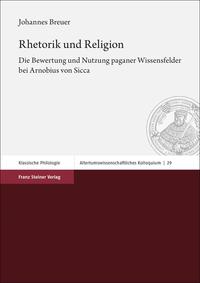 Arnobius is a more fashionable author than he used to be, though theologians without a classical training still seem able to make little of him. His treatise Against the Nations is the first work on such a scale that eschews any argument for the antiquity of the Christian faith, adopting a sceptical posture that allows him to concede more to polytheism than any previous apologist while ridiculing sacrifice with arguments that could be pressed with equal force against the slaughter of animals in the Jewish Temple. The peculiar merit and interest of the treatise is most apparent, as Breuer sees, when it is treated as a rhetorical performance designed ostensibly for the conversion of all pagans, though with the special goal of opening the eyes of those responsible for the sufferings of the church. In accordance with a venerable tradition of Christian advocacy, the tools of pagan rhetoric are deployed against their inventors, and the result, as Breuer ingeniously observes, may be compared to the improbable feats of eloquence performed by Caesar's Gallic opponent Cristognatus and by Calgacus, the famous but impotent critic of pax Romana in the Agricola of Tacitus (67). In his determination to prevail where these barbarians failed with honour, Arnobius follows another convention of apologetic by denouncing the philosophers for their complicity in rites that shame the gods, while holding up the figure of Jesus Christ to them as a paradigm of the virtues that they have failed to display, and as the sole guarantor of that life after death which they either despise or labour in vain to prove. Since his diatribe is punctuated by the responses and objections of imagined interlocutors, Breuer suggests that Arnobius casts himself as the principal speaker in a dialogue whose other parts are assigned, as in Cicero, to real contemporaries (178); for all that, there may be more argumentative vigour than historical veracity in the speeches ascribed to them, even if one is Porphyry of Tyre (148).

Although it cannot be assumed that a change of vehicle is bound to change the content if the Gospel - the New Testament, after all, improvises new forms for the letter, the biography and the apocalypse - Breuer's survey of previous scholarship (23-33) shows that Christian use of rhetoric and philosophy in the ancient world has long been a Rorschach blot in which one scholar perceives apostasy, another syncresis or symbiosis, and another mere opportunism (or, as Origen puts it, a spoiling of the Egyptians). Most modern studies agree at least, though not always with approbation, that Christians adapted all that they adopted, and this is a point that is illustrated at length in the centrepiece to Breuer's thesis, a technical analysis of the argument in the first book Against the Nations. He finds that it lacks the elegant praefatio by which advocates wooed the goodwill of the jurors, and plunges abruptly into the exordium, or statement of the charge against Christianity. Since this adduces the frequency of natural disasters as proof that the gods have been estranged by neglect of sacrifice, the subsequent narration, or story told in rebuttal, is a sarcastic demonstration that there has not been any change in the laws of nature. The rest of Book 1 is occupied by the detailed refutation, in which Arnobius argues first in the status coniecturae, showing that natural evils cannot be laid at the door of Christianity, then in the status finitionis, contesting the pagan definition of evil, and finally in the status qualitatis absolutae, maintaining that there is no crime in refusing to sacrifice. After particular arguments a tempore and a loco, he goes on to advance an antikategoria, proving his adversaries more worthy of divine wrath than his coreligionists, and an inference a minore ad maiorem, from the dubious worship of lesser powers to the duty of worshipping the highest God. The appeal to the life of Christ is an argumentum a re, while the vindication of the evangelists is an argumentum a persona. The peroration reveals the shift of ground from defence to Indictment, from petition to exhortation; and lest we should suspect him of forcing the same Procrustean wiles upon Arnobius that are daily practised upon poor fishermen by New Testament scholars, Breuer concludes that Arnobius is not bound by any template, but borrows from rhetoric only such techniques as are necessary for the furtherance of his case (361).

Breuer's project is well executed, but because of its limited scope we are left to wonder whether Arnobius is faithful or unfaithful to the Roman tradition of declaration, typical or untypical of Christian apologetic in the world before Constantine. Do his departures from the conventional structure of a forensic apology signal a contempt for classical models (such as Lactantius professes while emulating Cicero), or is he, in the contrary, aligning himself with those models by claiming the native practitioner's right of innovation? Should we assume that, because he was a late convert, he was unaware of his Christian predecessors, or should we infer, from his purposely hirsute style and his erudite disavowal of linguistic purity, that he has learned from Tatian to throw the charge of barbarism back into the teeth of the verbal purist? Here we may remember Breuer's own comparison with the speech of Calgacus; if we also accept both dates that Jerome assigns to the composition of the treatise Against the Nations, we may postulate a history of redaction spanning two centuries, which would certainly have been time enough for this seasoned declaimer to master all the tropes in the Christian repertory. Of course this is conjecture, but it is no conjecture to say that Against the Nations is an extraordinary hybrid of imitation and invention, of the generic and the peculiar, of polymathic antiquarianism with the courage to praise the new for being new.