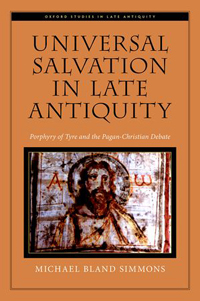 This book is a synthesis and expansion of the studies produced by the author over a period of two decades with the aim of showing that Porphyry has been maligned by the Christian witnesses who insinuate that he reserved the possibility of salvation for a philosophic elite. The gullible modern readers who accept these tainted reports have ignored the passages in his Philosophy from Oracles which plainly speak against them (35-51), together with no fewer than 51 revealing admissions in the fifth book of the Theophany of Eusebius, his most disingenuous critic (97). He does not, of course, offer salvation without exertion, but the tripartite scheme which he sets before all readers "coincided with the Tetrarchy's attempt to revitalize the traditional cults of the Roman Empire" (216) and consequently earned him the hostility of Christians who, after Constantine's triumph, were able to make free with his reputation. While Christian thought is not its chief concern, it is one of the merits of this volume to provide the fullest inventory in English of the materials employed by various scholars in the reconstruction of Porphyry's infamous treatise against the Christians (52-91). This is only one instance of the author's original and assiduous scholarship, which is unfortunately hidden from us at times by his practice of carrying on discussion in extensive notes which are printed on separate pages - a practice entitled to no indulgence in the twenty-first century. It goes without saying that readers will at times wish to quibble with Simmons' exegesis of the texts that he adduces: if we grant, for example, that Porphyry offers salvation to every reader of his book, does it follow that he offers it to the world at large (36)? We can say none the less that the case for Porphyry's "universalism" has been made out with sufficient cogency to lay the onus of refutation on those who deny this position; I shall therefore confine the rest of this brief review to other theses which appear to me, on the contrary, to have been too summarily handled by Simmons, unless I have lost the argument in the notes.

Having maintained in 1995 that Arnobius' treatise Against the Nations is a rejoinder to Porphyry, written from 302 to 305, Simmons now devotes seven scornful pages to my defence of Jerome's dating of the work to 326 (56-63; cf. Antiquité Tardive 2004). Here I must be briefer than he is, noting only that: (1) he grossly exaggerates the inaccuracy of Jerome's Chronicle; (2) he attributes to me alone many observations first advanced by Oliver Nicholson; (3) he has yet to show that any ancient author would have reckoned from the birth of Christ when estimating the age of Christianity at about 300 years; (4) he has found no proof that Christians were conspicuous before 270 among the Goths or before 303 among the tribes who were known as Alamanni (1.11); (5) his argument from the silence of Arnobius regarding Constantine, if generally applied, would prove that Athanasius wrote the De Incarnatione before 312; (6) his argument that a critique of sacrifice would have been superfluous once Constantine had forbidden it confuses probation with suppression. Another scholar's summary observations on the use of the term Alamanni, which in fact mean less than Simmons wants them to mean, are styled an "astute and insightful analysis". He pronounces it inconceivable that Arnobius, if he were writing in 326, would have overlooked letters by Constantine against pagan worship which, even if genuine, would not have been disclosed to a private citizen (60-61); the counterpoint to this argument from silence is an equally fallacious compilation of the apologist's references to African cults as though the mere mention of them in such an eclectic work could rebut my statement that he does not parade his African origin (302 n. 50). Strangest of all, this long excursus is undertaken simply to prove that Arnobius could not have read Iamblichus, though this would surely have been as possible in 303 as in 326.

Simmons maintains that Porphyry and Iamblichus both prescribed three stages in the deliverance of the soul. The first is the subjugation of the appetitive soul through the cultivation of virtue in conjunction with the worship of civic deities; the second is the purification of the spirited soul in order that the intellect may be wholly engaged in the contemplation of Being; the third is the mystical union of the intellect with the very source of Being. Where Porphyry, however, held that theurgy was necessary only to the first of these stages, Iamblichus allotted a distinct mode of theurgy to each of the three. The evidence that this is true of the culminating stage, the mystical union, is a passage from On the Mysteries (5.22) in which Iamblichus states that he can lay down no regulations for the man who is on the threshold of the ascent to the One, but goes on to say that sacrifice, if rightly performed, will join together the whole class of higher beings (153). It is not so clear to me as it is to Simmons that the "higher" include the highest, for whom he expressly says that he cannot prescribe a rule. Nor am I convinced that Iamblichus broke with his former teacher when he represented matter as a "mutually beneficial participant" with the soul in the salvation of the cosmos (156). Augustine says that, according to Porphyry, souls descend in order that through the experience of evil they may perceive the superiority of the good (City of God 10.30); although Augustine's testimony implies that matter is radically evil, the association of soul with matter is not, or need not be so. The evil in matter, for any Neoplatonist, can only be a deficiency in goodness; the goodness that is ascribed to it by Iamblichus (if he means common, and not intellectual, matter) can only be a capacity to be something other than evil. The "Soteriology of Descent", writes Simmons, "is the exact opposite of Porphyry's Soteriology of Ascent"; for my part, I doubt that the difference between the two thinkers can be reduced to such a polar opposition.