David A. Gerber: Authors of Their Lives. The Personal Correspondence of British Immigrants to North America in the Nineteenth Century, New York: New York University Press 2006 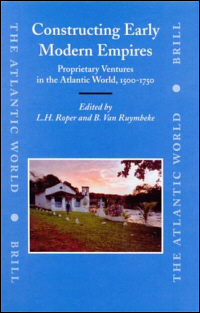 This volume of essays is the fruit of three conferences: of the 1999 Annual Meeting of the Organization of American Historians, of the Annual Meeting of the French Colonial Historical Society in Charleston, SC, in 2000, and of the 7th conference of the Omohundro Institute of Early American History and Culture at Glasgow in 2001. Sessions in all three conferences focused on proprietary colonies in the Spanish, French and English colonial empires. Put differently: the volume was the result of much deliberation and discussion of different scholarly clienteles - that it took so long in production is probably the result of the publisher's stunning efficiency.

The book contains thirteen essays neatly divided into four unequally large sections: The first essay is devoted to an analysis of the functions of the donatary captaincies in Portuguese Brazil (21-53), and the second section to essays on "Adelantados and Encomenderos in Spanish America" (55-77). The next three essays describe various features of proprietorships in French America (79-188), and the last and by far the largest section deals with English proprietorships in the West Indies as well as in North America (189-409).

All essays essentially focus on how proprietorships functioned in their various colonial settings and neglect what I think is a vital feature of the Atlantic history approach: the dynamic relationships between Europe and the New World. Almost all essays, too, describe the proprietorships essentially as failures, mild failures or dismal failures. I might add that the contribution on the Spanish Americas does not discuss proprietorships as agents of governance on a colonial level. Instead, it concentrates on the establishment of regional and local social and economic institutions that served to subjugate as well as integrate and exploit the indigenous population of the Americas into encomendias but worked well for the Spanish colonial elite. This is unfortunate because the focus of this essay does not allow comparison with the proprietorships of both the French and the English colonial empires.

Most of these essays are nicely crafted and insightful examinations of individual proprietorships; they offer good case studies of chartered companies as proprietors (Kenneth J. Banks on "Financiers, Factors, and French Proprietary Companies in West Africa", 79-116; Leslie Choquette, "Proprietorships in French North America", 117-131) or a comparative analysis of different systems of proprietorships.

Indeed, this essay of Philip Boucher on "French Proprietary Colonies in the Greater Caribbean, 1620-1670s" (163-188) in a way projects the problems as well as achievements of proprietorships most convincingly. His brief analysis suggests seven reasons for the dismal failures of chartered companies as proprietors - "undercapitalization" (183), "managerial and administrative problems" (183-184), colonial resistance to company monopoly (184-185), lack or withdrawal of royal support (185), "Iberian empire strikes back" (185), a reason in which I would include attacks and interferences by Britain and British privateers, and finally "Amerindian attacks" (186) and the exigencies of "European War" (186). Boucher thus neatly sums up the results of the analysis of French and English proprietorships in the seventeenth as well as eighteenth century.

Admittedly, depending on the circumstances some of the causes mentioned are more important than others: In the case of Georgia, for example, James O'Neil Spady correctly observes that the "demise" of the Georgia Trustees' project "of their colony-as-reformatory was less due to the failure of an unrealistic plan than their loss of a power struggle with colonials possessing different visions of colonialism" (262). Spady's conclusion is convincing as well as specious and probably irrelevant. It is convincing because the Trustees indeed lost the fight with the pro-slavery colonists both in Georgia as well as in the governmental offices in London. It is specious because it judges the Trustees' efforts purely from their perspective which was that of the London philanthropists although their project clearly was subject to discursive forces in the Atlantic world in which the colonists played an equally large role as that the Trustees claimed. And it is irrelevant, because the outcome of the fight between the two groups was never really in doubt: It was and is simply unconceivable that within the large slave-holding economies and societies Georgia could have stood out as a non-slaveholding society; by the early 1750s even the staunchest supporters of the Trustees, the Protestant settlers at Ebenezer, had deserted their cause. Finally his conclusion does not take into account that the basic design of the trusteeship of Georgia was meant by the English government as a trial run for future far reaching colonial reforms. And let me add: I remain not really convinced that the Orphanage at Bethesda, Georgia, really represented such a "substantial stabilizing force to the colony" as Spady believes. During the American Revolution Georgia more than most other colonies/states experienced fierce infights, incredible chaos and stunning social and governmental instabilities.

There is no room to discuss at greater length the other important contributions. In sum, these essays do not revolutionize our picture of proprietorships in the New World. They rather reconfirm our negative perception of this form of governance while at the same time they affirm the relative success of the English compared to the French proprietorships. Whether a closer examination of Spanish and Portuguese governance would have modified this conclusion, I do not know.

It seems clear to me that the examination of the Baltimore proprietorship purely from the religious perspective (Debra A. Meyers, "Calvert's Catholic Colony", 357-388) falls short of a convincing indictment of the Baltimores, partly because the Baltimore's Catholicism was probably far less strong than the formula "the Calvert clan's pious mission" (386) suggests.

In their introduction the editors make the usual large claims: The subject of proprietary rule had been neglected by historians (8) and proprietary rule has been "consistently styled [...] as inherently inadequate colonization mechanisms" (11). Both statements miss the mark: Even if one only looks at English and French scholarships - and the editors indeed ignore the large body of Spanish, Portuguese and German scholarship on these issues! - the editors overlook the work of Alan Tully on Pennsylvania, of Thomas L. Purvis on New Jersey, of Harold D. Davis and Phinizy Spalding on Georgia or of Gustave Lanctot and Marcel Trudel on the Nouvelle France.