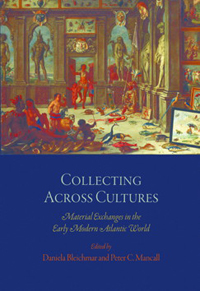 The history of collecting global artifacts reveals a world of contradictions and misrepresentations. Why did the Spanish admire and marvel at Aztec regalia in 1520, only to melt them to coins fifteen years later? Why did early modern cartographers imagine palm trees in New England? And what led Capuchin missionaries in Central Africa to draw the rhinoceros as a unicorn?

In Daniela Bleichmar and Peter C. Mancall's edited volume Collecting Across Cultures: Material Exchanges in the Early Modern Atlantic World, such interpretive questions guide an informative exploration of the connections between early modern practices of collecting and the global exchange of peoples and objects. With essays by historians, art historians, anthropologists, and archeologists, Bleichmar and Mancall's volume contributes to the scholarly discussion of the innovative and circumscribed ways in which global exchanges of materials and people produced knowledge in the Atlantic world.

Spanning an era from the early sixteenth to the early nineteenth century, the volume covers the expansion of the British, Spanish, and Dutch empires, and emphasizes the transatlantic slave trade, the native world of North and Latin America, and missionary and diplomatic activity in Central Africa and Asia. A major contribution of Collecting Across Cultures is that it looks beyond the well-documented histories of the "cabinets of curiosities" - or Wunderkammern. While Daniela Bleichmar examines their erasure of geographical specificity and their spatial representation of narratives of elite travels, the remainder of the volume focuses more on diverse forms of "collecting" rather than on particular institutional or personal collections. This allows for a discussion of collecting practices that bring together a surprising range of fields and topics. For instance, José Ramón Marcaida and Juan Pimentel argue that in seventeenth-century Spain the collecting of paintings mediated between artists and natural historians. As still life painting both expressed baroque aesthetics and constituted a reflection on "the difficulties in observing and representing nature," the work of natural philosophers played a more prominent role in seventeenth-century Spain than existing scholarship has allowed (110).

If practices of collecting created knowledge about the natural science and the New World, they also elaborated the projections of those involved in gathering global objects. Several of the contributions trace how the circulation of visual materials and other objects followed increasingly generic or stereotypical patterns. Benjamin Schmidt's study of "transmediation" in early modern exotica explains how visual elements like the parasol were stripped of geographic specificity and appeared across different print genres and artistic forms. Schmidt writes "if tropes, images, and objects moved from graphic to theatrical form and across linguistic and national lines, they also migrated to painting, tapestry, ceramics, and a whole range of decorative arts. In each of these transfers [...] icons both lost and gained signification; the further they traveled from their point of origin, the less of their original meaning they retained and the more they came to stand for a new and generic exoticism" (49). The interest in the parasol originated as a "signifier of Oriental sovereignty and power" (53), but as it was reproduced by a range of artists and printers it evolved into a decorative, loose, and even ironic prop for non-European people and locales: a marker of the generically exotic.

This attention to the power of such imperial fantasies is one of the key strengths of Collecting Across Cultures. Megan O'Neil's discussion of two nineteenth-century French albums of photographs and drawings from Mexico points out how the practice of collecting locally produced images of landscapes and "types" satisfied traveler's "desires to preserve personal memory," while simultaneously representing a generalized collective experience of Mexican travel (271). Similarly, Pascal Riviale argues that following the popularity of Egyptology in the early nineteenth century, interest in archaeology surged, and publishers began to consider readers' aesthetic tastes in producing "picturesque albums." In Latin America such collections engendered a "'visual economy' [which] contributed to the development of stereotyped representations of Latin America, some of which endured until the end of the nineteenth century" (267).

The essays in Bleichmar and Mancall's volume do not merely address issues of representation, however, but also delve into structures of power and inclusion in an imperial world. Robert Batchelor explores the relation between collecting and domesticity in seventeenth-century Banten and England. An analysis of palm-leaf manuscripts from northwestern Java reveals the ways Banten was imagined as what Levi-Strauss called a "house society," in which differentiated groups of people were gathered together, and in which cross-cultural inter-linkages counted for more than kinship or the "continuity of lineages" (122). The anxiety about non-Europeans' challenges to this domesticating vision of global exchange suggests to what extent the collecting of "objects, people, and exchange practices" (133) was central to the emergence of an Atlantic world episteme.

The power relations behind the collecting of people in the Atlantic world are further highlighted in Trevor Burnard's discussion of seventeenth-century Jamaican slave inventories and Peter C. Mancall's history of the collecting of both living and deceased Native Americans in the seventeenth and nineteenth centuries. Account ledgers categorized and (later) individualized slaves according to gender and practical skills, asserting European notions of patriarchy and hierarchy, and the commodification of individuals through the erasure of family ties. The emergence and resurgence of the collecting of Native American bodies suggests that the colonial understanding Native people as "specimens" reflected historical moments when Indian nations were not recognized as potential allies for European imperial projects. At the same time, creole and non-European elites appropriated European science for their own ends. Sarah Benson, for instance, recounts how Narai, the King of Siam in the mid-seventeenth century, collected and even exoticized European objects, and in the process challenged but also replicated European "systems of value, scientific study, and diplomacy" (157).

Collecting Across Cultures hereby offers a wide-ranging and insightful introduction to early modern practices of material exchange. Usefully illustrated and including twelve color plates, the volume can hardly be faulted in bringing to life the many sites where disparate practices and ideas concerning collecting surfaced. Collecting Across Cultures is a significant contribution to the study of knowledge creation in the early modern world, especially in its attention to issues of trans-mediation, misrepresentation, and the complicated racialized patterns of inclusion and exoticization. The volume will be of great value to students of early modern print culture, art history, church history, race, and science. Those who are interested in the connections across these different fields are particularly well served.