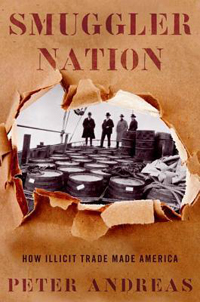 Ranging right from America's colonial era to the present day, Peter Andreas' survey of the illegal underbelly of the US economy is a highly readable tour of the seamier side of commerce. Running the gamut from rum to illegal pornography, Andreas seeks to convince his reader that rather than being a minor inconvenience to law-abiding officials, smuggling has in fact profoundly influenced the nature of the American economy for over three hundred years.

The most impressive features of this book are its readability and its engagingly broad definition of smuggling across time and place. Clearly aimed at a non-academic audience, Andreas' prose flows easily, making the book extremely accessible. Nevertheless, much scholarly research has gone into its writing. Detailed footnotes demonstrate that the author has consulted the most up to date material on each era that he deals with. This colonial historian was impressed with the deeply researched early chapters on the pre-1783 era. By embracing a broad definition of illegal trade Andreas is able to unite areas of the American economy that have not necessarily been considered together before, yielding some novel insights. Principal themes include how alcohol has often provided a focal point for illicit trade, starting with the trade in rum and molasses from the French and Spanish Caribbean in the eighteenth century, moving onto the contraband supplies of rum (and then whiskey) sold to native Americans in order to get them drunk and fleece them of animal skins and land, and ending with the large-scale success of smugglers in defying the Prohibition of alcohol in the 1920s. Likewise, the smuggling of people has moved from illegal US involvement in the slave trade after 1808, through to the arrival of Chinese immigrants in the face of government efforts to restrict their entry in the nineteenth century, and on to the present day politically charged initiatives to prevent the entry of Mexicans into the United States. These stories, followed by Andreas across all three centuries of United States history, illustrate quite clearly how viewing illegal trade as a product of twenty-first century globalization is entirely erroneous.

This global perspective is the theme that Andreas uses to bring his story together in a concluding chapter on "America and Illicit Globalization." Here, the author explains how wrong it is to see the modern global world as being responsible for bringing new problems of smuggling and illegality to America's door. Instead, the modern "conflict connection" (348) which describes a link between illicit commerce and war - the issue of African "blood diamonds" for example - can be traced right back to the Revolutionary era, where conflict fueled illegal importation of provisions and arms into the young United States. Similar continuities characterize the story of illegal immigration. Thus, the Mexicans were "relatively late arrivals in the story of illegal migration" (296) - the global movement of Europeans and Asians in the nineteenth century being the first chapter in the story. Accompanied by an epilogue which explores the shifting definitions of illegality, these concluding thoughts convincingly support Andreas' main argument that America always has been (and always will be) a smuggler nation.

There is much to like in Andreas' account. He throws a spotlight on the importance of smuggling throughout American history and illustrates very clearly two principal points - the line between legal and illegal is never really a clear one and the idea that a global borderless economy is bringing new threats to America's door is groundless when smuggling is put in historical context. What is missing, however, is a more complex analysis that moves beyond the (somewhat obvious) statement that "history matters." My desire for more explanation in the course of Andreas' book as to why history matters undoubtedly stems from the fact that I am a historian, but more profound analysis would have made the book a more satisfying read without reducing its appeal to a general audience. Too often, Andreas provides historical examples but fails to develop them convincingly. For example, the author asserts that contraband trade lengthened the Civil War much as contemporary conflicts are complicated by "conflict commodities" (174). However, Andreas does not offer any concrete evidence that smuggling actually lengthened the conflict but only describes illegal trade that took place during the Civil War. The reader is, therefore, left uninformed as to how precisely "conflict commodities" function over time and space.

At the same time, there were some very intriguing lines of inquiry that were left underdeveloped. The latter part of the book maintains a steady focus on government intervention in smuggling, and the issue also makes an appearance in earlier chapters. But Andreas never really gives us an analysis of the role of the American government in either preventing or encouraging illegal trade. Did this role change over time or has it always remained the same? Did the US government provide a uniquely encouraging environment for smugglers? This second question is one that we cannot really answer without addressing the United States in a transnational context, and this is a second issue that is frustratingly underdeveloped in the book. While Andreas is seeking to debunk the myth that globalization lies at the root of a rise in illegal trade in the USA, he does not consider the place of US illegal trade in a global context. Is America's status as "smuggler nation" any different to that of other nations? Most intriguing would be to compare America and China. The twenty-first century Chinese economy has a large illegal component, and the country is famous for the illegal theft of intellectual property. The nation also has a fascinating historical relationship with illegal trade: in the early modern era the Chinese successfully guarded the recipe for porcelain from European visitors. Today, however, the Europeans have not found it so easy to prevent the Chinese from copying imported goods. The smuggling of intellectual property is an issue that Andreas specifically addresses in Chapter 6 and the failure to discuss it beyond the limits of the English-speaking world illustrates perhaps the most obvious missed opportunity for a more global (and more intriguing) history of American smuggling. In sum, Andreas is to be congratulated for writing the first, comprehensive history of American smuggling. However, there is more work to be done if we are to understand why it is important that the United States is a "smuggler nation."