David A. Gerber: Authors of Their Lives 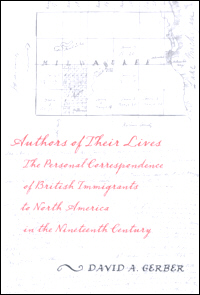 Over the past 30 years, immigrant letters have been the subject of numerous articles and have served as source material in increasing numbers of book-length studies. The first collections were edited no less than 200 years ago, and still scholarly editions appear every year. David Gerber's book, by contrast, is something entirely new: a monograph on immigrant letters. Based on 45 collections of 19th century English, Scottish and Protestant Irish letters to North America in archives and 27 published ones, it systematizes much that is known and presents many novel and valuable insights. The author pleads for a new approach to immigrant letters and takes on ever so many historians who have carefully prepared editions, providing biographical and social context, tables and annotations, all that on the assumption that, with such help given, letters can speak for themselves. No, they cannot, says Gerber, and continues with a touch of condescending irony: "If we cannot easily find a way to conceive of immigrant letters as texts and find meanings in them on that basis, we can reprint them, and allow them in their original form to speak to us, and to edify and move us." (43).

Actually, this work is two books in one, despite many interconnections. The first six chapters "are concerned with the analysis of the elements of immigrant epistolarity" and attempt to "understand the immigrant letter on its own terms and not as the servant of other projects" (28). This provides the background for Chapter 1, which sketches a history of the modern uses of immigrant letters, with the tenor that previous scholars produced works that were in some respects excellent, but did not really reach the core of the matter.

Chapter 2, entitled "Forming Selves in Letters," is arguably the heart of Part I. Here the author expounds on what he calls the immigrants' "second project" (the first one being to provide a livelihood). The immigrant, he believes with Handlin, finds himself in a deep psychological crisis upon his arrival. "Emigration puts a singular strain on personal identity, because it is a radical challenge to continuity." (67). Most traumatic was the interruption of personal relationships that from now on could be sustained only through correspondence. Continuity, vital for the formation of personal identity, could be provided by the letters from and to home. This is why the migrant's past "must be at the center of any effort to understand immigrant personal correspondence, for the exchange of letters was based on the desire to maintain connection with the past" (64).

Chapter 3 is devoted to systematization. The explicit or implicit "negotiation" of the frequency and content of letters between the correspondents is analyzed in considerable detail, and so is the problem of truthfulness, concealment and omission. The content of letters is categorized as regulative (reciprocity and neglect, the mail service, confidentiality, networks), expressive (emotional states, nostalgia, guilt, rootlessness, reunion in heaven), and descriptive (circumstances of writing, events, daily life, what to write about). Chapter 4 gives a fine description of the postal systems of Britain and the USA and how their development influenced letter-writing. Gerber claims that mailing and receiving letters first brought many immigrants in touch with a bureaucracy and thus with modernity.

The last two chapters of Part I can be summarized briefly. There is valuable information about facts and difficulties concerning "first letters" as well as about the seasons and the days of the week when most letters were written. I fully agree with Gerber's claim that far more emigration was caused primarily by conflicts in the family than has been recognized in migration histories, and also with his statement that the "relational baggage" - a felicitous coinage - normally weighs heavier than national or regional traits. Lastly, he discusses the question of what is preserved and archived, and why, and the possible reasons for the end of a correspondence, which are generally hard to reconstruct.

Like the volume as a whole, its Part II is a novelty. Letters have been used as sources. Editions of immigrant letters have been commented, occasionally at great lengths. But this is the first detailed analysis unaccompanied by the text of the letter/s, except for a few brief quotations. There are four biographical vignettes, characterized as "an intensive investigation of personal correspondence in the lives of four immigrants... and the relationships embodied in their correspondence" (28) and "case studies in the epistolary construction of selves" (227).

Four immigrants, two women and two men, are presented mainly on the basis of their letters: the pertinent periods of their lives, the relationships spanning the Atlantic, and especially their own psychological development. Three of them are moderately successful in the "first project". But all four have personal problems, largely related to their transplantation. Gerber interprets in a circumspect, sensitive, imaginative manner. The portraits make for fascinating reading. And yet I feel somewhat uneasy about them. There is very much speculation to fill the many gaps in the sources. Moreover, I know what a tricky business interpreting immigrant letters is, and much as I trust David Gerber's judgment, I would prefer having a chance to compare notes by having the text of the relevant letters in the same covers.

The four case studies are meant to show how the author's ideas on immigrant letters can be implemented. But we may ask what exactly the author's intention is. "Understanding the lives of immigrants." (34). Ambitious, but one can try. "The present study offers a claim for analysis at the individual level as a way of testing our generalizations about people in large groups." (45). Quite successfully so. But - doesn't almost every immigrant letter lend itself to such a test, even if it's speaking for itself?

Unless I misunderstand the author, he considers his approach - understanding lives - superior to all other uses of immigrant letters. This is underlined by his repeated references to letters as "servants" of other projects (28, 34). It is here that I cannot follow. Asking about the psychology and relationships of immigrants is perfectly legitimate, and Gerber amply proves that his approach yields fine results. But why is that the most valuable way of using immigrant letters? We are not told, and until I learn the reasoning behind this position, I am stuck with my belief that historians ask questions, look for whatever may serve as acceptable sources and interpret those as best as they can. These may include immigrant letters. Of course, rigorous source criticism has to be applied to them, like to any source. But I can simply see no hierarchy of values in the responsible use of that genre. One might even go beyond history. Would not a linguist's or a theologian's approach to immigrant letters be worth as much as a historian's?

My doubts and objections notwithstanding, this is a fine book offering many new ideas and admirable results that scholars working with immigrant letters simply cannot afford to ignore. Gerber's particular emphasis on transatlantic personal relations and their key role is fully convincing. He enriches our awareness, and his more controversial positions will start worthwhile scholarly debates.