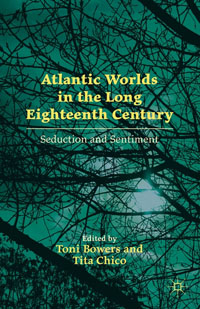 Based on a collection of essays presented at the 2008 meeting of the American Society for Eighteenth Century Studies, this volume makes evident that national literary narratives can only be understood in the light of the emerging Atlantic world where concepts of social order and sentiment were constantly challenged due to cultural and literary encounters. More specifically, the volume shows how tales about social order, seduction and sentiment were shaped throughout the long eighteenth century, how they challenged established narratives, and in doing so, how the latter gave rise to new ideas, ideals and mentalities. This collection of essays makes evident that what has been understood as national literatures on seduction and sentiment has to be conceived of as products of constant exchange and transculturation in the wider Atlantic world.

A first section explores how narratives about seduction and sentiment evolve in order to answer new social and political aspirations. Eve Tavor Bannet opens the discussion with a chapter on adulterous sentiments in domestic fiction. She argues that in America successful novels on adultery mainly were about the seduction of middle class or upper class wives. Juliet Shields uses Gilbert Imlay's The Emigrants to highlight that Europeans and Americans perceived migration and marriage differently. In European novels marriage was seen as a patriarchal and repressive institution (for women), while Americans saw it as a more egalitarian bond and a funding stone in shaping the Western territories' social order. Bryan Waterman brings the debate to the political spheres: he studies the short-lived social and literary stir caused by the scandalous affair between Boston lawyer Perez Morton and his sister-in-law Fanny Apthorp in 1788, branded in the testimonies of the time as an example of a general moral depravation. Coming back to fiction, Susanna Rowson's Charlotte Temple is analyzed by Michael Zuckermann, who shows that in the novel, seduction and sentiment narratives are used to demonstrate the frailty and irrelevance of prioritizing sentiment over morality and social order.

The second part of this volume presents alternatives to European and American narratives of acceptable sentiment and social order. In her essay on Andrew Marvell's poetry, Melissa Sanchez emphasizes his views on sexuality and patriarchy. Laura Stevens studies The Four Indian Kings: in 1710, four Native Americans travel to England where one of them, an Indian king, falls in love with an English woman. Their marriage, only made possible thanks to the Indian king's conversion to Christianity, illustrates the fantasy of an interracial union between Britain and America, at a moment in time when such alliances were neither politically nor socially acceptable. Heather Nathans focuses on how British and American audiences perceived the Jewish heroine of Shakespeare's The Merchant of Venice. A popular character on stage throughout the eighteenth century, Jessica's expression of sentiments is understood differently depending on the audience; she is seen as a temptress or as the seduced. Carolyn Eastman analyses travel accounts on interracial relationships and the consequences of these cross-cultural unions. As exposed in contemporary tales of seduction-and-abandonment, she contends that accounts of couplings between members of two different worlds are depicted as a transgression. Its outcome can, by necessity, be nothing but tragedy.

Answering the question of how sentiment is perceived in imaginative prose, a third part focuses on knowledge and doubt. Jennifer Thorn brings to light the juvenile death discourse and shows through the poems of Phillis Wheatley how parental grief as well as the ascension of their children are represented in a seductive way. George Haggerty studies what he calls the function of sentiment creating the queer effect in Brockden Brown's gothic novel Wieland.

This volume shows us the Atlantic World as a place where narratives of seduction and sentiment are not antagonistic, but on the contrary deeply intertwined. The eclectic nature of the narratives shows a variety of themes within the Atlantic World which apprehend the latter as a place where representations of sentiment and seduction of different nations and worlds constantly merged.