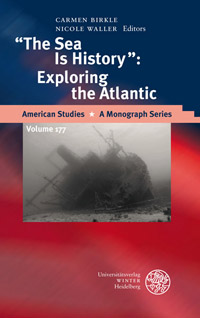 The name of this volume is derived from Derek Walcott's poem The Sea is History, which describes the sea as a vault of Caribbean histories; lost memories and missing monuments (Farrar, Strauss and Giroux,1986: 364). This collection aims to mark the Atlantic as a site of "loss but also of preservation and commemoration"(5). As the editors establish from the outset Atlantic Studies has been intensely stimulated by Paul Gilroy's The Black Atlantic: Modernity and Double Consciousness (Verso, 1993). The Atlantic paradigm promises to reveal such lost histories: "Atlantic Studies [...] is out to change not only the way we interpret history but what we consider history in the first place" (35).

To serve this end this collection brings together a genuinely interdisciplinary cohort of Atlanticists with diverse backgrounds in history, anthropology, literature, North American and Caribbean studies, and oral history. To demonstrate the breadth of the book, contributions range from Carmen Birkle's analysis of eighteenth century actor and playwright Susanna Haswell Rowson's play Slaves in Algiers which "displac[es] [...] slavery across the Atlantic and into the Orient" (140); Annette Trefzer's essay, The Cannibal Feast which offers a reappraisal of Andew Lytle as more than a writer of the Southern Renaissance, but also savage critic of the imperial enterprise; and Amina Blackwood Meek's analysis of memory and commemoration of the Middle Passage as a matter of spiritual reclamation and public policy in Jamaica.

In her essay Travelling Nurses Carmen Birkle provides an insightful exploration of the encounter between Jamaican creole Mary Seacole and English Florence Nightingale in the British Crimean War. Whilst Nightingale has been officially remembered and commemorated for generations as the forebear of the British nursing profession, Seacole's transatlantic adventure from Jamaica to Britain, to the Crimean battlefields, at the same time that Nightingale was forging her career in Crimea, has been systematically forgotten. However, as Birkle shows, reclamation work that began in the 1970s, is ongoing. Birkle's contribution is to explore the nuances of this encounter in the Crimea, that reveal the flow of circum-Atlantic ideas and culture, whilst also affirming the ways in which both women advanced medicine. Seacole championed scientific curiosity and empiricism, and incorporated Creole's botanic knowledge into her practical care of wounded soldiers. Nightingale aimed to reform hospitals and professionalise medical care, also "integrat[ing] science and nursing", albeit through a paradoxically conservative agenda that affirmed social hierarchy and shirked women doctors, even as she overstepped social boundaries through her own work institutionalising nursing. Both women utilised dominant discourses of imperial femininity to affirm their work. Birkle explores Nightingale's attempt to discredit Seacole according to the social mores of  of the day to good effect. However, this is with the exception of Birkle's treatment of Nightingale's suggestion that Seacole's British Hotel establishment was a mere brothel and a den of inequity. This accusation seems in part to rest upon on the prevailing racialised and sexualised Victorian imperial discourse of supposed 'low morals' of the black female subject, and Birkle's lack of attention to this aspect of encounter is a missed opportunity. Meanwhile Seacole dabbled with and altered dominant discourses of power, to legitimise her work for the British imperial war effort. Birkle shows that Seacole defiantly affirmed her mixed-raced heritage, as the successful blending of "good Scottish blood" and a "genealogy of female entrepreneurship" when she published her lucrative memoirs in London (106).

In Black Titanic Krings provides an engaging discussion of black appropriations or transcripts of the Titanic disaster. The Titanic as a symbol of Western modernity, sophisticated technology, wealth and power, pointedly omitted people of African descent from its creation story and maiden voyage, albeit a voyage that ended tragically in disaster and major loss of life. Krings convincingly demonstrates that, in spite or perhaps because of this omission, the Titanic has nevertheless served as a versatile and serviceable figure in African American and more recently African popular cultures. These include African American popular songs, that emerged soon after the sinking of the Titanic, and more recently, in response to James Cameron's Hollywood blockbuster, contemporary Nigerian film-making, Congolese pop music, Tanzanian graphic novels and Seventh Day Adventist hymns, also from Tanzania. The varied examples provided are fascinating. However, the drawback of this essay is its brevity and unevenness. Only very limited discussion is provided on the significance of these appropriations of the Titanic disaster, which the author suggests are comments on "the social exclusion that members of the black race had to experience during the larger part of Atlantic history" (40). This seems a preliminary and overly modest conclusion. Seizing the Black Atlantic paradigm more readily would garner a larger examination of how and why black actors in different temporal and geographic spaces used the Titantic as their medium to reinsert themselves into a discourse about modernity, technology and progress on the one hand and catastrophe on the other.

The volume succeeds most for its breadth and diversity and will be of use to scholars of film, music, memory, literature and history amongst others. In places essays are overly long and verbose and could have been easily abbreviated for the benefit of reader experience. These include Wolfgang Binder's discussion of voyeuristic travel narratives of Jamaica and Erna Brober's sketch of the available archival sources on African Americans living in St Mary, Jamaica, around the time of the American Revolutionary war. However, overall the volume represents a valid contribution to the reclamation work that the Atlantic paradigm allows.