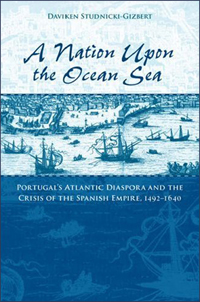 The maritime empires of early modern Europe were partly sustained by the activities of mercantile "nations." The latter - for example, the Basque, Genoese, and Huguenots -formed ethnically distinct, flexible yet cohesive networks of merchants, sailors, shopkeepers, financiers, and their families, stationed at various points throughout the Atlantic basin. Paradoxically, these diasporic constellations often operated outside of the formal institutions and controls of the states and empires whose economies they nourished.

In his impressive first book, Daviken Studnicki-Gizbert examines one such collective, the stateless "Portuguese Nation," a coalition of New Christians (also known as conversos), mostly of Judeo-Lusitanian origin, and Old Christians (Iberians of non-Jewish and non-Muslim ancestry), organized into merchant "houses." The coalition was central to the expansion and basic functioning of the Iberian empires in the 1500s and 1600s, and yet was socially stigmatized because of its real and perceived deviations from Ibero-Catholic ideals.

A Nation Upon the Ocean Sea explores how that Portuguese collective coordinated its manifold activities at a time of accelerating mercantilism and incipient capitalism in and beyond the Spanish empire. In addition, the book investigates how the Nation's economic pursuits related to other spheres of its collective life. Though it may be viewed as primarily an economic history, then, the work provides considerable sociological insights and a historical interpretation of the rise and decline of "The Portuguese [trading] Nation" from the sixteenth to the mid-seventeenth centuries.

The book discusses the Portuguese Nation principally in the context of its main theater of operations, the Spanish empire, and vis-à-vis its main client, the Habsburg crown. Studnicki-Gizbert explains that Portuguese merchants "organized the commercial infrastructure necessary for Spanish colonialism," (38-9) founding a highly decentralized web of trading networks. All the same, they were widely perceived as conspiring foreigners, opportunists, leeches and religious subversives. The author traces this phenomenon to a tension that had developed in the 1500s between the multinational foundations of burgeoning world trade on one hand, and the concurrent centralization and fiscalization of the Iberian states, and attendant theories of the prerogatives of the monarchical state, on the other.

The analysis underscores, for instance, the irony that Spain came to rely for its maritime labor on Portuguese seamen and merchants (and others), people who were engaged in the production of what Spanish imperial officials and political critics regarded as unnatural wealth, that is, material surplus created not for the purpose of serving basic human needs, but to satisfy a "quasi-libidinal urge" (33) and to ultimately subvert the ethical order of a Catholic society. Adding fuel to the fire, Luso-converso mercantile activities far outstripped the capabilities of state-based regulatory mechanisms. This tension exploded in the mid-1600s as the well-known crisis of the Spanish Empire heightened anti-converso animosities and led to the unraveling of the Portuguese trading Nation under the impact of Judeophobic persecution.

One of the book's chief contributions is its description of how Portuguese mercantile networks were formed through the movement of Portuguese subjects across the Atlantic and their settlement in dozens of closely- knit ethnic neighborhoods in various cities and ports. Mercantile "houses" arose as the families that were the nuclei of these "sojourner communities" expanded and became bound to each other through endogamous alliances, the forging of commercial and hence social relationships, the practice of associated rituals and customs of sociability, as well as the building of communal institutions - hospitals, confraternities, places of worship, and the like.

Studnicki-Gizbert shows that religion was far less important to the group as an intra-ethnic cement than interpersonal trust. That trust was not anchored in a legal-institutional system of enforcement, but in sentiment, especially in the perception of merchants' honesty, and in mutual familiarity. Patrimonial clans of the Nation were further cemented by authoritarian models of kinship and hospitality that the nationals drew from the Iberian culture they shared. Much colorful anecdotal information here, as throughout the work, derives from commercial correspondence, as well as notarial and inquisitorial records.

Of particular interest to cultural historians is a discussion of a literature of mercantilist reform that intellectuals of the Nation directed at Habsburg officials in Madrid in order to forestall persecution and pursue their commercial interests. The lobbyists argued for the "open flow of wealth" (121) and a social liberalization from which the Nation, for long tainted by the stain of an imputed Jewishness, stood to benefit. A key insight of the discussion is that New Christian writers employed both conventional, scholastic argumentation to pursue their critiques and proposals, but also went beyond it, by appealing to empirical observation, in particular to the authors' own, first-hand, practical knowledge of various markets and of the conditions under which Atlantic trade was carried out.

A Nation Upon the Ocean Sea is a multilayered and highly informative portrait of a community. The work successfully avoids essentialistic views of identity that have for long guided studies of New Christians. Studnicki-Gizbert shows how interrelated phenomena of maritime commerce and ethnicity rendered coherent a religiously diverse and labile social group. Early on and throughout the book he notes that the Nation exhibited a "composite religious culture that mixed both Jewish and Christian elements in complex ways," (11) and, as evidenced by considerable exogamy, was quite porous. Among other things, the work provides a precious sense of overall demographic dimensions that is missing from much scholarship on New Christians. For instance, there is a global estimate of the nation's membership - "twenty-thousand souls" (41) - at the time of its apogee, and an observation that "over half" (10) of it was New Christian.

Because of the different levels of analysis-cultural-intellectual, sociological, economic, political - through which its exposition courses, the work provides a pleasingly comprehensive analysis mirroring that found in the recent collection, Atlantic Diasporas. Jews, Conversos, and Crypto-Jews in the Age of Mercantilism, 1500-1800 (ed. by Richard L. Kagan / Philip D. Morgan, Baltimore, London 2009). Like the anthology, the book under review lies at the intersection of early modern Cultural Studies, Economic History, Diaspora Studies, and Atlantic Studies. In addition, it renders a sophisticated picture of communal formation and operation that complements recent, cutting-edge work on Luso-conversos.

The book's only misstep is perhaps a consequence of one of its many strengths. By avoiding the common error of assuming the centrality of religion to the cultural character of the Nation, the study goes too far in the opposite direction, doing little to illuminate the complex and diverse relationships that New Christians developed toward Judaism and Christianity. To be sure, the study is mostly about the mercantile bases of a community, not about the anthropological intricacies of its members' mentalities. Still, a major question remains largely unanswered, given the work's acknowledgment of the Nation's reliance on "symbols of common identity":(11) How did those of the Portuguese Nation relate to Judaism (real and imagined), to Catholicism, and to the Jewish ancestry with which others associated the group? To answer, in effect, that some of the nationals were Judaizers, and/or became normative Jews in exile, while others were not and did not, hardly satisfies the query. It also tends to gloss over social fissures and discoordination that did emerge within the Nation. The overall effect is an improbable picture of too-harmonious ethno-mercantile cooperation across time and space, and a slightly flat image of Iberian Judeophobia as mostly a matter of economics. Otherwise, Studnicki-Gizbert has produced an analytically superior work that is very lucid and extremely well researched.