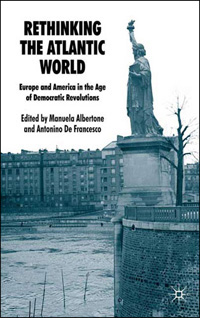 This collection of essays has an ambitious title and an even more ambitious subtitle. Both are probably not the fault of the editors but the making of the publishers. Nevertheless the label on the package does not match the contents.

The large majority of the essays in the three sections of the collection deal with French-American issues, either politics, constitutional thought or French-American intellectual concepts. The exceptions are: 1) an essay by Koen Stapelbroek on the conflict between the Dutch insistence on the right to free trade in times of war and English demands to cease trade in war-related goods in times of war; 2) Jonathan Israel's essay on "Democracy and Equality in the Radical Enlightenment" (46-60) which ranges widely over Europe in his quest for material to buttress his thesis that the impact of "radical thought" had a larger impact on Europe and especially on France than "traditional historiography" (59) makes us believe. Both are in the first section of the book. A third contribution, the last in the third section, too qualifies as an exception: Bernard Gainot's "The Republican Imagination and Race: The Case of the Haitian Revolution". It is an interesting piece that argues that color prejudice as Haiti's fundamental problem could only be "destroyed by mixing blood through the intermarriage of white men and black women" (287), or through "the establishment of the constitutional regime" as the "most essential condition for the prosperity of colonies" (290).

As is true for many collections of essays there are some articles that are interesting while others rehash old arguments or summarize what we know about a particular topic. Among the more noteworthy contributions in the second section of this collection is Biancamaria Fontana's analysis of Benjamin Constant's constitutional concepts (163-179). The author concentrates on Constant's ambiguous attitude to the constitution of Bonaparte's France. She convincingly concludes that Constant's constitutional concept foreshadowed problems and features of our present-day European Union's need to find a precarious balance between uniformity and respect for regional and local individuality. Gino Longhitano's contribution "Industry, Government and Europe: From Mercantilists to Saint-Simon" (180-200) summarizes the ideas of Saint Simon, Benjamin Constant, Augustin Thierry with a bit of Adam Smith thrown in. Their ideas, so the author argues, amounted to "a model of Utopian Capitalism" (196) which was designed to project a new Europe in which "politics was eliminated from the economy and the market" (ibid.).

The contributions in the third and last section come closest to what the title of the collection promised. However, instead of being a comparison, Sharp's article "France and the United States at the End of the Eighteenth Century" (203-218), summarizes what is known about American attitudes toward France between 1789 and 1800. The second essay in this section, Richard Whatmore's "The French and North American Revolutions in Comparative Perspective" offers a summary of how French and American thinkers and historians from Tom Paine to Joyce O. Appleby viewed French-American relations from 1789 to the American Civil War. The third essay, Antonino De Francesco's "Federalist Obesssion and Jacobin Conspiracy: France and the United States in a Time of Revolution 1789-1794" (239-253) is one of the few pieces that adopts an Atlantic approach. It discusses how between 1792 and 1794 Federalist constitutional ideas influenced the Feuillants in France. This Atlantic approach is watered down to a "perspective on" approach in the second to last article of this section by Pierre Serna on "In Search of the Atlantic Republic: 1660-1776-1799 in the Mirror" (257-275). The author argues that French journalists and writers observed and commented on American political developments more sympathetically than previous authors had suggested.

Three features make this a disappointing book: First, the articles certainly do not "rethink the Atlantic World", as the title promises but focus on one European nation, France, "beyond Atlantic history" (1). This is done not in an innovative sense as the editors suggest in their introduction. One reason for this failure seems to be that the authors are simply unfamiliar with the methodology of "Atlantic History". While I sympathize with their complaint that "studies of the Atlantic world of the eighteenth century have been rather 'Anglocentric'" (1), I find their answer disappointing. Their intention is praiseworthy "to bring our attention back to the role continental Europe played" in the Atlantic world. Yet their conceptual approach that "places the French Revolution firmly at the heart of Atlantic History" is unconvincing. They exchange an Anglocentric for a Francocentric approach. Second, most contributions use a concept of intellectual history that concentrates on the thinking of particular persons without ever asking what effects those thoughts had on society or on politics. Finally, I find articles irritating that lack a thesis as well as a summary which is true for a number of this volume's contributions.