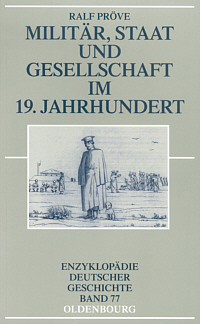 Ralf Pröve of the University of Potsdam makes a valuable contribution in a limited compass with this overview of German military history, and military history in Germany, from 1763 to 1890. Number 77 in a projected hundred-volume series of pocket Encyclopedias of German History, its hundred pages of text begin with an overview of warmaking during the period under consideration.

Pröve's first chapter explains and justifies his unconventional time frame. The era of "late enlightenment and early liberalism," from 1763 to 1850, featured a spectrum of new ideas about human nature and human society that fundamentally reshaped thinking on war and military organization. Operationally linear tactics gave way to skirmishing. Small forces of marginalized royal subjects were replaced by mass citizen armies. A long-standing gulf between societies and their military systems was superseded by growing integration - and by politicization, as liberals and conservative debated the structure and mentality of armies in the years between 1815 and 1848. Pröve's survey of the next forty years emphasizes war's nationalization and industrialization. Beginning with the political and institutional issues raised by the Roon reforms and the post-1871 extension of Prussia's military system in Germany, Pröve next addresses structural issues: internal organization, conditions of service, the nature of the officer corps, and everyday structures and routines. A brief summary of technical developments - railroads and rifles - is followed by an analysis of the military's impact on society through such institutions as schools, reservists' associations, and the system of one-year volunteers.

Chapter II addresses the basic problems and tendencies of research into military history. It begins with a useful summary of the craft's development in a German context. Pröve describes an initial "unholy alliance" between the operationally focused approach introduced during the nineteenth century by the General Staff and an academic establishment uninterested in challenging that paradigm. His assertion that a similar limited focus informed the post-1945 work of the GDR's MGI is more defensible than his similar critique of the Federal Republic's MGFA. The latter institution may not have been existentially independent, but it was far more than a mouthpiece for government-funded special interests. Pröve is on surer ground in his critique of the university system for its hostile neglect of the field until the 1990s. He does an excellent job summarizing the emergence in reunited Germany of a "new military history" that eschews operations and strategy for questions of class, race, and gender, presented in an increasingly complex (an outsider might say "arcane") methodological structure."

The next section of Chapter II surveys new developments in German military historiography in a chronological context. Among its noteworthy aspects are its presentations of the burgeoning literature of military enlightenment in pre-Jena Prussia, and of the developing consensus on Prussia's Wars of Liberation as the key event of modern German nationalism. The constitutional position of Germany's armies between 1815 and 1871 has a developed historiography; Pröve hits its highlights accurately. Dierk Walter in particular receives well deserved praise for his contextualizing of the "Roon reforms" in Prussia's general military development; the section on the War of 1870-71 highlights a growing emphasis on that war's everyday routines at the expense of campaigns and battles. The concluding section, on the military in Bismarck's system, highlights recent work emphasizing its dual roles as an instrument of national integration and of Bismarck's governance.

The chapter's third section addresses the research fields and intellectual questions currently informing scholarship in the military history of this period. Operational analysis takes a clear second place to work being done in English-speaking circles. Economic history, long a staple of German historians, lags so far behind in this context that Pröve describes the history of the armaments industry as "yet to be written." Social history stands at the head of the queue, especially in the context of work on elites. Not merely the social origins of the officers, but their socialization and their daily lives, have generated a growing body of research. Biography, long dismissed for its bourgeois approach and popular appeal, is making a comeback as well. Though investigation of the experiences of ordinary soldiers remains neglected by comparison to the officers, women's and gender history are flourishing. Current emphasis is on the military as a male socializing - and brutalizing - experience. Excluding women and reducing them to subordinate and supportive status, it simultaneously facilitated patterns of male bonding that increasingly transcended boundaries of class and caste.

Cultural history has also developed significantly in military contexts. Pröve highlights the importance of methodological developments emphasizing individual agency. An age of mass war and general conscription provided an increasing body of data on soldiers' understanding and communicating their experiences in and out of battle. Related to that subject is a proliferating literature on way s of commemorating and memorializing of war in both public and private contexts. Finally, the increasing importance of force, war, war and the military to the cultural definition of nations and state bids fair to free military history definitively from its self-imposed historic boundaries, and bring it into the intellectual mainstream.

Military technology as well is cultivating a wider dimension, incorporating social, economic, and cultural issues into its traditional focus the nuts and bolts of warmaking. The relationship of politics to military affairs, long dominated by the work of Gerhard Ritter and relatively neglected in recent yeas, offers a similar, still neglected, opportunity to expand traditional analytical frameworks. And certainly the author has earned the right to address his own specialty under a separate heading, in an excellent discussion of the impact of military institutions on the long-standing field of municipal studies. From architecture through economics to patterns of marriage, rural developments to internal security, soldiers influenced German urbanization in ways that are only now being understood and investigated.

Pröve concludes Chapter II with a brief overview of what he describes as fundamental issues of interpretation and description. Militarism and militarization, whether in political, legal, or cultural contexts, are being increasingly analyzed "from the bottom up" - as phenomena positively accepted by society rather than imposed by self-interested elites. This "synthetic militarism" in turn encourages reconsideration of total war's nature and roots, and of the underlying issue of force and power in their own context, separate from state structures.

It represents no denigration of the body of this volume to say Chapter III is the one that is most likely to prove most useful to working historians - especially non-German ones. It is a bibliography of 350 works, most published in the past twenty years, and offering an admirable overview of recent scholarship in the areas discussed in the body of the work. Its emphasis on German sources is particularly welcome in the context of a publication explosion that makes it difficult enough to keep pace with developments in one's own language. Its organization follows the text, making it user-friendly. Even a casual perusal generates a list of unfamiliar references to be acquired as quickly as possible. From first page to last, Pröve merits the gratitude of his German and foreign colleagues alike for this model version of a pocket reference.