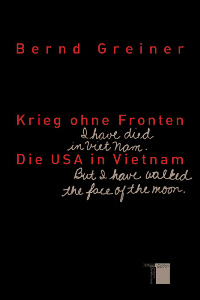 Bernd Greiner is widely acknowledged as a leading German authority on US history, especially during the Cold War. He has exhaustively, albeit selectively, mined American archival sources for what is less a history of America's Vietnam War than an analysis of the atrocities Greiner presents as the defining element of that undertaking. His approach to the war itself reflects a disappointingly conventional Euroleftist perspective, seasoned by regular flourishing of the specifically Germanic moralische Zeigefinger, and informed by a generous subtext of Schadenfreude. For Greiner the US involvement in Vietnam was a fiasco, doomed to failure from the start, undertaken in defiance of warnings from Congress, the CIA, and the best and the brightest Presidential advisors. Greiner describes "American warlords" fearing a domestic right wing, blinded by the myth of monolithic Communism and the illusion of a short war. What they found instead was a military swamp that produced a moral crisis.

Greiner speaks sarcastically of a "tonnage war," a war of attrition intended to force capitulation by a combination of unpredictable behavior and unmatched destructive power. Success was judged by bombs dropped and bodies counted. Vietnam's civilians paid the price. And if that were not enough, American ground forces rapidly descended a "slippery slope" of random killing and large-scale torture. Greiner describes "death commandos" turned loose to ravage the countryside and generals celebrating "search and destroy" operations that produced ten times as many bodies as weapons. He presents "ordinary men," front-line grunts seeking a rite of passage to a spurious manhood, routinely taking ears, scalps, and fingers as trophies from dehumanized "gooks" and "dinks." He focuses, finally, on the events of March 16, 1968, at My Lai, where an American platoon slaughtered at least 500 civilians.

Even more culpable than these deeds, from Greiner's perspective, is their systematic coverup at all levels, military and political. Worse still is the general indifference or denial with which their eventual exposure was received by the American population. Greiner cites his own research on written reactions to the court martial and conviction of Lieutenant William Calley for his role at My Lai. When every allowance is made for chain letters and similar group exercises, the overwhelming number of correspondents sympathized with Calley.

Greiner interprets this as reflecting fundamental rejection - not of the war itself, or the war's conduct, but of the fact of defeat: an example of an enduring American arrogance based on an uncritical acceptance of American exceptionalism, specifically the belief that the country's wars are always justified. That is scarcely an original position. Similarly the book's extensive archival citations do little more than flesh out lines of evidence and argument long since made familiar by American authors and scholars - working from records kept and issues raised by the very institutions and agencies Greiner denounces.

And it is here Greiner's approach is open to criticism. Like many German scholars working on non-German subjects, he concentrates so intensely on the documents that he slights their contexts. From its beginnings the Vietnam War's conduct generated moral misgivings at operational and policymaking levels. It is neither possible nor necessary to deny Greiner's evidence to suggest that it is best understood in a more fully developed matrix.

Greiner recognizes the "filth of war." He accepts that a war waged in large part by small units acting independently, like rifle squads or helicopter crews, offers disproportionate opportunities for atrocities. His direct connection between the war's fundamental injustice and the nature of its conduct, in particular the "self-radicalization" of the soldiers and junior officers, nevertheless remains questionable. Mark Moyar's 2006 Triumph Forsaken demonstrates that the Vietnam War was an ongoing, long-standing, deeply festered conflict. The US became involved in its middle stages, allied to a country fighting for its literal existence against an enemy no less determined on total victory. Brutality was the order of the day long before the Americans arrived - and long after they left as well; the Vietnamese had nothing to learn from the West in that regard. Institutionally the US military merits indictment for failing to take Vietnam seriously. In particular, the army's impatience with the demands of an asymmetric "war without fronts" is generally conceded. A heavily careerist officer corps, oriented more towards management than leadership, compounded the problem. But Lewis Sorley's A Better War (1999) makes a solid case for the army's eventual development and implementation of an effective land strategy. And just perhaps, had Western Europe, and particularly the FRG, been more willing to accept responsibility for its own defense , the US Army might not have remained so preoccupied with "fighting outnumbered and winning" in the Fulda Gap during the Vietnam years. The increasingly desperate search of successive presidential administrations for a "light at the end of the tunnel," the seemingly obsessive concern with American credibility, seem inexplicable in Vietnam's parameters. But South Vietnam was not the only partitioned country created by the Cold War whose legitimacy was denied by its other half. And throughout the Cold War, West German politicians and intellectuals regularly questioned Washington's readiness to exchange Chicago for Munich.

These alternative positions need not be accepted but cannot be dismissed. Turning to America's domestic climate, Greiner similarly overlooks the fact that for years prior to the publicizing of My Lai, an increasingly vocal antiwar movement had sought to establish ordinary soldiers as dupes, pawns, and victims. Is it so remarkable that the same line of argument would be used in defense of Calley, and of others in his position? Greiner seems, moreover, excessively credulous when presenting alleged eyewitness testimony of atrocities, or evaluating similar material offered by such groups as Vietnam Veterans Against the War. B.C Burkett's Stolen Valor (1998) is an exhaustive analysis - one among an increasing number - of hair-raising accounts from Vietnam that have turned out to be in good part constructions when not outright fabrications, developed for a wide variety of motives from the deeply idealistic to the crassly self-seeking.

In a wider sense, this book arguably belongs less to the literature on the Vietnam War than to the German academic community's current effort to demythologize the Wehrmacht by demolishing the myth of the "clean shield." Focusing on the crimes and atrocities committed and concealed under field gray is seen as a way of refocusing the past by reintegrating "ordinary" Germans into the Nazi system as proactive participants in a unique evil. Greiner takes an essentially similar approach to the US in Vietnam. In contemporary American historiography as well, the concept of a "tainted legacy" beginning with the first Europeans has made increasing headway, albeit from different parameters. In both German and American cases, however, legitimate analysis of historical experience risks distortion by exaggeration, whether it is intellectually based or agenda driven. Vietnam was a flawed war and a human tragedy - no less than that, but no more. When addressing the past - and for that matter the present - scholars and societies alike do well to comprehend the essential difference between recrimination and understanding.