Robert M. Citino: The German Way of War. From the Thirty Years War to the Third Reich, Lawrence, KS: University Press of Kansas 2005 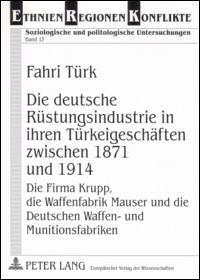 This well documented work originated as a dissertation submitted to the Free University of Berlin. While offering no striking reinterpretations, Tuerk comprehensively addresses the role of the German armaments industry in influencing relations between the Second Reich and the Ottoman Empire from the Franco-German War to 1914. Turkey sought to modernize its armed forces without falling completely under Western influence. Germany seemed the most favourable prospect for both techniques and technology.

Not only had the German army taken pride of place on the continent after 1871. Among the great powers Germany seemed the least direct threat to Ottoman interests. German arms manufacturers for their part were anxious to increase their overseas markets, and that desire was generally underwritten by the German government. Tuerk stress as well the influence of German Orientalism, and its advocacy of German settlement in what seemed to Journalists and professors the undeveloped frontier region of Anatolia. The Ottoman Empire, particularly after its military and political defeats in the Russo-Turkish War and at the subsequent Congress of Berlin, appeared a customer in no position to haggle. It seemed a commercial match if not made in heaven, then certainly reflecting a congruence of needs, wishes, and interests.

Tuerk next moves to the overhauling of the Ottoman army by German officers, particularly Colmar Freiherr von der Goltz, head of the military mission from 1883 to 1895. Influential at the Sultan's court, his advocacy for German weapons was a major factor in the increasing orders placed with firms like Mauser and Krupp. The German embassy helped as well. Turkish statesmen and Turkish officers alike supported the German connection-as Tuerk shows, far more from conviction than from any under-the-table financial encouragement. Their advocacy was at the expense of a Turkish arms industry with a long and successful history, which was anxious to reach equality with Europe for patriotic as well as commercial reasons. But with Sultan Abdul Hamid transferring his substantial private savings from France to the German Reichsbank, the future pattern was clear.

For the German armaments industry, foreign orders meant increased political influence as well as additional profit. Competition for the large-scale Ottoman contracts was intense, eve in the context of a developing cartel system designed to discourage mutual throat-cutting. In particular the firms of Ludwig Ehrhard and Friedrich Krupp vied for artillery orders. Krupp proved more successful, increasingly developing a strong connection with the Ottoman navy as well. The consistent improvement in the details of weapons development guaranteed a steady flow of funds in one direction, hardware in the other-and an increasing level of corruption.

The absence of a European-style nobility in the Ottoman Empire meant in practice that offices were bestowed at the will-or the whim-of superiors. An increasingly debilitated economy meant salaries were usually well in arrears. In those contexts almost all officials depended on "gifts" understood not as bribery in the Western sense, but as a necessary facilitator of business negotiations. German rifles and cannon were reliable and simple to operate. Their high quality, demonstrated in the army's success in the Cretan uprising of 1895, meant that the treasure suffered ore than the soldiers from this exchange of favours. It also gave the Germans an initial edge over the increasing efforts of French and British firms to develop Turkish connections. The Young Turk revolution of 1908 brought a degree of change. The new regime was concerned with balancing books too long neglected. It also sought to break what seemed an unhealthy dependancy on a single major arms supplier. Schneider-Creusot was more successful in the Balkan states, but Vickers-Armstrong won an increasing number of naval contracts in Constantinople.

German influence nevertheless persisted. After the war German firms opened three weapons and two powder factories in the new Turkish Republic. After World War II, in the NATO era, the Federal Republic continued to be a major supplier of arms to Turkey. The use of those weapons against the Kurds was a cause of tension between Bonn and Ankara at the century's turn - a far cry from earlier attitudes, but an indicator of an enduring military-cultural connection.