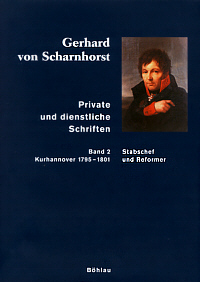 This second of five projected volumes of the Scharnhorst Nachlass is an example of German scholarship at its best. The documents are impeccably presented, painstakingly edited, and comprehensively annotated. They offer a definitive insight into Scharnhorst's emergence as a leading German military theorist during his final years in Hanoverian service, before transferring to the Prussian army in 1801.

The work is divided into two major sections. The first covers his service from 1795 to 1798 on the staff of the Observation Corps; the second addresses his efforts to reform the Hannoverian army at the turn of the century. The documents highlight Scharnhorst's understanding of detail as well as his understanding of the wider military issues generated by the French Revolution. His analyses of potential operational positions in the Electorate reflected fingertip mastery of its military geography. He recommended the introduction of annual maneuvers in the style of Frederick the Great, reconfigured to Hannoverian specifics. He addressed such issues as military mapmaking, reform of the artillery, and the merits of organizing armies into combined-arms divisions along French lines. He described how to integrate skirmishing, a central aspect of the French way of war, into the structure of Hannover's relatively small professional army.

In these and similar cases Scharnhorst approached subjects comprehensively. He combined recommendations for such minor problems as the proper outfitting of a cannon (down to the grease bucket!); with discussions of how such proposed innovations as sharpshooters could be integrated into existing drill and tactics; with discussions of how the changes would improve the army's military effectiveness.

Suggestive of Scharnhorst's later career in Prussia was his commitment to building on existing institutions, projecting change as a gradual prospect implemented from within, by co-opting adherents of the old ways as opposed to confronting them. He justified the introduction of horse artillery on the French model in part by explaining how useful the horses would be as well to the drill of the heavy batteries. When he discussed the importance of initiative and flexibility in higher officers, he acknowledged the likely persistence of seniority as the normal principle of promotion, and discussed possible alternatives within the system.

Scharnhorst's work in these years was in many respects a miniaturized forerunner of his innovations in Prussia after 1807. Despite his growing influence, however, his prospects in Hannover were significantly limited. The Electorate's domestic politics, for example, kept him from bridging the gap that existed between the first-line professional army and the militia that was its backup - a dichotomy he subsequently took pains to overcome in organizing the Prussian Landwehr. Hannover's Estates kept such tight control of the purse strings that even in the face of an obviously developing French threat, it became necessary to reduce the army's size. Most of the changes Scharnhorst was able to introduce involved relatively minor details of organization and tactics.

It was scarcely surprising that he sought wider opportunities. Transferring from one army to another was a common practice in eighteenth-century Germany; transferring from a regional power like Hannover to a great power like Prussia or Austria had for a professional soldier the same cachet as a contemporary footballer's moving from a local Verein to the Bundesliga. As early as the summer of 1797 Scharnhorst was negotiating the move, which foundered temporarily on his attachment to Hannover. Nor, at this stage, did a Prussian army still convinced of its own superiority at all levels of war offer promising prospects for an officer who increasingly perceived himself as a reformer in the broadest and the truest senses of the word.

The high quality of the main text is enhanced by an appendix incorporating brief biographies of Scharnhorst's principal associates; and by a glossary of contemporary military and civilian specialist terms invaluable for clarifying frequently obscure technical jargon. This is a work for specialists. General readers will become lost almost immediately in the thickets of detail. But specialists in the wars of the French Revolution and their impact across the Rhine will find the book is invaluable even at the price.