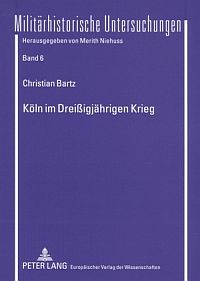 The imperial city of Cologne occupied an important place in the economic, political and religious life of the Lower Rhine during the seventeenth century. It was not only the largest city in the region, but also one of the most populous and prosperous in the Empire. This attracted the attention of the belligerents during the Thirty Years War, placing the city in a difficult position. As both a bastion of Catholicism and immediately subject to the emperor, the city was bound by confessional and political ties to the Habsburgs who naturally expected it to support their wars, both in the Empire and against the rebel Dutch Republic. The city was also surrounded by the electorate of Cologne, a leading member of the Catholic League and the director of that organisation's political and military affairs in north-west Germany. Yet, the city's economic survival depended on remaining open as a regional market centre and place of exchange, especially for goods travelling between Germany and the Netherlands. Christian Bartz's published dissertation traces how the city council struggled to balance these pressures between the outbreak of the war in 1618 and the Peace of Prague in 1635. After outlining the civic constitution, Bartz examines the council's deliberations in four main areas.

The first and most substantial covers military and security policy. The council responded to the spread of war to the Lower Rhine in 1620 by augmenting its professional soldiers and stock-piling modern weapons. The garrison was reduced as the danger receded after 1622 and little was done to strengthen the city fortifications. The city remained officially neutral, refraining from joining the League or openly favouring any of the belligerents. All powers were free to recruit soldiers within the city, purchase arms and supplies and to cross the river Rhine, provided they respected Cologne's status as an imperial city. This entailed its freedom to follow imperial directives, including paying official war taxes to the emperor and retaining Cologne's solidly Catholic character. The Dutch offensive of 1629 posed a real danger, because it appeared that the war in the Netherlands would merge with that in Germany as the emperor offered support to the hard-pressed Spanish. Tension mounted with the Swedish drive down the Main during the autumn of 1631, as numerous Catholic princes fled to Cologne.

The council at last took steps to repair and extend its defences, especially those of Deutz that formed the bridgehead on the east bank. The Swedes cited this as evidence that the city had abandoned its professed neutrality and attacked Deutz in December 1632. The incident prompted a significant shift in Cologne's policy, as the Swedes were now regarded as enemies and were refused all further assistance. Part of the garrison was detached to reinforce electoral Cologne garrisons nearby in an attempt to keep the war at bay. One contingent was sent into the field to reinforce imperial and League forces in Westphalia, while others were discharged directly into imperial regiments. Meanwhile, the city received a share of the subsidies paid by Spain to support the imperial war effort.

The political consequences of these developments are covered in the second section that examines relations with each of the major powers in turn. The council's overriding aim was the 'conservation' of Cologne, meaning preserving its physical existence, defending its political status as an imperial city, and maintaining internal order. The object of neutrality was to prevent violence reaching the city. This dictated conciliatory gestures to the various belligerents, provided they left the city alone. Commercial reasons were important in the desire to mollify the Dutch, but it has to be remembered that their military power represented a real threat to the city. Negotiations with the Swedes reveal, however, that conciliation had its limits. Gustavus Adolphus wanted to make his recognition of Cologne's neutrality dependent on major interference in its internal affairs, such as placing a Swedish observer in council meetings and permitting Protestant worship. These demands were refused, though the Swedes were still permitted to purchase supplies and recruit until their attack on Deutz. French offers of 'protection', transmitted by the elector of Trier after 1632, were rejected as threatening the city's distinctive status. Cologne's essentially pro-Catholic orientation is further demonstrated in the discussion of its dealings with Spain and the papacy. Relations with the emperor are treated in a separate section, providing further evidence that the city complied with his demands, provided these did not endanger the neutrality it professed to the other belligerents. Again, the attack on Deutz appears as a turning point, after which the council became more openly pro-imperial, though still stopped short of unqualified support. The final section covers the council's commercial policy that was directed primarily at preserving the city's status as an attractive market centre and ensuring the continued flow of money and food to sustain its inhabitants.

The text conveys the prevailing sense of anxiety felt in many communities during the war. The paramount concern was to keep the war at bay, to prevent physical harm and loss of life, and to limit any disruption to commerce and prosperity. The council remained firmly committed to the Empire and Catholicism, but largely because both were regarded as the basis for the city's autonomy, status and good order. These conclusions are important and this is certainly the most complete study of Cologne's policy during the war. Nonetheless, the reader is left with the sense that the author has not made the most of his rich and interesting material. The detail is always set in its wider context, but this context is largely chronological, not analytical. The thematic organisation does not extend much below the level of the book's main sections, each of which presents the material for that theme in strictly date order. At times the text is little more than a précis of the council minutes that form the principal primary evidence. This leads to some unnecessary repetition, such as coverage of the refusal to admit a Spanish garrison in 1631 (73, 148-9, 161-2). The desire to recount the detail at times obscures other, potentially more interesting questions.

There is little sense of what those outside the council chamber thought about the city's policy, or even if individual councillors dissented from majority decisions. Cologne clearly served as a valuable conduit for arms, munitions and supplies to the major armies, but there is no attempt to evaluate how important this was to the different belligerents, or how it was handled on a practical basis through the city's merchants, artisans, and haulage contractors. Bartz offers intriguing information about the emperor's choice of the Questenberg brothers, native sons, as intermediaries in his dealings with the council. It would have been worth extending this by investigating the other agents and representatives of the different armies and powers. It is particularly disappointing that so little is said about relations with electoral Cologne and the other Catholic rulers who sought refuge in the city. They naturally appear regularly, urging the city to do more for the imperial cause, but surely relations were more complex than this. Much remains to be done and it would be helpful if future studies attempted comparative analysis, perhaps with Hamburg or Frankfurt, for which much of the groundwork has already been published.