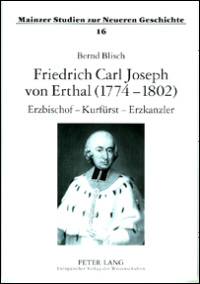 Historians have long recognised the pivotal role played by the elector of Mainz in the politics of the old Reich. As Arch-Chancellor, the elector controlled the formal channels of communication between the emperor and the 'Reichsstände' as embodied in the 'Reichstag'. He was also the senior elector and charged with overseeing imperial elections. Finally, he was the premier German Catholic churchman and so head of the 'Reichskirche', that mass of ecclesiastical territories that was the principal holy Roman pillar of the imperial constitution. These functions and associated status gave the elector influence far above what his relatively small and exposed possessions would otherwise warrant. This influence persisted even as the logic of territorialisation enhanced the significance of fiscal and military power from the later seventeenth century. Thus, the basic outlines of the electorate's imperial policy (Reichspolitik) were already firmly established by the 1690s, building on trends already detectable before. The elector was determined to defend the Reich's traditional hierarchical constitution that sanctioned both his political influence and his 'electoral pre-eminence' over the other princes, many of whom were better armed and enjoyed more powerful international backing. As the natural guarantor of this hierarchical order, the emperor could count on Mainz's support provided he did not allow his private dynastic interest to affect his defence of the status quo. Whilst concerned to defend Catholicism and the special status of the 'Reichskirche', Mainz had long refrained from confrontational confessional policies within the Reich, recognising already before 1618 that many moderate Protestant rulers were equally concerned to preserve the constitution on which their autonomy ultimately also rested.

Given that these aspects have already been extensively researched, one might ask what can be gained from further detailed study of the electorate's role in imperial politics. While Bernd Blisch's published dissertation does little to change the overall interpretation of Mainz's place within the Reich, he does provide considerably more information on its defence of the imperial constitution as it came under the twin pressures of French revolutionary aggression and irresponsible Austro-Prussian rivalry in the 1790s. His chosen format is a 'politische Biographie' (20), exploring his subject through the aims and policies of Friedrich Carl Joseph von Erthal, the last but one archbishop-elector of Mainz whose death in 1802 effectively coincided with the end of the old order, both for the 'Reichskirche', and more generally for the Reich. Like many biographers, Blisch argues his chosen subject has been unjustly maligned and the overall tone is one of rehabilitation. Probably fairly, Erthal emerges as a man with rather more vision than previous historians have credited him with, though overall Blisch does not go much beyond Tim Blanning's characterisation of the elector as a 'tactical conservative'. [1]

Rehabilitation of the elector is linked to the thesis that his internal reforms were directly related to his imperial policy, since both were intended to strengthen Mainz's political role at a time when the growth of Austria and Prussia as great powers placed the imperial constitution under growing strain. Again, this interpretation is broadly in line with that presented by Blanning and others who have written about reform in the ecclesiastical territories during the later eighteenth century. Blisch is able to add some detail, for instance the connection between the reform of Mainz University and the demand for publicists and diplomats to promote the elector's wider political programme. However, his discussion of the internal reforms largely syntheses existing secondary literature and does not engage with the debate surrounding the concept of enlightened absolutism. His argument that Mainz was intended to serve as a model for wider reform of the imperial constitution would have been worth pursing further. For example, Maiken Umbach has suggested that Anhalt-Dessau and other minor secular territories intended internal reform and even palace garden design to have a similar purpose. [2] Given the collaboration of such princes with Mainz in the 'Fürstenbund', a comparison would have been helpful. While Blisch offers some useful comments about the potential contradictions between enlightened reform and the established social, religious and legal order the elector was trying to strengthen, it would also be worth stressing that the federalist tendencies present in the 'Fürstenbund' were also corrosive of the traditional hierarchical imperial constitution.

The author has much more substance to offer when he turns to Erthal's involvement in imperial politics after 1790. This forms the main part of the book and is supported by the bulk of the detailed archival work. His main argument is that Erthal's aims remained consistent throughout his seemingly erratic vacillation between Austria and Prussia between 1774 and 1802. Each change of alliance was motivated by the desire to support whichever of the two powers seemed more dedicated to preserving the established constitution at any given moment. The basic ground has been sketched before as part of Karl Härter's magisterial study of the 'Reichstag' between 1789 and 1806. [3] Blisch confirms Härter's conclusion that Austro-Prussian collaboration was even more dangerous than rivalry, since the collusion of both powers was at the Reich's expense and robbed lesser territories like Mainz of any chance of securing their objectives through established institutions. He does add considerable detail to this, modifying, with good grounds, Härter's interpretation of Mainz's peace initiative in 1794. Rather than facilitating the Peace of Basel, this was intended to forestall a separate peace by either Austria or Prussia with revolutionary France by securing a comprehensive settlement on behalf of the entire Reich. Mainz's involvement in the Rastatt Congress also emerges more clearly as an attempt to salvage as much of the old order as possible through a general settlement with France. Here, Erthal was already moving towards the controversial policies pursued by Carl von Dalberg, then his coadjutor, and later his successor. Blisch suggests, however (267 f.) that Erthal actually manipulated Dalberg whom the Austrians then saw as a firm opponent of secularisation by sending him as representative to Vienna whilst using the more pragmatic Albini to negotiate with the French. Finally, Blisch highlights the significance of the British subsidies in 1800/01 that won Mainz some political room to manoeuvre, as well as preventing the French from overrunning its remaining territory. However, it is only at this point that the reader gains any insight into the connection between war and diplomacy as far as it affected the electorate, since the earlier discussion of Erthal's diplomacy is largely detached from any analysis of the military and fiscal basis of his modest influence.

This is not necessarily a problem, given that the author rests his thesis on the paradigm shift identified by his supervisor, Peter Claus Hartmann, who suggests a transformation of political culture from 'Recht vor Macht' to 'Macht vor Recht'. [4] As a general label for the changes between 1740 and 1806, this seems very appropriate, but unfortunately, as in the discussion of enlightened reform, Blisch does not explore the implications of this concept, or refine what it might mean in terms of behaviour at different levels of interaction, say between ruler and subject as opposed to international relations. There is a danger, as with much current writing on the Reich, of seeing things in the minor territories through rose-tinted glasses, while Austria and Prussia are placed on a par with the revolutionaries' disrespect for established rights. Blisch is far too careful to fall into this trap, but it would have helped his discussion if he had been more prepared to discuss these concepts more fully.