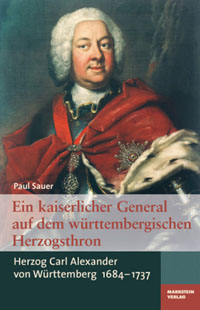 Carl Alexander ruled Württemberg for only three and a half years between October 1733 and March 1737, yet he occupies a controversial place in the duchy's history as its first Catholic duke. His sudden death amid a hectic military and civil reform programme sparked rumours that he had been poisoned by the duchy's Estates, or even struck down by divine intervention to save the Lutheran faith. As a member of the junior Winnenthal line, his accession had seemed unlikely for most of his life until the ruling Lutheran line began to fail with the deaths of its three male representatives in succession after 1728. Rather than preparing him for rule, his father had paved the way for him to enter Habsburg service where he rose to the ranks of field marshal and governor of Serbia. His conversion in 1712, whilst accompanied by a genuine embrace of baroque Catholicism, was also calculated to advance this career.

Many important historical trends are exemplified by Carl Alexander's life story. His character as a junior prince with relatively poor prospects, few resources but considerable pride and ambition, typifies the situation amongst the numerous minor dynasties in the Holy Roman Empire. The ability of the Habsburgs to draw such princes into their clientele promoted their recovery of influence in the territories of the empire after the Thirty Years War and assisted the extension of their own lands in the long wars against France and the Ottoman Empire.

Unfortunately, the first full-length biography of Carl Alexander does not match its subject's potential. Paul Sauer has already published biographies of three other Württemberg rulers, as well as numerous works on the duchy's history. His new work follows a conventional approach, tracing his subject's life in broadly chronological order with more thematic treatment of specific issues as they arise. He confirms the contemporary verdict that the duke was personally brave, but lacked the strategic insight or organisational skills necessary for a successful senior commander. His promotion in Habsburg service owed much to his personal friendship with Prince Eugene of Savoy; a factor that is mentioned but not investigated to see what it might tell us about the nature of patronage in the Habsburg monarchy.

The rest of the work reflects the sources on which it is based. Sauer has used the personal papers of the duke, his wife and parents that form part of the G-Bestände in the Hauptstaatsarchiv Stuttgart. These generally contain material relating to the financial circumstances of each member of the ruling house, their birth, marriage and deaths, official titles and honours and a limited selection of personal correspondence. Sauer weaves this material into his lucid narrative, but largely without comment or comparison with the situation in other dynasties. Rather more serious is his reliance on a relatively narrow range of often elderly secondary works. The discussion of Carl Alexander's governorship of Serbia 1719-33 relies exclusively on Official Langer's account from 1889, while Hermann Tüchle's 1937 study provides the basis for most of Sauer's assessment of Carl Alexander's relationship to Catholicism.

The problems are most apparent in the discussion of Carl Alexander's reign as duke that forms the second half of the book. Sauer's interpretation is essentially that advanced by Walter Grube in the 1950s, arguing that Carl Alexander's predecessor, Eberhard Ludwig (1676-1733), had established absolute rule by compelling the Estates to grant permanent military taxes in 1724. Carl Alexander curried favour with the duchy's traditional elite, the Ehrbarkeit, by restoring Stuttgart as the duchy's capital on his accession and expelling the detested clique around his predecessor's mistress, Christina Wilhelmina von Grävenitz. Otherwise, his rule represented a continuation of previous measures in a more extreme form as the duke increased the army and introduced new taxes. Many of the latter are associated with his personal financial advisor, Joseph Süß Oppenheimer, whom Sauer places at the centre of the reform measures.

More recent research indicates a very different situation. Ducal authority in fact declined after 1724 as the impending extinction of the current ruling line allowed the Estates to return to the previous system of renegotiating taxes on a short term basis, while the Grävenitz clique fought amongst themselves, or sought external support to secure their position. [1] Carl Alexander's purge of the remaining Grävenitz party was indeed calculated to win support amongst his new subjects, as were his repeated guarantees for the duchy's Lutheran faith. Sauer is also correct in stressing the mercantilist character of many of his domestic fiscal and economic measures. However, the major reforms were administrative and represented a sustained assault on the Ehrbarkeit's grip on the duchy's resources. Accustomed to relatively lax enforcement of ducal edicts, local elites now found their control of local government challenged by a systematic overhaul of the administration of the ducal domains and the assets of the Lutheran state church. Together with new customs regulations, these measures doubled the revenue of the two main treasuries under ducal control and were far more significant than any of the fiscal innovations associated with Süß. [2]

The reforms were intended to sustain an enlarged army, because, contrary to Sauer (269) the Austrian subsidies were not 'lucrative' but fell into considerable arrears. The military expansion was part of Carl Alexander's efforts to win concessions from the Habsburgs in return for his support in the War of the Polish Succession and the subsequent Turkish War. Sauer follows the traditional interpretation that the duke's alliance with the emperor in November 1733 derived from his imperial patriotism and loyalty to the Habsburgs. In fact, the treaty had been actively sought by Eberhard Ludwig since 1730 and was based on existing drafts. Far from representing a diplomatic triumph, the final treaty failed to include any of the political concessions sought by Württemberg prior to 1733. [3]

Sauer is surely right in endorsing Tüchle's assessment that Carl Alexander was not plotting a Catholic coup on the eve of his death, but his account of the events thereafter needs considerable revision. The new Protestant regent (Herzog Administrator), Carl Rudolph von Württemberg-Neuenstadt, was not in fact the leader of the coup that overturned Carl Alexander's will in the week after his death. The prime movers were a group of disaffected current and former ducal officials who conspired with a section of the Estates' leadership and some Protestant officers. The officials swiftly took charge, seizing control of the privy council which resumed its former place at the head of the administration. The duke's widow, Maria Augusta, was initially sidelined but staged a remarkable come-back, outwitting both the Estates and, for a time, the councillors. [4]

It is unfortunate that the relatively narrow source base has prevented Sauer from doing justice to his subject in this otherwise nicely-produced and well-illustrated book.