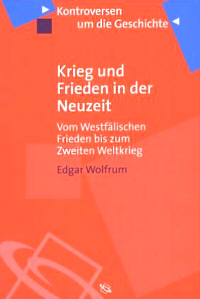 The series "Kontroversen um die Geschichte" is intended to introduce students to current debates and concepts in history. Edgar Wolfrum's new volume tackles the problem of war and peace across the three centuries after 1648 in seven thematic chapters, supported by a bibliography of 471 titles. In keeping with other series of this type, the literature is organised by chapter, but numbered consecutively for ease of identification in the text. Discussion concentrates on summarising the key arguments and highlighting areas of continuing controversy.

The first chapter traces the theory of war and peace from Plato to NATO, by way of the early Christian theologians and key thinkers like Hobbes, Rousseau and Clausewitz. The reader is introduced to the key elements of western just war theory and how these have been reworked in the light of changing political and military circumstances. There is some engagement with the 'peace and conflict studies' literature, indicating the more recent concern to find the basis of peace, rather than the causes of war. War is defined by its scale and level of organisation, distinguishing it from other forms of violence. However, as Wolfrum points out, the precise character of this distinction is far from clear in much of the current literature that lacks a commonly accepted definition of violence ('Gewalt').

The development of military history as a sub-discipline is considered in the second chapter that concentrates primarily on the German experience. The reader is given a well-informed introduction to current topics, including war and memory, war and gender, the experience of conflict and military history 'from below'. However, the role of French and English-language work in stimulating much of this research is rather downplayed. There is enough here to guide the uninitiated into this topic, but it is a less complete or rounded introduction to military history than Jutta Nowosadtko's larger book on the subject. [1]

The third chapter on the early modern 'invention' of peace is primarily concerned with the historical importance of the Westphalian Settlement and the later philosophies of Kant. Wolfrum is fully aware of the difficulties inherent in using 1648 as a turning point in international relations, but nonetheless justifies this on three counts. First, it represents the birth of the sovereign states system. Second, it ended confessional strife within the Reich, whilst, thirdly, consolidating the imperial constitution as a framework for peace in central Europe. The latter two points provide the cue for a brief discussion on the historical reception of the old Reich and its current positive image as a possible forerunner of modern European harmony. While useful, the discussion appears distorted by the recent flood of publications celebrating the 350 anniversary of the Peace of Westphalia. It is also questionable whether war, rather than peace, was invariably seen as the norm for human relations prior to 1648. Peace has not been a fixed, transcendental concept in human thought as the book's first chapter already makes clear. And rather than being invented after 1648, peace was simply being defined and discussed in new ways.

Chapter four examines the period 1789-1815 as a turning point in war and international relations, stressing the role ascribed to nationalism and the French Revolution in the general literature. The War of Liberation 1813-15 and Prussia's military reforms receive considerable attention, as does the recent discussion of the period's darker side in the Romantic celebration of war's 'liberating' potential for the human spirit. The discussion of war and the state in chapter five stresses the ambivalent relationship between military and political change and gives fairly even coverage across Europe for the period after 1648. The next chapter returns more exclusively to the German experience with an examination of the literature on military-civil relations. The controversy surrounding the definition of both 'militarism' and 'militarisation' is linked to the debate on the German 'Sonderweg', or supposedly peculiar political development. The chapter concludes by examining the weaknesses of the German peace movement in comparison to that elsewhere.

The final chapter charts the rise of 'total war' from the American Civil War to World War II. While the problems of definition are noted, that which is offered is rather unsatisfactory in that it relates total war to industrialisation and modernity. While this is the orthodox view, it implies a false progress of destruction by which modern wars are automatically more ferocious and costly than those of earlier epochs. While the destructive potential of modern weaponry is undeniably greater, it would be wrong to measure the totality of war simply in terms of killing potential and the proportion of a population under arms. The rest of the chapter deals with key debates surrounding the two world wars, such as the Fritz Fischer controversy and the recent discussion of the 'Wehrmacht' and war crimes. The conclusion offers some thoughts on peace and conflict in the later twentieth century.

Summarising such a vast body of literature is no easy task. Wolfrum remains lucid and clear throughout, presenting his selected authors' views fairly, whilst offering his own informed commentary. Pressure of space inevitably mean some areas receive short shrift. Whilst some English and French-speaking authors are included, discussion concentrates primarily on the German literature. The German experience correspondingly takes centre stage. Whilst this is not too serious given the book's likely target audience of German university students, it does reinforce the already Euro-centric focus in the discussion. There is little coverage of war and imperialism, and beyond a brief mention in connection with the debate on total war other aspects of the global context are unfortunately absent.