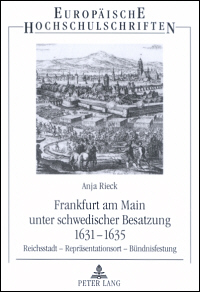 Sweden's active intervention into the Thirty Years War in 1630 placed the German Protestant territories in a dilemma between remaining loyal to an increasingly oppressive Catholic emperor, or joining a foreign invader. It was a choice few wanted to make, as either response involved abandoning a previously largely passive stance and instead placing precious political privileges at risk. Neutrality was not an option, particularly once Sweden's victory at Breitenfeld in September 1631 enabled King Gustavus Adolphus to advance deeper into western, central and southern Germany.

In her published dissertation, Anja Rieck explores this dilemma from the perspective of the Imperial City of Frankfurt that was forced to join the Swedes in November 1631 and was then occupied by them until after the Peace of Prague in 1635. The work is split into four parts, with the first, and in many ways the best, examining how and why the city chose to let the Swedes into its walls. The most interesting point to emerge from Rieck's careful examination of the negotiations between the city council and the approaching Swedes is that both sides colluded in dissimulating the true character of their arrangement. The city was very reluctant to side openly with the invaders, as this would entail a public break with its overlord, the emperor, who might annul its privileges, such as its vital trade fair rights. Moreover, the council had little desire to admit a garrison over which it would have no control and would very likely prove a constant source of friction with the inhabitants. For their part, the Swedes did not want to appear the aggressors by taking by force one of the most prominent Protestant cities of the Empire. The councillors managed to almost square the circle, by negotiating an agreement that allowed the Swedes to place a garrison in Sachsenhausen and to have free access through Frankfurt, whilst preserving the city's autonomy within the Empire. While the Swedes depicted this as an alliance, the city implied to the emperor that it had been 'captured' and so escaped largely without sanction. King Gustavus Adolphus then made a much publicised formal entry into the city on 17 November. Rieck examines this as an exercise in the representation of power, and asks what it might tell us about the thorny question of the king's ultimate intentions. Unfortunately, her answers do not go far beyond those of others who have tackled this issue before. Perhaps given the character of her sources, she stresses the economic motives in Swedish imperialism, arguing that Gustavus Adolphus wanted to seize control of the existing Central European trade network and redirect it for Sweden's benefit.

The question of Swedish goals continues into the second part of the book that deals with the city's relations to its new ally after the king's death in 1632. This relationship was put on a new footing with the formation of the League of Heilbronn, in which Frankfurt played an important role as the seat of the new organisation's permanent governing council and the venue for its two congresses. Some new material is provided on the internal workings of the League, particularly its magazine system intended to support the common Swedish-Protestant German army in which Frankfurt was expected to make good any shortfall in supplies. There is also some additional detail on the fierce fighting between the city's own troops and the Swedish garrison following the Peace of Prague as the council sought to rejoin the imperial camp.

The third section deals with the economic consequences of the Swedish occupation, including Frankfurt's importance to Sweden's attempt to seize control of the postal network within the Empire. Rieck discusses the relationship between the city and the garrison, as well as its own civic guard. The final part uses the currently fashionable paradigm of 'experience' (Erfahrung) to examine the psychological as well as social dimension of the occupation. A number of diaries are examined along with contemporary paintings, engravings and literature. This section also deals with the rumours that the Jesuits planned to assassinate Gustavus Adolphus during his stay in the city.

The loss of Frankfurt's military archive has clearly imposed limitations on what the author could achieve. She has sought out considerable material in Nürnberg, Stockholm and Vienna to compensate, but has often been forced to rely on older, often antiquarian studies. Some passages are descriptive rather than analytical, notably the section on military-civil relations which could have benefited from being related to recent debates in this field. Likewise, the discussion of the economic impact could have provided an opportunity to comment on the wider debate on the 'decline' of German towns during the War. Rieck does compare Frankfurt's experience with that of nearby Mainz that became Sweden's main political and military base in the 1630s. However, it would have been interesting to know what parallels there are between Frankfurt and other cities that played important roles during Sweden's intervention, such as Erfurt and Nürnberg. The author has also been badly let down by her publisher. While Peter Lang have at least allowed the inclusion of some useful illustrations, something has gone very wrong with the typesetting as the right-hand margin justification appears to have separated many words into isolated groups of letters throughout the book.