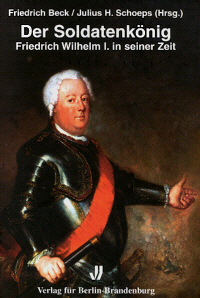 The 300th anniversary of the Prussian royal crown in 2001 prompted a modest 'Preußenwelle' of new publications, exhibitions and other commemorative reflections of the Hohenzollern monarchy. In contrast to the earlier 'wave' around two decades ago that focussed more closely on Frederick II and later Prussian history, this one has been more concerned with the earlier Hohenzollerns. The range of themes is also somewhat broader and there has been a greater effort to place Prussia in comparative European context. Only some of these concerns are reflected in the collection of papers edited by Friedrich Beck and Julius Schoeps that derive from a conference held in Schloß Königs Wusterhausen in 2000. The choice of venue was deliberate, both given its close association with Friedrich Wilhelm I (1713-40) and to mark the reopening of the palace after a lengthy renovation. The papers fall roughly into four categories, examining political, social, and cultural aspects, as well as Friedrich Wilhelm's historical and literary image. While some contributions have clearly been reworked, most retain the character of conference papers. They all have something of interest, but most are pitched at the level of general introductions or overviews of their chosen subject, rather than new research.

Gerd Heinrich opens the volume with a survey of the debate on Prussian absolutism that stops short of engaging with the recent contention that the term is simply a 'myth' (the relevant literature is simply tacked on as a final footnote). Hans J. Hillerbrand offers a succinct overview of Friedrich Wilhelm's ambiguous relations with the Pietist movement, arguing that his genuine Christian conviction did not prevent his assertion of state authority over the church. The Pietist contribution to the Hohenzollern ethos is presented as a Prussian 'Sonderweg' with little attempt to compare it to the impact of Protestant fundamentalism elsewhere, such as Bayreuth and Erlangen. Peter-Michael Hahn challenges the cliché of an extravagant Friedrich III/I (1688-1713) followed by his parsimonious and philistine son. While there was a change in style, there was no abrupt break with the past after 1713 as Friedrich Wilhelm scaled down the Prussian court and concentrated on fewer areas of activity. As he has argued elsewhere, Hahn maintains that the military activity in Potsdam and Berlin must be seen as an extension of this courtly display, rather than a substitute for it.

Frank Göse opens the section on social issues by surveying crown-noble relations under Friedrich Wilhelm, drawing on his extensive work in this area, but offering rather more in the way of new material than some of the other contributors. He emphasises what is in fact one of the major themes of the book that the popular image of the king as a brutal despot obscures a rather more subtle character. His drive to allodification in 1717 prompted a storm of protest not matched until that surrounding the agrarian reforms of 1807. Nonetheless, the fundamental changes in crown-noble relations occurred much earlier in the 1640s under his namesake, the Great Elector. Julius H. Schoeps also argues for relative continuity in Friedrich Wilhelm's policy towards the Jews in his contribution that draws heavily on Selma Stern's larger study from 1962. Erika Herzfeld summarises the findings from her 1994 monograph on Prussian manufactures, arguing that, despite the heavy orientation towards military production, Hohenzollern mercantilism nonetheless helped pave the way for capitalist industrialisation. Sitting rather oddly in the section on society, Jürgen Angelow's chapter on the Prussian army is the only one to address directly Friedrich Wilhelm's epitaph as 'Soldier King', arguing that this derives from the progressive 'internal militarisation' of Prusso-German society and its self-justification through the invention of tradition.

Three papers examine the king's relationship to the fine arts and architecture. Helmut Börsch-Supan's general survey reinforces Hahn's findings on the court, indicating that the significant reduction in patronage after 1713 represented a concentration on a few chosen fields rather than a complete end to artistic sponsorship and collecting. Appropriately, given the venue, Claudia Sommer's and Gerd Bartoschek's two papers focus on the history of Schloß Wusterhausen and its art collections, offering well-illustrated, detailed discussions.

The historical and popular reception of the king is purportedly the subject of two final papers. Klaus Malettke's substantial piece actually examines the respective views of France and Frederick Wilhelm of each other between 1713 and 1723, drawing on his own work on Franco-Prussian relations, as well as that of his doctoral student, Jörg Ulbert, who has investigated the foreign policy of the Orleanist regency 1715-23. Like other contributors, Malettke warns against taking the king's famous violent outbursts at face value, indicating that he was a careful and cautious politician. Thomas Stamm-Kuhlmann firmly locates the king's ambiguous historical reception in the writings of his two children, Friedrich II and Wilhelmine von Bayreuth. The former increasingly identified with his father after 1740, presenting him as a sober monarch who sensibly abandoned his own father's extravagant ways and nurtured Prussia's meagre resources. The latter portrayed him as a cruel bully who tormented his family and came close to executing his son. Stamm-Kuhlmann's discussion then abruptly changes tack by examining Jochen Klepper's literary depiction of the king in his novel 'Der Vater' (1st published 1937), using this to make a moral condemnation of passive resistance to brutal regimes.

Many of the contributors point out that we still lack a complete modern biography of Friedrich Wilhelm. Certainly, the 2001 celebrations went some way to providing a more nuanced picture of this difficult man who, like his own father Friedrich I, still stands in the great Friedrich II's shadow. This collection serves as an introduction to some of the important issues associated with the Soldier King, but it is clear that much work remains to be done to advance beyond an interpretation that still rests heavily on the prodigious output of earlier generations of historians.