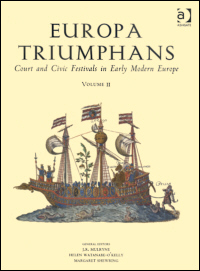 The two massive and richly illustrated volumes of Europa Triumphans and William Leahy's compact study about Elizabethan processions, all recently published by Ashgate, address the same theme: festivals and processions. The three general editors of Europa Triumphans, Helen Watanabe-O'Kelly, J. R. Mulryne and Margaret Shewring, are literary scholars rather than historians, and the same holds true for Leahy. Leahy, moreover, takes part in the John Nichols project, of which Shewring is the director. In spite of these similarities, Europa Triumphans and Elizabethan Triumphal Procession are profoundly different in style, method, and objectives. Leahy offers a post-Marxist critique of previous work on Elizabethan processions, in a language that betrays a penchant for postmodern theoretical discourse. The Europa Triumphans volumes bring judicious introductions, followed by editions of contemporary descriptions of festivals - the very source Leahy warns us against. Though Leahy's work cannot and should not be balanced against the impressive accumulation of scholarship presented in Europa Triumphans, its does offer a useful commentary - sufficient reason for me to review the two publications together.

Europa Triumphans is the fruit of a long-standing cooperation among a group of scholars who have established positions in this field. The three general editors, most conspicuously Helen Watanabe-O'Kelly, have published monographs, bibliographies, and conference volumes that form the basis of much recent research. [1] Two of the editors, Mulryne and Shewring, are connected to the Warwick-based Research Center for the Study of Renaissance Elites and Court Cultures. The current book, the editors explain, is intended as a 'gateway collection' opening the multilingual world of early modern festival descriptions, scattered over rare prints collections in libraries across Europe, to a wider audience. A first section offers general introductions, after which the book follows a trajectory leading the reader to festivals in France, Italy, Poland-Lithuania, the Netherlands, the Empire, Scandinavia, and the Viceroyalties in Peru and Mexico. The choice of examples is both original and convincing. Within this wide geographical scope there are more specific themes, such as Henry III's 1574 travels from Poland via Italy to France, as well as the festivals arising in the context of the Protestant Union on the eve of the Thirty Years' War, and the fall of Protestant stronghold La Rochelle in 1628. Thus, the religious dimension of festivals is well served. The overseas Viceroyalties allow a glimpse of the Spanish Empire - and compensate partially for the absence of Spain in the series. England is the other notably absent monarchy, but here, the editors plead, other initiatives, such as the Nichols project charting Elizabethan progresses, are underway. Civic, typically urban festivals, in monarchies as well as in republics, are well represented, correcting discussions of ceremony focusing narrowly on dynastic Europe. 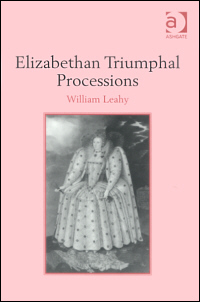 Each section is preceded by several introductions, significant articles by distinguished historians, art historians and literary scholars. The festival descriptions themselves are presented in somewhat abbreviated form, with the original language and English translation presented side-by-side. General commentaries are given in the section introductions; endnotes explain textual matters and biographical or political details in the festival descriptions. On the whole, this combination of well-informed introductions and translated texts seems to work quite well. It allows the reader to compare primary sources from regions and periods not usually brought together, and thus facilitates a more comparative approach to festivals. Yet it is not altogether clear to me which readership is expected to use this 'gateway collection' or how readers will use it. Richard Alewyn's frequently cited small volume from 1959, Das große Welttheater, likewise combining Alewyn's evocative introduction with contemporary texts edited by Karl Sälzle, was widely used as a first exploration of dynastic festivals. For that limited purpose, this collection is far too ambitious. Specialists can use these volumes to broaden their horizon, to include in their research examples from languages and regions they hitherto necessarily neglected - yet this is not likely to change the focus of their research. Research seminars for advanced students studying courts and ceremonies can profit from the introductions as well as from the translations; for them, Europa Triumphans will be a priceless resource.

The general introductions address themes of major importance. Watanabe-O'Kelly opens with a perceptive discussion of festival booklets as a Quellengattung: she notes that the descriptions should never be taken at face value (3, 7, 10): the commissioned authors and engravers depicted what their patron would have liked to see, not necessarily what actually happened. Most books, moreover, were either printed before the festivals, to be distributed during the occasion, or commissioned after the proceedings. Watanabe-O'Kelly also introduces the vital theme of the Adressat of festivals and the specific occasions festivals were intended to celebrate. R.J. Knecht provides a well-informed and lively overview of the French court and its spectacles from the late fifteenth into the early seventeenth century. Ute Daniel, elaborating elements from Watanabe-O'Kelly's overture and Knecht's description, states that festivals, particularly urban entries, represented a dialogue between the visiting ruler and the organizing civic authorities, both parties using the occasion to make visible their political concerns (33). Audiences, moreover, could interpret the proceedings in their own not necessarily uniform or orthodox ways (44). She stresses the specificity of audiences and occasions, underlining the relevance of the mutual competition among rival and allied courts rather than the princes' reputations in their own territories - a point earlier made by Volker Bauer. Daniel repeatedly notes the fact that descriptions consciously 're-staged' the original event, and in the process may have changed basic facts. The author takes her examples mostly from German courts around 1700, discussing funeral ceremonies in some detail. Iain Fenlon provides a brief overview of the development of festival music, from the drums and trumpets at court, to intermedi in banquets and festivals, to the court opera arising around 1600. Early incidental music is particularly difficult to reconstruct; descriptions refer to it, but we have no musical notation. Roger Savage recreates the process of staging the theatre, outlining the figure of the corago or general director responsible for purveyance, machinery, rehearsals. Specialists were reticent in spreading their professional secrets, yet Savage gives examples that bring to life the practical side of court theatre. Henri Zerner, finally, addresses the 'irretrievably gone' visual experience of festivals, particularly the urban entries. He suggests the visual renderings of festivals were formed by three factors: the event itself, the visual tradition of the artist and the genre, and the imagination of the artist (82). This again helps to discriminate between the event itself and its idealised representation. Conventions in the depiction of ceremonies and festivals, such as the familiar zig-zag processions (93) recur, even if they do not necessarily reflect the actual situation. Zerner points to the fuzzy delimitation between participants and spectators, and ends with reminiscences of the grande fête of the 1968 student movement: ideally, he suggests, festivals convey a sense of community and social harmony.

Leahy's study fits in precisely here, because he wants to chase the myth of the natural bond between Eliza, the virgin queen, and common English people. Elizabethan progresses, so the tradition holds, show the fine-tuned political and histrionic talents of the queen, charming her people into a loving obedience and respect for hierarchy. Leahy argues that descriptions have for too long been taken at face value; historians have uncritically replicated the myth of a 'community' between Elizabeth and her subjects. He asks himself how abject poor, disbanded hungry soldiers, peasants chased from their lands by lords enclosing their fields, could miraculously have been changed into cheering crowds as soon as the queen approached them. Coercion, he suggests, was far more relevant for maintaining hierarchies than Elizabethan pageantry. An introduction and a first chapter state objectives and methods; a second chapter seeks to reconstruct the attitudes of previously invisible 'commoner' audiences, a third chapter reinterprets the programme of three major festivities, a brief conclusion, organized around a painting representing a procession, restates major points. In introducing his questions and methods, Leahy brings in the familiar cohort of cultural studies-icons; I found his overuse of terms ('interpellate'; 'negotiate', two words separated by a /) tiresome.

The author seeks to trace responses of townspeople and peasants by offering circumstantial evidence about their standards of living, by reporting minor incidents in the staging of festivals (such as painters refusing to do their work because of low pay), and by citing remarks from more critical sources describing Elizabeth's progresses, mostly diplomatic correspondence. His method is not always convincing. Following a 'hermeneutics of suspicion' (71) Leahy supposes that the execution of Charles I in 1649 may be seen as evidence for an unfriendly population; somewhat more to the point, he argues that riots in 1596 make it less likely that the population had happily applauded the queen when she toured this county in 1592. The author mentions the silent crowds watching Anne Boleyn's 1533 entry, to suggest that bystanders may have been equally passive during her daughter Elizabeth's 1558 procession. To support his case, he refers to two outside observers, ignoring the happy populace recorded in Mulcaster's official description (66). These two Catholic witnesses, however, should have been delighted to report either the absence of cheering people or the presence of unfriendly crowds.

Leahy is probably right in criticizing the overstatement of Elizabethan harmony and community. He stridently makes a point stressed repeatedly in more balanced terms in the Europa Triumphans volumes: commissioned descriptions 're-stage' the interactive moment of festivals, and can easily have invented happy spectators or other details. While the author's questions are entirely legitimate, his methods are not invariably sound, and his conclusions remain as tentative as the myths he wants to dispel.

These two unequal publications help us to rethink the early modern dynastic or civic festival. Helen Watanabe-O'Kelly and Ute Daniel, in particular, pose many questions that can be addressed while studying the rich materials of Europe Triumphans. The feelings of community and social harmony, hinted at by Zerner, undoubtedly played a role; yet it is likely that the ceremonial dialogue between ruler and elites, or among the rulers of Europe had its bêtes noires and outsiders. Spectators were necessary for the success of a festival, but the 'ausgeworffene Münz', roasts and wine-spouting fountains did not turn the bulk of the townspeople into participants, and may not have charmed all, as Leahy reminds us.