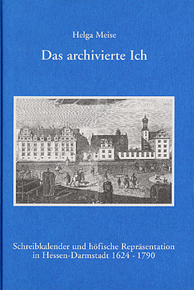 The imposing 600-odd page 'Habilitationsschrift' of Helga Meise, a literary scholar, discusses the development throughout the seventeenth and eighteenth centuries of a 'Quellengattung': the 'Schreibkalender'. These printed calendars included open spaces that could be used for day entries, lists or comments. In addition, some calendars offered longer printed digressions on a variety of themes. The 'Schreibkalender' were the most widely distributed printed works after the bible and the catechism. Yet because of the curious mixture of printed layout and handwritten additions, the calendars have never been thoroughly researched. Meise limits her study to the 'Schreibkalender' produced between 1624 and 1790 by the dynasty ruling in Hessen-Darmstadt. She gives a careful description of the huge corpus of these rulers' calendars, first in general, then per individual ruler. Her study connects the Hessen-Darmstadt 'Schreibkalender' to several themes increasingly present in recent historiography: 'Selbstzeugnisse', courtly representation, noble 'memoria'.

The 'Schreibkalender' evolved from a dominant printed format with brief handwritten additions to longer, more personal and more varied statements in handwriting, loosely attached to the structure of the printed calendar. Step by step, Meise argues, the calendar prepared the way for the autonomous diary, in which entries were no longer prearranged by the spaces left open in printed volumes. Meise points out that the calendars were carefully stored by the ruling dynasty, and in the process, writing became a fixed dynastic tradition: each member of the family wanted to "inscribe" (537) himself or herself into this dynastic effort.

Written by rulers and their spouses, the Hessen-Darmstadt calendars necessarily reflect court life. Meise connects the dominance of courtly representation in these as well as in other written sources to a process of 'Verschriftlichung' of ceremony. Indeed, she argues that ceremonies and festivities were increasingly represented in writing and print; the interactive moment of ceremony itself could therefore become less important. Finally, Meise presents the calendars as a 'Schwellengattung', a medium indicating an intermediate stage in the rise of individual writing, showing as well as assisting the habit of putting personal feelings in addition to dealings into writing.

The calendars hovered between print and handwriting; for her book, Meise chose a form situated between an edition of sources - not a likely possibility in this case - and an analytical discussion using the entries in the calendars to support a more general argument. By frequently offering sequences of usually very short quotations the book conveys a lively impression of the 'Schreibkalender', but the very density of quotations tends to overwhelm the instances of sustained analysis. A discussion of the 'Schreibkalender' could have been equally effective with only a small share of the citations offered here. This imbalance becomes disturbing where Meise's argument goes beyond the description and development of her 'Quellengattung'.

Meise connects two major themes to her 'Schreibkalender': the growing role of writing and print in courtly representation and the rise of individualism. Her theses are clearly stated in the very brief conclusion, and hinted at in several parts of the study, but I missed a careful and gradual construction of her argument: it jumps from the contextual discussion of the calendar entries to rather brief or cryptic general statements. For me, the connection between the cited material and the general statements was not always evident. Thus, we read about ceremony in all chapters, but hear that after 1668, the calendar "übernimmt mehr und mehr die Funktion der Repraesentatio Maiestatis, die bislang Zeremoniell und Festkultur erfüllt hatten" (359).

Meise then connects this to the decline of ceremony as an 'Ereignis', and to the strengthening of a range of more material and lasting forms of court culture (palaces, collections, libraries, paintings, jewelry). Surely, we can see a flowering of descriptions of ceremony from the 1670's onwards, that was in some respects as important as ceremony at court. A tendency to choose media liable to be reproduced and transported for the rulers' representation is in evidence from the later fifteenth century onwards. Yet how can we connect this process to the excerpts from the calendars given by Meise, and to the function of the calendars?

At most courts, we see an intense 'Verschriftlichung' of ceremony in the century after the Peace of Westphalia: the increasing density of ceremonial records in the archives of European courts shows this as well as the expanding public discussion of ceremony in print - though the latter was typical mostly for the German territories. I can see that the calendars somehow fitted into this process, though in a very limited, intradynastic way. This does not tell us much, however, about ceremony at court. Undoubtedly, Meise's painstaking knowledge of this wonderful source could have helped us to learn more about the gradually changing forms of ceremony; we read about changes in the detailed descriptions, but we do not find them reflected in her conclusions.

To a lesser extent, the same holds true for the other major point: the increasing presence of personal notes in the calendars. Initially, these were concentrated not in the calendars, but in other forms of dynastic writing such as poetry and prayers. Finally, they penetrate into the traditional domain of the calendar. It remains unclear, however, whether the calendars themselves had anything to do with this change: Meise seems to argue that the calendars were an active agent of the process, instead of a mere receptacle reflecting wider social and cultural change.

The chronological-dynastic make-up of "Das archivierte Ich" may have impaired the clarity of the argument: if Meise, for example, would have grouped 'Ich-Aussagen' in one chapter, she could have made her point with more force. A thematic layout could have included a chapter about the changing ways in which the ruling family reported the festivities and ceremonies at court. Other possibilities come to mind: the more private aspects of family life at court, the lists and statistics recurring in the calendars. In such a structure, the connections between the 'Schreibkalender' and other forms of writing practised by the dynasty could also have received more focused attention.

In depth and scope, "Das archivierte Ich" is an impressive study: it covers almost two centuries, it offers a definitive and authorative presentation of the 'Schreibkalender', and at the same time it shows a mastery of debates in a range of related fields and disciplines. Yet the form of the book is not ideal, and in its major theses the book tends to jump too rapidly from the presentation of excerpts from the source to general conclusions. Undoubtedly, however, it will be used both for its rich potential in learned detail and lively quotations as well as for its entirely competent contextualisation of an important source.