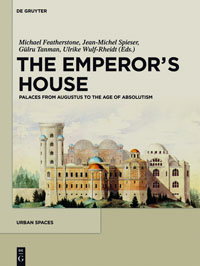 The Emperor's House brings together papers presented at an eponymous conference held in 2012 at the Pera Museum of Istanbul. It is the fourth volume in the series 'Urban Studies', until now devoted to Antiquity.

This lavishly illustrated volume includes twenty-six papers on imperial palaces: five contributions cover Antiquity; four deal with the Middle Ages in the West, ten in the East; seven move to the sixteenth century and beyond. The Roman imperial palace opens the volume, and Rome returns later in its papal guise. Yet, indisputably, Constantinople stands at the heart of this collection: nine contributions focus on the city and its palaces from Antiquity to the Ottoman period. Visigothic palaces and the Carolingian imperial tradition with its diverse medieval offshoots recur in several contributions. Two papers deal with the Louvre and Versailles respectively. Individual papers extend the coverage of the book to the Seljuks, the crusaders, Bulgarian, Russian, Swedish and Austrian Habsburg palaces. The epilogue shows how Ludwig II of Bavaria used Byzantine examples in his spiritual-architectural phantasies - his extravagant project for a Byzantine palace complex adorns the cover of The Emperor's House.

All contributors are specialists with high standards of scholarship, yet there is a great variation in length, language, tone and accessibility. The length of papers ranges from six (Staffan Wahlgren on palaces in Byzantine Chronicles) to forty-three pages (Tülay Artan on Ottoman grand viziers' palaces). Sixteen papers were written in English, eight in German, and two in French. Moreover, in terms of accessibility and audiences, different registers are used. The first two papers, by Ulrike Wulf-Rheidt on the Palatine palace in Rome and by Jean-Michel Spieser on Galerius' palace in Thessaloniki respectively, present detailed research overviews to colleagues in their field. A similar tone characterises Matthias Untermann's description of Pfalzen in the medieval empire, or Sabine Frommel's discussion of Pierre Lescot's work on the Louvre. Painstaking but somewhat narrow archaeological or art historical reconstructions can be found elsewhere in the volume, but they do not predominate. The papers on Byzantine palaces are powerful not only because of their strong presence in the volume, but also because several authors (Michael Featherstone, Ruth Macrides, and Paul Magdalino among them) relate their research to wider issues and appeal to non-specialist readers. Their work is close to the 'architecture et vie sociale' approach pioneered long ago by Jean Guillaume. [1]

Many authors in the volume combine detailed reconstruction with an accessible style and a broader appeal. Judith Herrin presents the intriguing history of the Ravenna palazzo scomparso, depicted in a sixth-century mosaic and described in numerous texts, but still lacking any substantial material evidence. Philipp Niewöhner convincingly reconstructs some 'missing links' between Late Antique and Byzantine architecture and questions the impact of other, more distant, examples. Javier Arce carefully demonstrates why the site of Recópolis in Spain must have been a storage facility rather than a capital or a palace. Manfred Luchterhandt describes how the Roman Lateran palace gradually changed shape, in an overall 'Umbewertung einer weltlichen Hofhaltung zum Pilgerziel'. Annie Renou's probing chapter on palaces in France after 843 suggests several useful approaches. She outlines the presence of a domestic space (camera), an administrative-public space (aula) and their relationship with a sacral space (capella). Furthermore, she suggests several tensions: the metamorphosis of palaces into castles, the rise of noblemen's palaces, and the claim of the church on the monopoly over the sacral. Judith Ley traces the examples for Carolingian Aachen and uses numerous images and drawings to powerfully suggest emulations as well as differences in scale. Martin Olin's story of Charles XII's involvement with the building of the Stockholm palace is entertaining as well as illuminating, although his suggestion that the wandering Swedish king was inspired by the dignified isolation of the sultans in the Ottoman empire remains unsubstantiated.

Tülay Artan's text on three grand viziers (Ibrahim Pasha, Sokollu Mehmed Pasha and Siyavus Pasha) and their palaces is an important research effort. She traces the history of these palaces with their (often unclear) locations, but zooms in mostly on problems of ownership and inheritance. The grand vizier's palace remained in the hands of the sultan and would be granted to a new officeholder upon the dismissal or death of the incumbent. However, grand viziers would also build and own palaces in addition to their formal administrative residence. The viziers, the upper echelon of Ottoman government, actively used the instrument of the pious foundation (waqf) to ensure that property could be maintained in the family. Artan's contribution stands out in the volume not only as an important research effort: the length, considerable detail, and complicated terminology (mostly, but not invariably explained) make this text an outlier in the volume.

In its current, somewhat disparate state, The Emperor's House fails to attain the potential inherent in the high quality of most contributions. Specialists reading sections relevant for their work will not feel encouraged to peruse other pages of the book: there is a one-page foreword, but no introduction or conclusion. Neither do the editors seem to have exerted a strong influence on the final shape of the contributions. This is a missed opportunity, for readers who do examine the volume in its entirety will find many clues and questions relating to comparison. Several themes could have been highlighted by the editors. Many contributors concentrate on examples, emulation and imperial traditions from Rome and Constantinople to Versailles and Ludwig II of Bavaria. Their dispersed remarks necessitate an overall conclusion. In addition, the connections between the palace and city are implicitly or explicitly discussed in most papers. Temples and churches, hippodromes and circuses, created alternative foci for interaction; citadel-like defensive structures may have reduced contact; Reisekönigtum (Untermann on early medieval Palatine palaces) and rural summer palaces (Hellenkemper on Byzantine hunting lodges and coastal villas) suggest yet another form of contact. Furthermore, the editors could profitably have ventured a typology of the numerous palaces. Can Renou's tripartite scheme camera-aula-capella serve as a tool for understanding palatial complexes? Is it better to concentrate on the changing formats of palatium and castellum (Bisserka Penkova on Bulgarian Preslav and Tarnovo), urban palace in the capital or outdoor hunting lodge? Some general considerations would have been very welcome, and they could substantially have strengthened the coherence of the volume. Finally, although all contributors position themselves in their specific fields, the volume as a whole lacks an overall statement pointing to earlier efforts considering palaces in a wider comparative perspective - Palais et Pouvoir edited by Marie-France Auzépy and Joël Cornette, likewise with a strong presence of Constantinople, immediately comes to mind. [2]

The Emperor's House shows that it is not easy to turn a successful conference into a good book, and underlines that the act of bringing together specialised and high-quality texts dealing with different regions and periods does not in itself constitute comparative history. The materials presented in this book are sufficiently rich to provide a basis for important statements on the Roman-Byzantine imperial tradition and on palaces in general. The fact that this challenge was not accepted by the editors will reduce the significance of this collection.