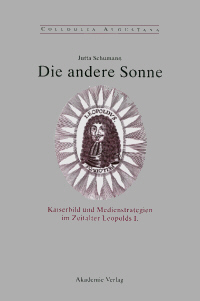 The study of "Repraesentatio maiestatis" has a long tradition among historians as well as art historians. In recent decades, however, the focus of research gradually underwent changes. While we may still find detailed discussions of the messages hidden in paintings and statues, there is a tendency to concentrate less on iconography, more on the processes and media of the 'fabrication' of rulership. [1] Moreover, while earlier historiography concentrated on the cultural products emanating from the centre, it became increasingly clear that knowledge about the reception of such emanations was painfully inadequate. Information on the intended and actual audiences of princely propaganda is scattered and incomplete: interpretation remains challenging. Jutta Schumann's dissertation offers an intelligent and learned contribution to this field. "Die andere Sonne", a dissertation with the proportions of a 'Habilitationsschrift', discusses the image of Emperor Leopold I, and the media through which his reputation took form.

"Die andere Sonne" opens with a lengthy and thorough introduction. The next section, almost two-thirds of the book, is devoted to the 'Tagespublizistik' in the empire. Schumann first discusses the media (pamphlets, 'Einblattdrucke' or illustrated one-page prints, newspapers, songs), then charts Leopold's changing reputations from 1658 to 1690. This careful reconstruction of Leopold's image in the 'Tagespublizistik' in the empire presents no truly unexpected conclusions, but adds detail and nuance to the general image. We read about Leopold's first decade, when the imperial ambitions of the Habsburg dynasty and the Jesuit connection of the young ruler were viewed with suspicion in the empire; about a second phase where the emperor's misfortunes (family deaths, war with Louis XIV) eased fears; finally about a third phase where military successes and moderate policies reinforced the emerging positive image. Leopold's good name in the empire was the consequence largely of his uncomfortable position between the Ottoman Turk and Louis XIV (hence the anagram on Leopoldus: two enemies or "pelle duos"); his respect for the Westphalian settlement, and his general mildness. A positive image of Leopold prevailed in the empire. Paradoxically, even when the emperor proudly paraded Habsburg dynastic supremacy in a court festival, this would not influence his reputation of unassertiveness in the empire.

In a much shorter third section, Schumann turns to the forms of propaganda more closely related to - and orchestrated by - the court in Vienna: court festivals, building, historiography. Her competent discussion offers less detail than the preceding section; it also relies more heavily on literature and has relatively little to say about the court itself. An equally brief but important fourth section discusses a form of image-building helpful for the emperor, but only indirectly related to the imperial court. Schumann labels this 'multiplizierende Imagepflege': the notion that writers, clergymen, scholars, medal-makers, and others, produced laudatory works either because they were indirectly dependent on the court's favour, or because market conditions made the production of such works attractive.

Schumann's conclusion underlines the variety in media as well as audiences; it stresses the relatively autonomous development in these various layers of the public sphere. In fact, the conscious manipulation of opinion by the emperor remained quite limited in scope. Moreover, most media reached only a small upper layer of the population.

"Die andere Sonne" is a valuable book in several respects. Schumann's overview rests on a solid and extensive basis of research in primary sources. She considers a great variety of media, and thus is able to put into perspective the position of the Habsburgs in the centre of a 'public sphere' they could only marginally control. Her overall interpretation based on wide-ranging as well as detailed knowledge is entirely convincing: it stresses both the limited impact of the emperor's cultural policies, and the success of the emperor in a range of media outside of his direct control. Schumann shows that Leopold's image was constructed at many levels. Only in a small circle of core activities could the emperor dictate his norms; a wider circle might be influenced by privileges and favours, or by personal connections. Market conditions made it attractive for others to sing the emperor's praise. Elsewhere, the perception of the European constellation convinced writers and artisans to describe Leopold in positive terms. The careful delineation of these levels of influence and autonomy is among the main strengths of this book.

Somewhat surprisingly for a work of this calibre, "Die andere Sonne" fails to integrate the perspectives of other recent contributions to her field. Maria Goloubeva's dissertation is mentioned in a footnote (p. 15) alongside the less notable study by Rouven Pons. [2] While, as Schumann rightly states, these works do not run counter to her conclusions, more could have been said about the parallels and differences. Goloubeva's work sets other priorities, but comes to similar conclusions. Likewise, Schumann could profitably have integrated the excellent study by Jens Ivo Engels on the images of the French king in early eighteenth-century France. [3] Engels also underlined the autonomy of the various layers in the 'public sphere'. These limitations do not diminish Schumann's achievement: this book is rich in materials and interpretation; it offers essential reading for all interested in the study of the public sphere in the empire.