Reformation in Britain and Ireland 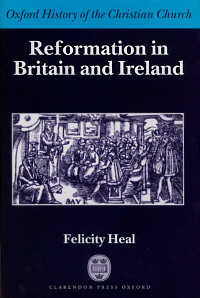 Despite the skepticism and secularism associated with the Enlightenment and its modern legacy, our twenty-first century world is one of resurgent religiosity in which millions, perhaps billions, embrace and defend identities based on precisely specified religious beliefs. How they come to those identities, and how those identities change, are urgent questions to which there are no simple answers, but these two ambitious books about sixteenth-century Britain and Ireland offer tantalizing clues.

Felicity Heal, a senior scholar at the University of Oxford, attempts a comparative overview of sixteenth-century Britain and Ireland in a substantial volume for the Oxford History of the Christian Church. Clare Kellar contributes a monograph (based on a recent Oxford D. Phil. thesis supervised by the Scottish historian, Jenny Wormald) that is devoted to the narrower subject of "Scotland, England, and the Reformation, 1534-1561". 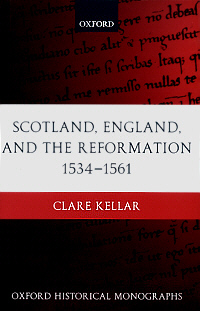 It was timely, perhaps even necessary, that a generation of late twentieth-century "revisionist" scholars should have attacked the dominant (generally triumphalist) Protestant historiography which established itself in Britain in the centuries after the Reformation, and it was important to show - as John Bossy, Eamon Duffy, Christopher Haigh, and others have done [1] - how pervasive, enduring and functional was Roman Catholicism in many places where it was later uprooted or overwhelmed. But as a transforming series of events, the Reformation cannot be argued away. It changed the course of British history and contributed to centuries of religious conflict. A complex confessional demography evolved with crucial divisions among and within the four kingdoms. In their different ways - one comprehensive and comparative, the other monographic and precise - Heal and Kellar explain what happened in Great Britain and Ireland, and to a lesser extent, why.

Similar causes should produce similar results, but they do not always appear to do so. Military conquest and subsequent Jesuit educational efforts (in the 1620s and 30s) restored Roman Catholicism to Bohemia - though without entirely extinguishing Bohemian forms of Protestantism. But military conquest and the efforts of the Protestant Church of Ireland (and of evangelical Scottish settlers and churchmen in Ulster) had quite the opposite effect, or in any case failed dismally to alter the western island's prevailing Roman Catholicism.

This problem is connected with the question of the relationship between the individual and society. Sometimes believers cling heroically, even suicidally, to the faith of their fathers as did Thomas More and John Fisher in early Reformation England. But it is also clear that what people believe can change, and can be changed. The virtue of these two books is that both delineate how "religions" (or "confessions") are fabricated and modified by extrinsic, sometimes secular, forces.

In Reformation in Britain and Ireland Felicity Heal avoids the temptation to offer serial narratives of events. Her comparative approach benefits the already knowledgeable reader, but might make hard going for a novice trying to piece together the story of religious change in the four kingdoms. There is no single place to look for what happened in one or the other, and despite a capacious index, few individuals, institutions, or events are treated in a comprehensive way. But by considering the religious ferment of the sixteenth century as a process which was occurring throughout western Europe, Heal escapes a still-common sectarian approach to the subject. Her interpretation is neither Catholic nor Protestant, except that it takes the Reformation seriously and treats it as more than an unfortunate interruption in the seamless sanctity of western Christendom. And by using in her title the singular, "Reformation" - rather than the modish "Reformations" - she signals an outlook which is unitary rather than fragmentary, although it leaves to others the focus on the Counter- (or Catholic-) Reformation.

The great strengths of Heal's volume are its admirable breadth, the formidable learning and bibliography it commands, and the clarity of its presentation. The weaknesses are also threefold. The first, a consequence of the constraints of the series, is the terminal date of 1600, which Heal acknowledges to be a compromise incapable of satisfying all tastes (vii). But if, as most would agree, the Reformation was not the event of a moment, but a drawn-out, laborious process, then truncating its examination in 1600 makes it difficult to draw conclusions about something still evolving. Related to that is the second problem: a feeble summation. The last sentences read: "Despite the aspiration of the reformers to make worship common, local arrangements continued to modify the Protestantism of the settlements in a variety of directions. In the process a distinctively post-Reformation religion was grounded in community and in daily experience" (484). These seem unworthily vague in a book to which so much labor and learning have been devoted, and they leave to readers (who may look beyond 1600) the challenge of drawing more pointed conclusions. Finally, a weakness almost inescapable by those who courageously attempt breadth in their analysis, is the dependence (outside of England) on recent secondary work. Here the temptation is to synthesize accounts by scholars who do not necessarily agree with each other, making a seamless garment of interpretation where local scholars, in fact, are sometimes in fierce contention. For instance, with regard to Ireland, it has been argued that the Reformation had not a chance of success, at least from the reign of Edward VI. [2] Others are less sure that the die was cast so early or so conclusively. [3] A consensual view is not yet on offer. But these are, collectively, small cavils against an ambitious work that achieves so much, and so significantly advances the comparative history of the Reformation in Great Britain and Ireland.

Clare Kellar's Scotland, England, and the Reformation 1534-1561 is a specialist complement to Heal's survey, and it focuses on the interactions between the early reform movements in the two kingdoms, while providing useful side-glances at Ireland. Despite their nominal political and cultural differences, the fact of a permeable land border between England and Scotland made each a refuge for dissidents from the other. English Catholics went north in the 1530s and 40s. Scottish proto-Protestants, not least John Knox, went south, particularly during the brief, Protestantizing, reign of Edward VI (1547-53). When Mary Tudor (ruled 1553-8) closed down the Protestant sanctuary that England had become, Scottish and English Protestants found themselves worshipping and living together in refugee centers on the continent. One particularly interesting aspect of Kellar's account is the comparatively benign nature of the regency of Mary of Guise, the French widow of King James V who with French support and military assistance effectively ruled Scotland from 1550 until her death a decade later. It was the English Queen Mary, not the French one in Scotland, who by her persecution of Protestant heresy provided most of the grist for John Foxe's famous and influential martyrology. Whereas Catholic Spain played the bete noire for English Protestants under Mary I, and Protestant England eventually played a similar role for Irish Catholics under Elizabeth I, Kellar's view of Catholic France is that it did little to provoke the animosities, or xenophobia, of Protestant-leaning Scots. Their vigorous hatred of Roman Catholicism seems to have been home-grown and almost abstract.

What Kellar's book makes clear is that the English and Scottish Reformations were not isolated from one another. Each made significant contributions to the other. Though their origins and outcomes were different, they fortified and influenced one another long after the period she examines. In both kingdoms there was substantial resistance to the Reformation, and in both kingdoms Catholic areas, families and clans survived. But in both kingdoms it was nevertheless the case that the Reformation "succeeded", and one or more varieties of Protestantism became part of a proto-national identity. Although both of these Protestant kingdoms were later to play a role in the attempted Reformation in Ireland, the results there were very different. Neither the remodeling of the Church of Ireland after the model of the Reformed church in England, nor the migration of many thousands of lowland Scottish Presbyterians to Ulster dented the Old Religion in Ireland. It is a challenge to the historians of Ireland to explain why this did not happen there with as much clarity and thought as Clare Kellar brings to Scotland, England and the Reformation 1534-1561.