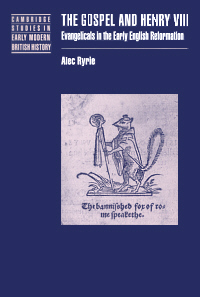 The monarchical interpretation of the English Reformation has enduring simplicity. Royal will or whim initiated the break with Rome, then drew back from the brink of continuing reform. Another sovereign loosed the reins until, dying six years later, he was succeeded by his equally short-reigned older half-sister who slammed on the brakes with a vengeance. Finally, the long-lived younger half sister, Elizabeth I, achieved a "compromise" out of those confused beginnings. Generations of historians have polished and/or tinkered with this narrative. In recent decades they have increasingly wondered where "the people" were in all this monarchical turmoil. Not just the vulgus, but the lay and clerical elites. What was happening in the society and the church while the anointed rulers were so vigorously changing their minds?

These are the questions which pre-occupy Alec Ryrie in his examination of the last nine years (1538-1547) of the reign of Henry VIII, the monarch who set events in train but then had second thoughts about the consequences. The focus might be said to be on "momentum", the extent to which social change became a force to rival royal authority, a force which could not easily be controlled. Whether created or unleashed by Henry, the genie of religious reform - on Ryrie's account - refused to go back in the bottle when commanded to do so. His sedulous explanation of the ways and means of its survival makes more intelligible the rapidity and force with which "reform" re-emerged at Henry's death, and thus helps to understand the remarkable burst of change in the reign of Edward VI.

The outgrowth of an Oxford D. Phil. thesis under the supervision of Diarmaid MacCulloch, this study seems admirably mature and reflective. It does, of course, look at one side of the story, much as Eamon Duffy in The Stripping of the Altars [1] looked at the other. In the suitably qualified tradition of A. G. Dickens, Ryrie builds a case for the eventual triumph of the English Reformation despite the obstacles which it faced in the late reign of Henry VIII.

Two introductory chapters set the scene and explicate the bewildering patchwork of innovation and orthodoxy which confronted the late Henrician English. The five following chapters examine what might be called the breeding grounds, or sanctuaries, in which reform designs survived, or even flourished. Those include the reform centers of the Continent to which a small but significant number of English went in exile (Chapter 3); the shadowy world of Nicodemism, or ostensible conformity to Henrician orthodoxy (Chapter 4); the ancient universities where pockets of evangelicalism flourished, especially at Cambridge (Chapter 5); the Court itself where powerful figures like Queen Katherine Parr and Archbishop Cranmer offered sporadic protection (Chapter 6), and finally what Ryrie calls "The Evangelical Underground" (Chapter 7), a network of like-minded but by no means unanimous would-be reformers.

Two useful appendixes enumerate first, reformers executed or exiled between July, 1539 and January, 1547 (thirty-six of the former, thirty-seven of the latter), and second, "controversial religious printing in English, 1541-1546", broken down into "evangelical, domestically printed", "evangelical, printed abroad", and "conservative". An ample bibliography is exemplary.

Alec Ryrie's persuasive conclusion, based on admirable detective work, is that "the last years of Henry VIII's reign were the crucible of English Protestantism [...]" (255). Too much had been done to be easily undone. Ryrie summarizes: "While most of the doctrine of the old faith remained in place, serious inroads had been made into many of the practices to which evangelicals objected most strenuously. Pardons and indulgences had disappeared with papal jurisdiction. Auricular confession had been rendered less objectionable by the Six Articles. The King's Book had emasculated the practice of prayer for the dead. Even the monopoly of Latin in worship had been broken. Clerical celibacy remained unreformed but, by its nature, was a practice which could rouse little ire amongst the laity. Monasticism was gone; pilgrimages had been prohibited; official iconoclasm was steadily eroding the use of images" (255-56).

The movement which Henry had set in motion could not, at least in his lifetime, be strangled in its cradle as a result of his doubts.