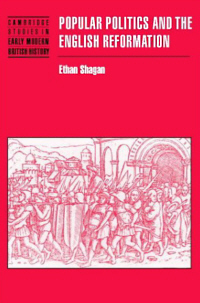 Not long ago - and certainly for much of the second half of the twentieth century - the dominant view of the English Reformation was that it enjoyed important elements of popular support, despite having been initiated and sporadically supported by the Crown. These elements of reaction against the corruption, hypocrisy, and exploitation that were thought to characterize the late medieval Church helped to explain the ultimate success of the Reformation in England. Of course, Catholic scholars never subscribed to this "Anglican" interpretation, but theirs was a faint voice until a snowball of "revisionism" gathered size and weight in the closing years of the century. Catholics and non-Catholics alike (Eamon Duffy, Christopher Haigh, J.J. Scarisbrick, John Bossy, and others) powered this challenge to what had become a veritable orthodoxy. Ironically, the way was prepared by the highly secular work of Geoffrey Elton whose highlighting of the administrative efforts of Thomas Cromwell, Henry VIII's architect of reform, called attention to the prodigious resistance to religious change which Cromwell faced and overcame.

This resistance, "conservatism", or enduring Catholicism (whatever one calls it) has occupied a new generation of scholars, and their collective effort bids fair to becoming a replacement orthodoxy, opposite in direction but equal in force. If the lingering Catholicism of the English has long been under-rated and insufficiently appreciated, it now threatens to be seen as so widespread, profound and tenacious that the undoubted emergence of a self-consciously protestant culture, society and nation becomes something of a mystery. Shagan's monograph is a cautious but forceful challenge to Eamon Duffy & Co. It builds a case for an English Reformation "from below", and it does this chiefly by looking for signs of "collaboration", evidence that the Henrician (1532-47) and Edwardian (1547-53) reforms encountered significant cooperation, or even connivance, in addition to the sporadic resistance on which the revisionists have focussed.

Where Elton saw inspired government coercion as the key to the Reformation's success, Shagan sees popular participation, sometimes grudging, but occasionally enthusiastic, as a crucial component. Where Elton saw a magisterial reformation "from above", Shagan painstakingly builds a case that at least some of the transformation came "from below" and was driven by the desires and inclinations of the English people. Shagan's eight chapters (preceded by an historiographical introduction) are essays on this theme. Chronologically they range from the career, trial and execution of Elizabeth Barton, "the holy maid of Kent" (1534) to the Pilgrimage of Grace (1536), the dissolution of the monasteries under Cromwell (1535-40), and into the more doctrinally driven reforms of Edward VI (1547-53, where Shagan wisely follows the tutelage of Diarmaid MacCulloch). These are, for the most part, re-visits to the sites of much historical scholarship and controversy, but they are by no means frivolous or redundant re-visits.

Perhaps the most successful exercise is Chapter V, "Selling the sacred: Reformation and dissolution at the abbey of Hailes [Gloucestershire]". A Cistercian foundation from 1251, much of Hailes' fame derived from its possession of "a vial filled with the holy blood of Jesus Christ" (165) given to it by a nephew of King Henry III in 1270. Hailes soon became "one of western England's major pilgrimage destinations" (165). It also became a target for those who doubted the veracity of relics and deplored the way in which they were used. "[...] the blood of Hailes was among a handful [of all the thousands of relics worshipped in English churches in the fifteenth century] singled out by Wyclif's followers as particularly odious and absurd" (167). The dissolution of Hailes thus appealed to evangelical reformers like the future bishop, Hugh Latimer, and worried or angered conservatives, but a numerous and extended community participated in the spoliation of the monastery and its property. When a royal commission investigated the matter in late 1541 they concluded that "[t]he plunderers [...] turned out to be [...] an enormous collection of local characters, from servants and artisans to priests and gentlemen" (162).

Shagan's object here is to discover the form and meaning of this spoliation. Revisionist scholars have argued that participation for economic gain did not necessarily betoken "acceptance" of religious reform. Shagan tries to show that participation had a significance. "[...] the majority of thefts and purchases from Hailes were conducted by people who, despite having no positive evangelical ideology, none the less knowingly laid claim to monastic property for thoroughly irreligious purposes. These people consciously and systematically committed acts that only a few years before would have been considered sacrilege and which, even more importantly, some of their neighbours still insisted were sacrilege" (192). Hailes, Shagan argues, was effectively desacralized; and desacralization, together with de-Catholicization was an important, implicitly "popular" step towards reformed religion.

Each of Shagan's chapters, despite the variety of subject matter, is an argument in favor of popular involvement and collaboration in the English Reformation. This sometimes leads to a tendentious quality, irritating repetition, and high flights of theory. The case is almost impossible to prove, because the evidence is scattered, and the true motive of the actors is notoriously hard to determine. No one, it seems to me, will come away from this substantial work of scholarship convinced that the revisionists are simply wrong. But by the same token every reader will have to acknowledge the complexity of the case, and the difficulty of denying local support. Without some degree of popular complicity and collaboration, the English Reformation would almost surely have failed. Its success is unlikely to have been entirely the triumph of (Protestant) Tudor administration. Historians will continue to debate the extent of that complicity, but Shagan has advanced and enlivened the process.