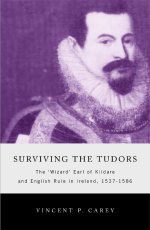 During the crisis years of the 1590s, the military decline of the Tudor nobility occasioned much comment, and some regrets, among Elizabethan officials. In modern times, too, historians have discussed the changing character of noble power in terms of the rise of a Tudor service nobility and an alleged crisis of the aristocracy. Under the Tudors, it has been argued, the influence of great provincial magnates like the duke of Buckingham and the earl of Northumberland was reduced or eliminated, and in their place ruled combinations of lesser lords (predominantly Tudor creations) and county gentry, whose power rested more on royal favour and patronage than on extensive possessions and a numerous tenantry. In this way, the Tudors managed to reshape the political system so as to curb the excesses of bastard feudalism and "overmighty subjects" and to encourage resort to law and the growth of more "civil" forms of society. The verdict of modern historians on this Tudor achievement has, moreover, been generally positive - supposedly, it fostered a more peaceful, united kingdom, and the growth of an English nation-state.

Yet traditional court-centred perspectives about the peaceful extension of metropolitan values throughout the provinces are far from telling the whole story - if only because the focus of this perspective, lowland England, is far from typical of the Tudor state as a whole. In Ireland and the English north, attempts to remodel the Tudor nobility and to promote "English civility" cut across the continuing need for resident marcher lords to defend the state's frontiers against Irish and Scots enemies beyond. Herein lay the dilemma faced by great magnates like the earl of Kildare: how to discharge their traditional role in defending the marches while concurrently meeting the crown's heightened expectations of its leading subjects in mediating between court and country and in fostering good rule and English civility in the provinces? Already in 1534 these conflicting demands had led to disaster in the rebellion of the ninth earl of Kildare, his subsequent attainder, and then the rehabilitation and restoration of his son, Gerald Fitzgerald, as eleventh earl (1554-85), when the mid-Tudor regimes discovered that marcher lordship provided a cheaper, more effective solution to the problem of defence after all.

Vincent Carey's important study of the eleventh (or "Wizard") earl explores many of the problems faced by these marcher lords; and in this context the eleventh earl's career is particularly revealing because the Kildares were one of only two Irish peers (the other being the Butler earls of Ormond) whose estate papers have partially survived for this period. The evidence concerning the earl's childhood and continental exile is disappointingly thin, but Carey uses the estate material to good effect to augment the traditional state-paper derived accounts of high politics with analyses of the earl's arrangements for estate management and local defence. The result is a perceptive and well-rounded study of Kildare's role in Tudor Ireland.

The book falls into two parts. The first three chapters analyse respectively the basis and operation of Kildare power under the early Tudors; the break-up of the Kildare estates following the 1534 rebellion and the circumstances which led to the earl's rehabilitation and restoration; and Kildare's subsequent efforts to re-establish his traditional ascendancy in the English Pale and the Irish midlands. The opening chapter is essentially an extended commentary on modern writings about the early Tudor earls. Some of this might more profitably have been deployed in the account of the eleventh earl's reassertion of his traditional ascendancy (chapter 3) so as to highlight the similarities and differences between Kildare power before 1534 and from the later 1550s. Kildare, as Carey shows, eventually recovered almost all his ancestral estates: together with his restoration of duties on Irishmen (particularly the border chieftaincies of the midlands) and reimposition of labour services, coign and livery, and customary renders, these allowed the earl to extract a princely income of around £ 3,000 a year from his possessions. Not only was he one of Elizabeth's wealthiest subjects, but his numerous tenantry supplied the earl with an extensive manraed which was central to the Pale's defence. (The dispersal and restoration of the Kildare estates is further illuminated by the material in appendix 1 outlining the transfer of Kildare lands in Leinster, 1540-1570, although the table might have been more useful had it distinguished between custodiams and short leases of Kildare land and grants of a more permanent nature.) Yet the earl never recovered the politically sensitive liberty of Kildare, and he also found himself hamstrung in other important ways - by the emergence of a more strident opposition from a County Kildare gentry now strengthened by New English soldier-settlers; by the insertion of the Leix-Offaly plantation in an area of traditional Kildare dominance; and by the appointment of unsympathetic (predominantly New English) officials to leading posts in the Dublin administration, particularly the governorship.

How the earl dealt with these new obstacles to his ascendancy is essentially the story of the second half of the book. In five predominantly narrative chapters, Carey deftly sketches Kildare's fluctuating fortunes in the increasingly polarized struggle for power which characterized later Tudor Ireland. "Kildare was never trusted enough to be appointed to the lord deputyship" (188), as Carey tellingly remarks, and so his influence was largely restricted to Leinster. Yet, from the 1550s, the performance of successive governors was no longer judged on "adherence to any consistent royal policy or [...] objective standard of competence, but on [...] faction at court" (105). Under unsympathetic governors (Lord Lieutenant Sussex, Lord Deputy Fitzwilliam, Lord Deputy Grey), Kildare faced a constant battle to win from minor officials and captains that degree of deference and respect which was the due of a premier peer. Conversely, governors drawn from the Dudley faction (Lord Justice Arnold, Lord Deputy Sidney) allowed the earl considerable latitude to pursue his own private interests even where these cut across the broad thrust of government policy. The result was that Kildare was, by turns, in high favour at court, entrusted in Ireland with such sensitive military commands as general of the Pale, and then imprisoned in the Tower or Dublin castle on suspicion of treason. Carey outlines these vicissitudes supremely well: Kildare emerges as a consummate politician who plays competently, even shrewdly, the hand of cards allotted to him. But it is not a particularly strong hand. He manages to outmanoeuvre the earl of Sussex and secure his recall: and, for some twenty years, he seemingly enforces religious conformity so as to preserve his vital court connections, while concurrently harbouring recusants in his own household - notably his son's tutor, Richard Stanyhurst, and notoriously, his countess, Mabel Browne - in order to preserve his local power base. Eventually, however, this politique in matters of religion ran out of options with the rebellions of 1579-83: "all you Englishmen are joined in one", he exploded at the Irish privy council, "and an Irishman can have no right or justice at your hands" (201-2).

Why this Tudor magnate ended up denying his English identity and imprisoned in the Tower for treason is of course the salient question posed by the last part of the book. Carey's discussion of political and religious developments in Elizabethan Ireland supplies a convincing answer in regard to the growing power struggle between New and Old English in Ireland. Perhaps the wider question prompted by the study, however, is whether royal policy in the frontier regions of the Tudor state was a realistic one. As the author rightly notes, "[l]ocal military and government service, and attendance at court and parliament were consistent with the role and function of a major magnate, forming an integral and important part of the duties of lordship in the sixteenth-century world" (121). Yet prolonged attendance at court was incompatible with the demands of frontier defence, and the replication of lowland English norms and values (what Tudor officials meant by "English civility") in a turbulent marcher society was, frankly, quite impossible. Under Elizabeth, moreover, Tudor government went a stage further by demanding conformity to religious practices which had little support outside lowland England. The result was that, within ten years, the enforcement on the Anglo-Scottish borders of similar policies which took little account of local conditions managed to provoke rebellion by the traditional ruling magnates there, the earls of Northumberland and Westmorland and the Dacre heir. In such circumstances, therefore, it is perhaps surprising that Kildare enjoyed the success he did. "Surviving the Tudors" is indeed a very apt title for this fine study.