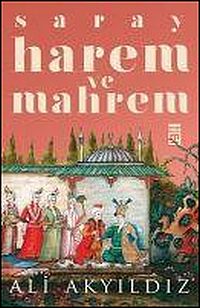 The harem was a major institution for the Ottoman court, whose members received palace education to serve the sultan. Their personal lives, struggles, expenditures and ventures are the major topics of research on the Ottoman harem. [1] Ali Akyιldιz has provided a contribution to the growing literature with his recent collection of articles Saray, Harem ve Mahrem/Court, Harem, and Privacy. This study includes several previously published articles and one new one, along with presentations given at symposia. The author specialises in the 19th-century Ottoman economy and the institution of the Palace at 29 Mayιs University, Istanbul, Turkey. Akyιldιz shares his findings meticulously and skilfully with his readers, using records drawn from various archives and the document collections of many other institutions. As a whole, the articles investigate the Ottoman palace life and the members of the imperial dynasty. Throughout the pages, Akyιldιz closely examines the family members of the Ottoman sultan; daughters, mother sultans, hasekis, concubines and their struggles in forming close relationships with the political authorities in the imperial palace.

The first article, "Osmanlι Devleti'nin Saray Teşkilatι/Ottoman Palace Institution," cross-examines the Ottoman sovereignty tradition, instituted by the amalgamation of the Oghuz tradition and the Islamic legacy. In this connection, Akyιldιz moves to the Ottoman palace to discuss the duties and powers of the sultan, along with the changes and transformations occurring over time. One of the changes that the author detects concerns the law of inheritance within the imperial dynasty. Akyιldιz asks the questions Who took the throne? What characteristics did the Ottomans seek in making a new sultan? He provides the necessary background information on the institutions of the Ottoman palace to the reader to familiarise them with the current literature.

The second article, "Padişahιn Ülkeyi Yönetme Merkezi Olarak Mabeyn'in Kuruluşu ve Gelişimi/The Establishment and Development of Mabeyn as the Administration Centre of the Sultan," tackles the foundation and development of Mabeyn as the sultan's physical base for overseeing the empire. Linguistically, the term Mabeyn refers to an in-between regarding two things that had been used for the room that connects the harem and the selâmlιk. According to Akyιldιz, the Mabeyn emerges as an institution created upon the abandonment of the Dîvân-ι Hümayûn meetings at the court and the physical shift of state affairs to the Grand Vizier's private mansion, which is also known as Bâb-ι Âli. Although the word Mabeyn is shown in the primary sources to have been used before, Akyιldιz notes that the fully-fledged establishment of Mabeyn, in fact, only took place during the reign of Abdülhamid I. This article is a unique contribution to the growing secondary literature on Ottoman imperial life, thoroughly examining Mabeyn as an Ottoman institution.

The third article, "II. Mahmud'un Hastalι??ι ve ...lm Etrafιndaki Tartιşmalar/The Sickness and Death of Mahmud II and The Debates Around It" addresses the historiographical debates on the illness and death of Mahmud II, Akyιldιz seeks to dispel doubts on this matter and presents the details of the sultan's illness, the time that he was in this condition and the events that took place during his death, comparing some of the claims and explanations made by the physicians who treated him after his death. From his thorough investigation, Akyιldιz concludes that Mahmud II actually had more than one disease, which we could describe as 'complications of pulmonary tuberculosis,' using the terms of modern medicine.

The following article, "Müsrif, Fakat Hayιrsever: Pertevniyal Valide Sultan/Lavish But Benovelent: Pertevniyal Mother Sultan," demonstrates how sultan mothers sought to obtain power and authority in administration. Akyιldιz particularly deals with Pertevniyal Sultan Mother who engaged in the state affairs, just like other sultan mothers of the 17th century. Because this sultan mother had a reputation for being wasteful and charitable at the same time, the author examines her life and expenditures, giving examples. To illustrate, the author notes that she would order presents for herself from women coming from Egypt. According to Akyιldιz, these were expensive, somewhat equal to double her own yearly stipend. Further, her expenses were noticed, but may have been seen as waste at the normal level for any palace woman at that time; however, she was also generous enough to spend a great deal on charity works when it was necessary. In addition, Akyιldιz corrects a widely assumed date of this mother sultan's death, which actually happened on 27 Rebiülevvel 1301 (26 January 1884). This determination is a significant contribution by itself.

The next article, "Cariyelerin Evlilik Yoluyla Padişahιn Hareminden Çιkmalarι Sorunu/The Issue of Leaving The Harem Off Through Marriage," offers a different perspective to the somewhat monotonous and classical slave narratives. The author first draws attention to the pattern by which the female slaves in the Ottoman harem consisted of captives taken as booty from battles during the classical period; [2] however, the bulk of the concubines in the harem were made up of mainly Circassian and Georgian female slaves purchased from slave dealers during the 19th century. Akyιldιz this time entangles the marriages of the sultan's concubines and inquiries whether the sultan approved their requests. Marriage meant departing from the imperial palace and, more importantly, exiting the imperial harem. In contrast to what one might have assumed, the author claims that the sultan himself supported those female slaves to establish their own lives outside of the imperial palace, offering help to cover their needs in return for their service and loyalty for the future. Even though the author does not intend to reveal slaves' agency, it can be grasped that the 19th-century female slaves could have relatively more agency than their counterparts who lived in the classical period. This article could have benefitted more from scholarship written in different languages. Even so, it is invaluable in terms of its sources and the author's study.

The following article, entitled "Osmanlι Saltanat Veraseti Usulünü Değiştirme ve Sultan Abdülaziz'in Yusuf İzzeddin Efendi'yi Veliaht Yapma Çabalarι/Changing the Ottoman Succession Procedure and Sultan Abdülaziz's Efforts to Make Yusuf Izzeddin Efendi Sultan," explores power struggles and the succession system in the imperial palace. The ekberiyet system, which was implemented under Ahmed I, the succession of the oldest member of the dynasty had been left during the reign of Abdülmecid I. Upon the social and economic tribulations that occurred after the Crimean War (1853-1856), Sultan Abdülmecid I was scapegoated, which brought the issue of succession into question in the eyes of the public. Even though new regulations were put forward by the Ottoman constitution of 1876 (Kânûn-i Esâsî) regarding the succession, Akyιldιz claimed that the fear and anxiety continued amongst the Ottoman princes till the end of the Ottoman Empire.

The next article, named, "II. Abdülhamid'in İlginç Bir Girişimi: Hanedan Teavün Sandιğι/An Interesting Initivitive of Abdülhamid II: The Imperial Relief Fund," discusses the economic initiatives made to secure the future of household members. Teavün Sandιğι, The Imperial Relief Fund, was intended to be established with the initiatives of Sultan Abdülhamid to help the members of the dynasty in difficult times. However, the author cannot provide a detailed analysis of this charity box in detail since there is only one document on the subject. Akyιldιz claims that Abdülhamid II put forward the idea of ??establishing a dynastic mutual aid fund or safe-deposit boxes (Teavün Sandιğι) to ensure the future of the members of the dynasty, but the establishment of the fund existed only in theory, and it could not become operational. In closing, it is fascinating to learn about the Ottoman safe-deposit boxes, which have been overlooked and understudied, also showing the competency and artistry of the author.

In the final article, "II. Abdülhamid'in Aynι Anda 9 Kadιnla Nikahlι Olmasι Meselesi/The Issue of Abdülhamid II's Polygamy with 9 Women," the author closely examines the marriages of Abdülhamid II. Because the women in the harem were mostly female slaves in the classical period, the sultans were allowed to have close intimate relationships with them without getting married. However, Akyιldιz shows the reader that this phenomenon altered during the final period of the Ottoman Empire. The polygamy of the Ottoman sultans has been a controversial issue among historians. Akyιldιz drew attention to the fact that almost all of the sultan's wives, the main subject of the article, were free Muslim women of Caucasian origin. Based on this finding, Akyιldιz concluded that Abdülhamid was married to 9 women at the same time; the author leaves the explanation of this situation to Islamic scholars. This article is a nice contribution that reminds us once again of the difference between theory and practice.

Thanks to his vast knowledge of Ottoman history and primary sources, Ali Akyιldιz draws a portrait of the harem that was one of the most important Ottoman imperial institutions. Meticulously and skilfully utilising archival documentation from different archives and collections, the author provides new insights and corrects certain misconceptions regarding issues surrounding the Ottoman imperial palace and its members. The author does not directly indicate the purpose of this study at any part of the book. Even though the consistency between the title and chapters of the book is not clear at certain points, which is a natural problem of compiling a book from separate articles, it is a highly recommended text for academic researchers and students who are interested in diving deeper into late Ottoman palace institutions.