Carolyn Muessig: The Stigmata in Medieval and Early Modern Europe 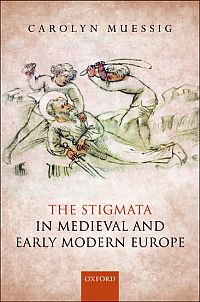 One of the most fascinating topics of the study of Christian religious experience is the stigmata and whether it is possible that human beings could bear on their bodies the very marks of Jesus' crucifixion. The foundational text for this phenomenon is Paul's Letter to the Galatians 6:17: From now on, let no one make trouble for me; for I carry the marks of Jesus branded on my body. What does Paul mean in this context? As Carolyn Muessig demonstrates so well in her book The Stigmata in Medieval and Early Modern Europe, there are at least three ways of explaining this phenomenon in the Christian spiritual tradition: "Dominical stigmata are the wounds caused by the nails and lance of the crucifixion that were in Christ's own body; Pauline stigmata are the marks corresponding to the hardship that Paul encountered serving God; personal stigmata refer to the suffering of an individual in the face of adversity in the name of Christ" (26). The phenomena of the stigmata, as we learn, is even more complex as there are protean stigmata (changing stigmata or diverse modalities of stigmata), self-inflicted stigmata, and appearing/disappearing stigmata. All these various types of stigmata are treated completely in this book.

The volume is composed of an introduction and six chapters. The introduction presents a historical overview to the modern study of stigmatology. Chapter one lays down the biblical and patristic foundations for the interpretation of Galatians 6:7 leading to the early medieval approach to the stigmata, highlighting the change in this phenomenon in the twelfth century with the focus on the movement from sacerdotal to dominical stigmatization.

Chapter two focuses on Francis of Assisi (1183-1226) and various interpretations of his unique experience of receiving the stigmata in his very flesh (at least until the thirteenth century).

Chapters three and four explore the phenomena of stigmatization of women that occurred after the time of Francis, with a special focus on the role of the stigmata in the life and spirituality of Catherine of Siena (1347-1380). Catherine was not officially recognized as a stigmatic until the seventeenth century even though she was acknowledged to have it - and she had asked God that it be invisible - during her lifetime.

Chapter five focuses on the role of women in the stigmata tradition, and its acceptance or rejection in late medieval and Reformation Europe. The final chapter considers the challenges that the stigmata phenomenon met with both Protestant and Catholic reformers of the sixteenth century.

The second chapter is of extreme interest for those, like myself, who are interested in Francis of Assisi and Franciscan spirituality. Visitors to the Basilica of Saint Francis will notice there are two stigmatization scenes that are of major significance: the stigmata Giotto painted in the 28-fresco cycle of the life of Francis in the Upper Basilica and the fresco painted by Pietro Lorenzetti. The latter fresco appears alongside the passion-death-resurrection cycle that shows how the compassionate suffering of Francis that leads to his stigmatization mirrors Jesus' own suffering and crucifixion. One sees imaged here the main Franciscan understanding of what happened to Francis on Mount La Verna in September of 1223, as Muessig states: "Francis did not bear the wounds metaphorically; they were not self-inflicted, nor were they like the crusaders who bore marks that looked like crosses; rather it was reported that the wounds appeared physically on his hands and feet with protruding nails and on his side as if he had been pierced with a lance" (61).

How is the stigmatization of Francis possible and what rationality could there be for this event in Francis's life? Two major reasons are presented by Muessig: Francis was the Angel of the Sixth Seal in Apocalypse 7:2: Then I saw another angel coming up from the east, having the seal of the living God and/or Francis was transformed into Christ (there was a bodily transformation because the wounds grew forth from his flesh). How is it possible for there to be such a dynamic change in matter that he would bear the very marks of Jesus' crucifixion? Muessig explores Francis' experience of stigmatization with the key concepts of desire, imagination, compassion, imitatio Christi, deification, representation, and the miraculous. In the exploration of the reason(s) for the stigmata of Francis, we enter the very depth of the mystery of the God-human relationship. We also learn in this chapter and subsequent chapters one of the main problems with Francis' stigmatization: was this a unique experience that no one else can experience? Muessig shows that this issue caused so much tension between Franciscans and Dominicans throughout the Middle Ages.

Overall, this is an excellent study that deals with so many essential religious, sacramental, sociological, political, and gender issues. The latter issue is treated so thoroughly - as many of the later medieval and early modern stigmatics were women - that this work could be considered a textbook on gender issues in the Middle Ages and a great introduction to medieval female spirituality. The fundamental question raised is whether women could bear the stigmata. If they can do so - and there were certain male authors who certainly thought that they could not - the main issue is to explain what types of religious experience leads them to bear in their own bodies the marks of Christ. Muessig fully explores the various ways of prayer, illness, liturgical performance, and participation in the sacraments leads to stigmatization. We learn about many known women (Catherine of Siena and Gertrude of Helfta) and previously unknown (Ida of Louvain, Elizabeth of Spalbeek, and Christina of Stommeln) whose spiritual path led them to their stigmatization. We learn much about the reasons why contemporary observers either supported or denounced these women who claimed they bore the stigmata.

Muessig should be congratulated because of her abundant use of so many primary sources in dealing with the issue of the stigmata: medieval religious literature - especially highlighted authors Bartolomeo of Pisa (c1350-1434) and Tommaso Caffarini (1350-1434) -, theological texts, hagiography, liturgy, sermons, and art. Many issues are discussed in this book, including the relationship of stigmatization and martyrdom (especially regarding the Dominican Peter Martyr); the role of penance, liturgy, sacraments, and religious devotion; and Franciscan-Dominican relations. It presents some of the most challenging religious issues including the relationship of God's grace and human activity and the role of imitatio Christi - how close can human beings come to living the actual life of Christ? It is very difficult to capture in a book review the richness of this most valuable piece of scholarship!