ARCHIV
Sie sind hier: Start - Ausgabe 21 (2021), Nr. 1 - Rezension von: Francis of Assisi: The Conformity of the Life of Blessed Francis to the Life of the Lord Jesus

Regis Armstrong / Wayne Hellmann / William Short (eds.): Francis of Assisi: The Conformity of the Life of Blessed Francis to the Life of the Lord Jesus 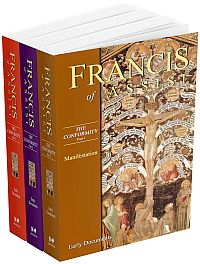 Several years ago, while researching and writing about various other medieval Franciscan authors and preachers on the resurrection of Christ, I came across a reference to Bartholomew's Conformities. The modern source stated that this text was not only rich in hagiography but also in theology, especially concerning the resurrection. Contemporary scholars Caroly Erickson, John V. Fleming, and Raoul Manselli have shown the importance of this text concerning Francis of Assisi and medieval theology.

This first translation into any modern language began at a book launch in 2001 in Canterbury, England, where the editors of the three-volume series presented their third volume, Francis: The Prophet, which includes documents from the 1350's to 1380 (the earlier volumes, Francis: The Saint and Francis: The Founder that cover the years 1228 to the 1350's). After the last presentation, one of the participants asked when the next volume would appear. The editors replied they had little or no expectation of moving forward because the next text in line was a difficult Latin text and ran more than a thousand pages, massive pages in the Latin critical edition of 1906 - nearly an impossible task (Liber de Conformitate Vitae Beati Francisci ad Vitam Domini Nostri Jesu Christi, in: Analecta Franciscana 4-5 (1906-1912)). The questioner, Christopher Stace, after nearly 20 years, completed this translation in three parts. William Short served as editor, and the other two editors of the original series, Wayne Hellmann and Regis Armstrong, helped shepherd the process and brought it into the New City series as the fourth volume of Francis: Early Documents.

As previously mentioned, the only translation of the entire Conformities is a sixteenth-century Italian translation that was never published. Only partial translations into German, Dutch, and French were produced, according to Bill Short, in polemical texts that were written to attack this as an example of late medieval foolish and erroneous exaggerated devotion to the saints.

This text was composed between 1385 and 1390 by Friar Bartholomew of Pisa (or Rinonico, a district of Pisa), who died circa 1401. Not much is known about Bartholomew's life or education except that he studied in Padua and Florence, and then received his doctorate in theology at Cambridge University in 1375. He taught theology in Bologna, Siena, Florence, Padua, and Pisa. Besides the Conformities, he also is known for a series of sermons from the 1390s on the Virgin Mary entitled De Vita et Laudibus Beatae Mariae Virginis Libri Sex and a series of Lenten sermons entitled Quadragesimale de Casibus Conscientiae.

I share my observations after working on this text: This text is not simply about Francis - like the earlier Lives of Francis written by Thomas of Celano and Bonaventure - but also especially about the conformity of Francis to Christ. Since one half of the Conformities is about Jesus, it is a treatise on every aspect of medieval Christology.

Bartholomew follows in the Franciscan literary tradition by structuring his book on an image of a tree as Bonaventure exemplifies in his Lignum Vitae. The work is structured into forty 'conformities' or fruits based on an image of a tree which is divided into ten levels, each level containing two branches. There are twenty branches that bend to the right and twenty to the left. Each branch bears four fruits, two of which belong to Christ and two of which belong to Francis. This means that both Christ and Francis have forty fruits associated with each of them.

Bartholomew explains the structure this way in order to bring the reader into conformity to Christ: "In elucidating these conformities, or 'fruits,' I have decided to observe the procedure of first speaking of Christ under each particular conformity, then following this with proof that the same virtue was observable in blessed Francis, trusting in the goodness of God, who waits upon us, sowing the seeds of good in us, and carries us through to the end we desire, and does not withdraw his powerful hand from anyone who desires to do good, but lends it readily."

It is apparent that our fourteenth-century author was familiar with many theological and philosophical texts of the Middle Ages, such as the various Summae and commentaries on the Book of the Sentences of Peter Lombard. He was familiar with earlier and medieval scripture commentaries and historical texts. Many of the issues of theology we find in the Conformities have their foundation in these theological texts. The Conformities is a Christological treatise with a corresponding hagiographical text alongside it, the latter being the major focus of the attention of Bartholomew.

The Conformities is significant because Bartholomew uses so many Franciscan and non-Franciscan sources. It shows us how a friar of the late fourteenth century understood Francis and his role in salvation history and his understanding of the identity of the Franciscans as followers of Christ. Bartholomew's place in the history of medieval Franciscan spirituality should be accessed not only by what he says about Francis' conformity to Christ, but also about his Christology per se. He provides his readers with a comprehensive compendium Christology in which he treats the life of Christ from the Incarnation, earthly ministry, establishments of the sacraments, passion and death, Resurrection, Ascension, and the sending of the Holy Spirit at Pentecost. Jesus underwent all these things to bring redemption to humanity but also to exhibit how friars were to be his disciples. The perfect disciple was Francis, who was the perfect imitator of Christ. Bartholomew wrote this not only to honor Christ and Francis, but to remind each reader that they too are called to be imitators of Christ in their own lives, just as was Francis in his.

Although the text's length is daunting, it is worth of time and energy to discover what Bartholomew has to say about a late medieval understanding of Christ and Francis.