Christopher MacEvitt: The Martyrdom of the Franciscans 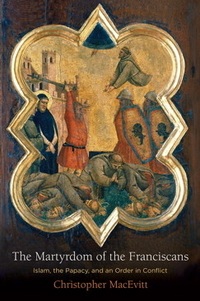 Those of us who teach courses that include sections on martyrdom in the Christian tradition will be challenged by this book, as it presents this theme in its complexity. It challenges us to look again at the motives of those who sought to put their lives on the line in their testimony to Jesus Christ and to ask difficult questions about these martyrs. What are the social and religious circumstances that would lead someone to seek martyrdom? What do the accounts of martyrdom tell us about the how and why of martyrdom? How and why are these acts of martyrdom remembered and celebrated in the community? What do they tell us about the attitudes toward the populace that will do the killing? These are some of the more significant questions that MacEvitt asks and answers in The Martyrdom of the Franciscans.

This book is not only about martyrdom in the early Christian tradition - and especially how it is experienced and remembered in the Franciscan tradition - but also about many other issues in medieval studies: how to live the evangelical life; the meaning and practice of evangelical poverty; Franciscan-papal relations (ecclesiology); and especially Muslim-Christian relations. Its central focus concerns the history of the Franciscan approach to martyrdom beginning with Francis of Assisi (1182-1226) and culminating in the fifteenth century, and how martyrdom influences all of these other aspects of medieval Christianity.

MacEvitt begins the book with a chapter on the complexities of Christian martyrdom from the beginnings of the Christian movement until the thirteenth century, "examining the ways in which passions and acta (the suffering and deeds) of the martyrs served different functions as Christian communities grew from small groups on the margins of Roman society to being intimately linked to political power, first of the Roman emperors then of medieval kings" (22-23). The second chapter brings us to an exploration of the Franciscan movement in the thirteenth century and its foundational approach to the theme of martyrdom, with a special focus on Francis of Assisi and his desire for martyrdom. The four subsequent chapters build one on the other, moving from the thirteenth to the fifteenth century regarding the change of attitudes toward martyrdom and its implication for the Franciscan approach to Islam. In each of these centuries, the friars had a different view on the nature of martyrdom and its relations to other forms of Franciscan life and ministry (e.g., parish ministry, eremitical life, preaching) and the vow of poverty.

This is a significant contribution to medieval Franciscan studies, interfaith relations between Christians and Muslims, and the theme of martyrdom in all its complexities. The most challenging aspect of the book is the explanation of why Franciscans wrote martyrdom accounts. As our author states in his introduction: "Franciscans recounted stories of their martyred dead for a variety of reasons, but the effect has been threefold: to further push apart Muslims and Christians by promoting narratives that essentialized Christian salvation and Muslim damnation; to articulate a new Franciscan piety built on the humility of the martyr rather than the poverty of the friar; and to recast Christian understanding of martyrdom, taking what had been primarily understood as a conduit of divine blessing and power to the human world, and making it instead a gesture that offered little hope of divine intervention" (8). These three themes are highlighted throughout the book.

One of the most noteworthy features of the book is the almost exclusive focus on primary sources - medieval manuscripts and their history - and a very careful and nuanced interpretation of them. This pertains to the Vitae of Francis of Assisi, the Chronicles of the Twenty-Four Ministers-General - a late fourteenth-century text that is the primary source for this study - and several accounts of friars being martyred in the later medieval period. The martyrdom accounts are especially important for his study, especially the martyrdom of five friars in Morocco (1220) and four friars in Tana (India in 1321). MacEvitt bases his reflection on analyzing the manuscript tradition, the identity of author(s), the worldview of the author(s), and the interpretation by subsequent generations of readers of these texts. He especially focuses on the reasons why they were written and how they were interpreted in the intra and ad extra dimensions of the medieval Franciscan tradition.

Evangelical poverty has been a major topic of controversy since the very beginning of the Franciscan movement. MacEvitt's book offers a different lens to view this issue by showing that for the friars of the fourteenth century, martyrdom offered another model of Franciscan piety that could replace the model of the friar who embraced absolute poverty as the true follower of the poor Christ. Franciscan life and spirituality was even more complex as MacEvitt shows that the contemplative-friar (evidenced by the life of Brother Giles, one of Francis' earliest and close companions) along with the martyr-friar were two parallel models of Franciscan piety. We can add the preacher-friar to the mix as many Franciscans in the fifteenth century followed the model of Bernardino of Siena. [Italian scholar Giacomo Mariani pointed out to me recently that there is the short story about Roberto de Lecce (a famous Franciscan preacher of the fifteenth century) written by the Ferrarese humanist Ludovico Carbone (Ludovicus Carbo). According to the story, Roberto was once questioned whether he believed the best way to lead a Christian life was by preaching and hearing confessions or by pursuing martyrdom and he answered: "As for myself, I prefer preaching and confessing"!] We thus have competing models of Franciscan sanctity based on the primary focus of the activity of the friar: pastoral work, teaching, itinerant poverty, contemplation, martyrdom, or preaching.

We are still in need of a comprehensive study of the history of Franciscan-Muslim relations from the thirteenth to the fifteenth century. This book gives us an excellent foundation to achieve this goal as it gives us a presentation on Franciscan attitude toward Islam through the lens of martyrdom. What is troubling about the author's findings - for those of us who believe that Francis of Assisi's experience was a positive one of medieval interfaith relations - is that there was very little interest among the medieval Franciscans in a type of Convivencia (living in peaceful coexistence as one of the models of Franciscan witness of the Franciscan Primitive Rule of 1221 presents). There does not appear to be much motivation to seek the conversion of Muslims either. Rather it tells us that the early Franciscan martyrs were solely concerned with their own salvation by dying a martyr's death and not martyring themselves for the sake of the salvation of Muslims. The claim that the conversion of Muslims is verified in the Franciscan preachers of the fifteenth century as they actively preached the Crusades - especially against the Ottoman Turks - and devoted their sermons to demonizing Muhammad and Islam to show to a Christian audience that Muslims represented what was evil in the world. Franciscan preachers employed Muhammad and his Muslim followers as moral references for the conversion and strengthening of the Christian faith.

Anyone who is interested in the history of Christian belief and practice, martyrdom, medieval Christian-Muslim relations, mendicant spirituality, and Franciscan studies will find The Martyrdom of the Franciscans a valuable piece of scholarship and educational tool.